RAEF tells a slice of life story in the apparently ongoing adventures of a paranormal private investigator named Alice. In that she investigates the paranormal, not that she is herself in any way supernatural. As the game opens we learn that she has been called in to investigate the mysterious disappearances that are taking place at Eldelwats (or possibly Edelwats, the spelling changes from moment to moment) Manor. The previous owner apparently recently passed away intestate and his relatives are scrambling to lay claim to the vast property and estate, but it appears the house is more than it seems. Anyone who enters is trapped inside and soon after disappears, after 10 such occurrences the remaining family members decide discretion is the better part of valour and called in a professional. Enter Alice.

Taking the case head on, you start inside the mansion, as the doors lock themselves behind you. Now your only option is to decipher the clues you will find and ascertain just what is going on and why those who have ventured into this place before you have never returned.

Firstly though you're going to have to deal with a plethora of spelling and grammatical errors, from the ever changing name of the mansion and the family after which it is named to ones that had me scratching my head like 'Fourier', which wasn't in fact some obscure reference to analysing periodic functions, but was a bizarre misspelling of the word 'Foyer'. I suppose the fact it shows up on screen every time Alice walks into the vestibule of the mansion should have been a clue.

Still comprehension issues aside we now run into aesthetic ones, none of these rooms have walls. Actually that's not true; they all have a wall at the northern end, but none anywhere else. It looks as if they are suspended over a yawning void, and not in a creepy setting the mood sort of scenario, more in the 'I couldn't be bothered finding the right tiles' kind of way. 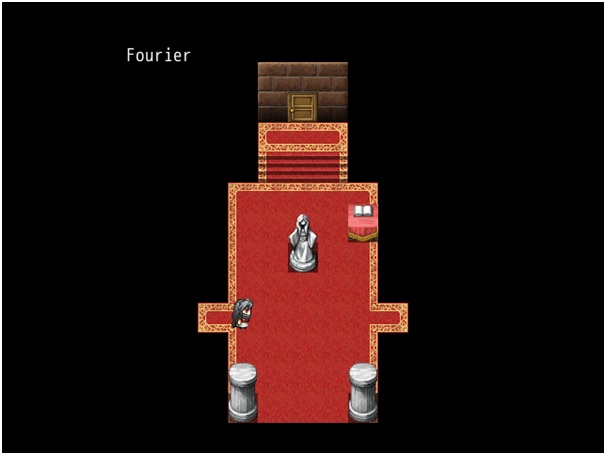 Don't even get me started on the square shadows.

Since I'm covering the aesthetics here I may as well go over the rest, most of the tile sets are RTP, with the addition of the evil castle pack for the darker parts of the mansion in which there are passage errors aplenty. The sprites have been customised to a small degree, and the music is likewise all RTP for the upper portions of the house with a less common track for the basement. The music is quite disappointing for regardless of the limited options available in the default selection, there is no sense of suspense or fear carried in any of the musical selections chosen, and even the non-standard track is discordant rather than disconcerting, and given its distinctly oriental tone, completely out of place. For a game that puts itself squarely in the horror genre, with messages written in blood, disembodied screams and jump scares the atmosphere is distinctly lacking.

Still since Alice is trapped in this place until she can discover the cause of the disappearances there is no choice but to venture on and see what the rest of the mansion has in store. Soon enough cryptic messages make themselves known, and half seen figures flicker at edge of vision. Well actually fully seen since there are no darkened lighting effects to give those moments any depth. A few riddles are presented to Alice to enable further exploration but none of them present a penalty for not interpreting the clues correctly, so it becomes a simple trial by error to ascertain the correct sequence to unlock the next door in your linear trip through the mansion. 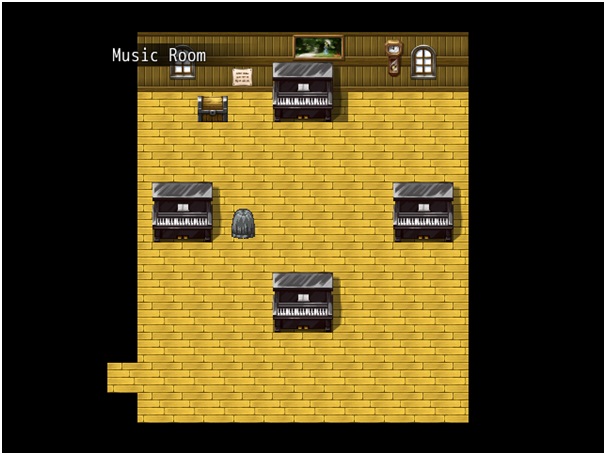 What sort of music room only has pianos? Surely it's the Piano Room.

I say mansion, but really very little of it is seen and nothing that is available gives the impression of something grandiose and stately and worth the sort of money outlined in the opening sequence, other than the overabundance of keyboard instruments. The place is actually quite sparse, minimally furnished and rather drab. Whilst it could be argued that all the action goes on below stairs the place is set up to be a grand home that has been handed down generation after generation, there should be some antiques and family heirlooms scattered around to reinforce that impression.

Downstairs however is where the real action is meant to begin, here the lack of containing walls is less of a hindrance since the not only is the overwhelming palette grey and black with the occasional virulent purple or splash of crimson to highlight, the mood lighting has been dialled to zero. In other words you can't tell there aren't any Eastern, Western or Southern walls because you can't see the Northern ones either. Whilst that is an improvement of sorts I'm having a problem with Alice being so incredibly blasé about some of the information she has been provided, evidence of a dark ritual, wow I guess the wealthy have unusual interests, blood stained tables and emaciated bodies in cages, wow rich people have strange hobbies. Seriously? Not I'm obviously in the home of a psychopath and mass murderer; I really need to arm myself with one of the conveniently located surgical implements that have been left lying around the bespattered laboratory. No we get a running commentary about the pastimes of the rich and murderous. How did this woman ever earn her PI badge? 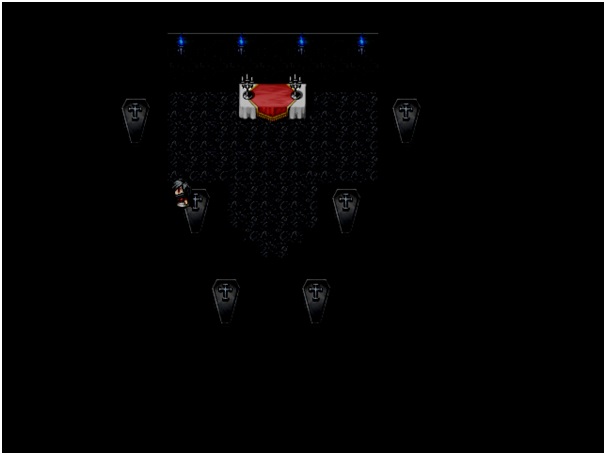 Time for a little coffin-top dancing, it'll fit the mood.

So unarmed and seemingly unaware Alice ventures deeper into the catacombs below the manor, and finds walls! Honestly, there are finally walls, in a long passageway whose only other feature is a save point, so you know there is danger ahead, but Alice blithely continues and eventually comes face to face with the completely non-surprising perpetrator of all this carnage and mayhem. The dénouement is fraught with overacting and the final scene reduced to a fade to black and an inexplicable escape. There must be a, thankfully, invisible deus ex machina somewhere behind the scenes as that is only explanation for Alice being able to avoid her perfectly justifiable fate. Honestly the woman deserved to die in a madman's dark ritual, she missed every clue that let her know what was in store and just rushed headlong to her doom.

If the developer would like to make something of this, I'd start by fixing up the spelling and grammar errors, spend a bit of time sourcing some atmospheric music, have a look at a few mapping tutorials, grab a copy of one of the many available lighting effect scripts and most importantly imagine themselves in the shoes of the protagonist. Given the clues provided and the evidence available, what would you do to survive? Oh and remove that little cut-scene from the epilogue. Her words aren't a bad way to end the game, but that surprise cameo isn't a surprise and actually reduces the impact of her speech.

As it stands I really can't recommend this game; it is too light for a horror, too thin for a mystery and too simple for a puzzle.