Power from the people

One thing I do have to say for the McBacon Jam games they are introducing me to some interesting dynamics and game play styles, but then that was one of the points of the event, to mix and match people who had not made a game together before and see if their differing skills and attitudes could be combined to make a workable game. Disparity is the product of the work of NeverSilent, suzy_cheesedreams, Yellow Magic & TungerManU a group of people who I've seen around RMN for a while and who have most definite areas in which they excel so a combination of their talents was always going to have interesting results.

Following the theme of deprivation and/or abundance in the jam, the developers have applied that yardstick to the magic of their world. Magic it seems is the power source behind the smooth running of the world, the fossil fuel equivalent and just as capable of being exploited. The problem with that scenario is that it appears magic itself is sourced from people, or from those capable of doing so. Which makes them a resource, one on which the city-dwelling haves of this desolate world rely. Enter Ciss, a mage of no small power newly fled from the security and restrictions of the cities and their teaching academies and her mentor Zilla, who wishes Ciss to expand her potential without restrictions or guidelines, which sounds very open-minded on the surface but you have to wonder about her motivation. 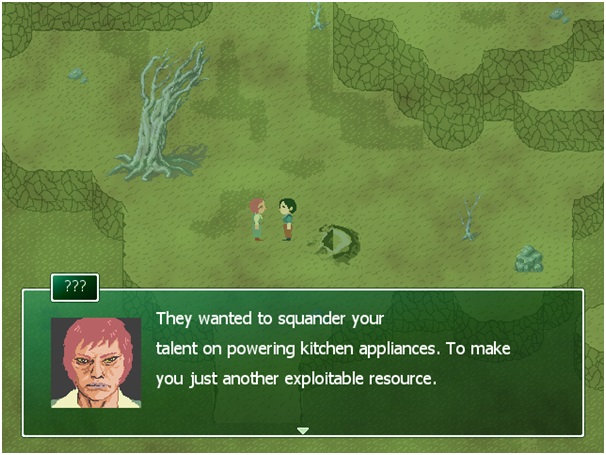 Ciss is a toaster (every ST:TNG fan out there got that reference).

Still in this inhospitable and olive tinted wasteland you make friends where you can and Ciss and Zilla seem to be fairly well paired, whatever their reasons for choosing each other as companions. Speaking about the colour tint I do have to make mention of the custom art in this game, it's raw and realistic which is suited so well to the game world. The faces of these characters are haggard and worn, as you would expect from someone trudging through a wasteland where the wind never seems to stop and everything is blasted and dead as far as the eye can see. The palette of the game is done in shades of drab green, grey and bleached white, it's a depressing and deprived world and everything visual backs up that impression. The sound effects and music also aid in that barren and desolate feeling, there is nothing warm and welcoming here and you are left in no doubt that life is lived on the edge of a knife.

In this bleak landscape roam bandits which have recently absconded with some of Zilla's magical artefacts and she is determined with Ciss's help to retrieve them which leads us to the combat. This can be summed up in two words, innovative and complex. One is interesting the other unfortunately diminishes the first. Distinctive combat systems are to be applauded, in some ways simply for the sheer amount of effort creating such a thing involves, but there is a point at which the novelty of it can't alleviate its issues and in this case that happens fairly early on. I actually really liked the stated reasoning behind the style of combat, Ciss has trouble channelling and focussing her raw magic, which means it can at times be as much a danger to her as it is to her opponent, and this combat system does apply that restriction in a concrete way, but there is a point at which narrative must take a back seat to practicality. 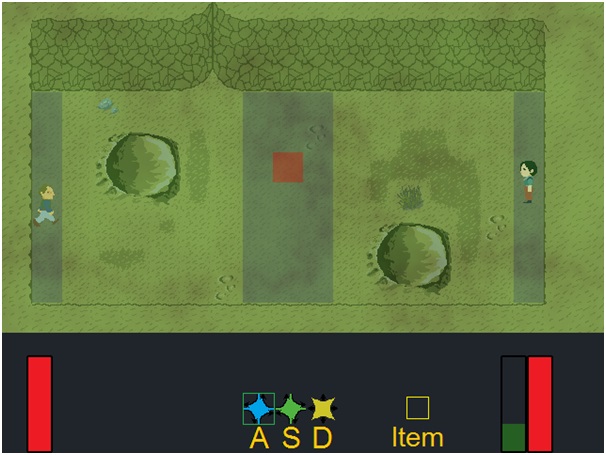 The premise is that Ciss's magic bursts from her with little warnings and less control, it is Zilla's role to provide a form of direction and channelling for that magic by way of a series of reflectors. three types are available, linked to keys A, S & D which can either reflect bolts clockwise or counter-clockwise or back towards the caster. The latter sounds ridiculous until the next set of instructions comes explains that yellow reflectors which is the bounce back version change the bolt from destructive to healing, whilst the blue and green reflectors amp up the destructive power of the energy and turn them into area of effect blasts. Wrapped your head around that yet? Because there are additional conditions; only three reflectors can be on the field at any one time, they cannot be placed next to each other and whilst you can have multiples of the destructive reflectors you can only have one healing reflector at one time.

All of this information is presented at once, which given the fighting style is unavoidable but any combat instructions that take 15 text boxes to impart is too complex. Especially when you add the fact that the placing of those reflectors is a two step process, choose via A,S or D and then enter to confirm that means any of the impetus of a quick and reactive combat is lost. It just becomes frustrating; to the point that at times I simply stopped placing anything other than a single reflector type in a reaction defensive position and relied on dumb luck and random movement to get me through the battles.

To add insult to injury there is no growth as a reward for all that bobbing and weaving, as there is no experience curve within the game.

For some people the finger dancing, memory reliant, quick response type of combat would be ideal, for me it detracted from the overall feel of the game. I would be more than happy to play a toned down version of this or one that ramps up complexity on a curve, but as it stands it reduced my enjoyment markedly. Which is a shame because it is indeed innovative and interesting it's just not practical, or at least not for this player.

The entire idea of the reflectors is actually a bit of a difficult one for me to rationalise in a narrative sense as well. Zilla is supposed to be teaching Ciss how to channel and control her magic, but in practice she is simply providing a way of directing the raw energy herself without teaching Ciss how to control herself. That seems to contradict the mentor/student relationship and smack more of an exploitative arrangement, with Ciss providing all the talent and energy and Zilla directing and benefiting from it. Which is supposedly what Ciss left the city to avoid. There is just something about that relationship that does not ring true for me, and that intrigues me on a whole other level. These two women have a strange but appealing connection and I find that I truly want to know more about what motivated them and why they have become the people they are.

Some clues are provided towards the end of the demo when the leader of the bandits who stole Zilla's equipment is revealed to be an old acquaintance of hers, but that just raises more questions than it answers. 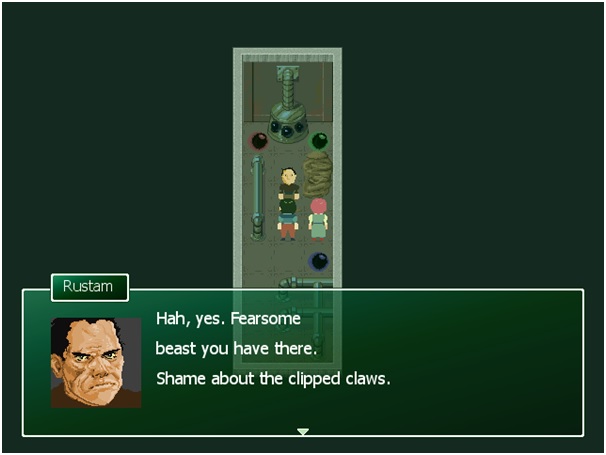 That is text-book enigmatic, right there. WTH does it mean??

Unfortunately given the events that unfold directly after the confrontation with the bandit leader and then the ending of the demo those questions remain, which is a reason to revisit this game when the development team have caught their breath after the frantic pace of the game jam. Even though I will have to steel myself before I re-enter that combat fray.

Close
02/23/2015 06:10 PM
Nhubi, I would have liked to give an insightful and well thought-out reaction to this review - but I can't because there is nothing left to say. You hit the nail on the head with all of your observations, and I don't think there is a single point you made that I disagree with.

Thanks a lot for writing this review. I appreciate it a lot, and I can promise I'll do all I can to iron out the weaknesses of the current version in the future.
nhubi

Close
02/24/2015 02:45 AM
Whew, I'm always a trifle anxious when I submit a review with a hefty dose of negativity, and also always hope that the dev will take my criticism as constructive, but it's you NeSi so I really needn't have worried.

I do really like hearing from a dev the reasons why they chose a particular course or mechanic in a game especially when it conflicts with what I thought they were attempting to achieve. So I am a little disappointed I didn't get some of you insightful and well thought out reaction, but am simultaneously gratified my points were well conceived enough to resonate with you.

I look forward to the next iteration of this game, and being able to give it a score commensurate with its value.
pianotm

Close
02/24/2015 03:17 AM
I had praised the graphics in my own review and received a somewhat uncertain response. I'm glad I'm not the only one who likes these visuals.
nhubi

Close
02/24/2015 04:11 AM
I'm not sure 'like' is the correct term, appreciate would be closer to the mark. I personally don't like this art style, I've seen Suzy's art thread and whilst I can see the merit and artistry in her work I don't find myself responding in an empathetic way to the raw images. However it is very well suited to this world and this setting. Raw and vulnerable, haggard and desperate are characteristics the denizens of this reality would have and the visuals back up the narrative exceptionally well. I can't fault them in any aspect and indeed believe the game wouldn't have been as impressive with a softer hand at the brush.

I don't tend to read reviews by other people on a game I'm intending to review myself, so I'll pop over and have a look at yours now.
Pages: 1