An incomplete work of art

Why do I review incomplete games? Because the reason why they are incomplete is the fact that they were really ambitious projects, full of features and good looking graphics.

Well Ascendance is one of these demos that I think should be played!
By the way let's start reviewing the three parts of the Ascendence demo:

Part 1 - The professor in the city
In this part, the longest of the three, you play the professor, that is a non-combat character, in fact, his answer to any uncomfortable situation is.. running away! And yes, he will find himself soon into trouble even if he does not know why!
I think that this part has the best maps, the sci-fi city is well made, crowded with lots of different individuals, some of them well animated.
Back to the professor: as I said before, after a short introduction he will find himself hunted by some goons, and you have to help him escape. Here you will learn the basics of the system, like the little quick time events. A nice thing is that you have also different escape routes depending on your choice! And also an arcade part in which you drive a moped, and some kind of puzzle in which you have to climb crates and escape from a dead end street. This is not your usual jrpg combat-filled exploration. I liked a lot the sense of dread of playing a fearful civilian and also the strange situation he finds int, that, of course, is never explained. 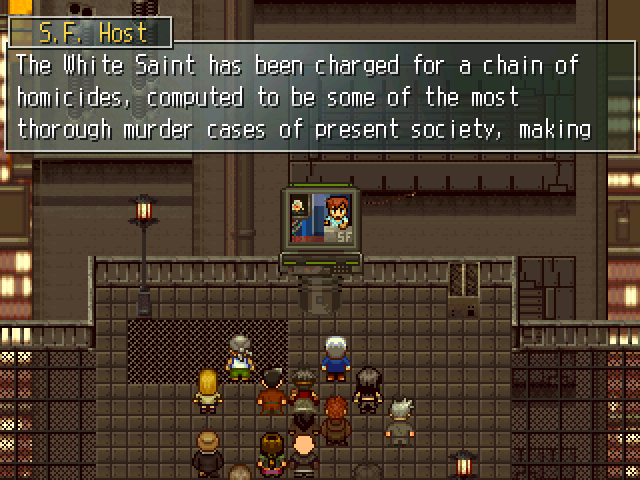 Part 2 - The warrior on the train
In the second part you play Cyrus, a warrior that can conjure a s̶p̶e̶a̶r̶ ... hm no, let's say a weapon, and fights some soldiers. YES! Finally we fight! Combat is more or less the same we are used to, except for one important difference: EVERY move, even the basic attack, consume PSI points, that are earned when you defend. You have stronger attacks that costs more PSI points, of course, but also a couple of basic attacks that are more or less powerful, depending on the opponent type. Since you do not have a ton of hitpoints be ready to use the medikits, and do not be too cocky! Combat is fast and furious, and you are also outnumbered, so you have to be fast.
Here too we have quicktime events (to avoid gunfire) and minigames, like dodging those annoying passengers that wants to capture you. This part end with a boss fight, of course!

Part 3 - The mercenaries in the forest
This part is the shortest of the three and for the most part consist of a loooong serie of cutscenes. But hey they are good, the scenery is really well done, and you have the opportunity to fight again, using a different character, a female mercenary that uses a bazooka like a club (!), but she can also use her weapon in the traditional way, if you use more PSI points (doing more damage and hitting every opponent). 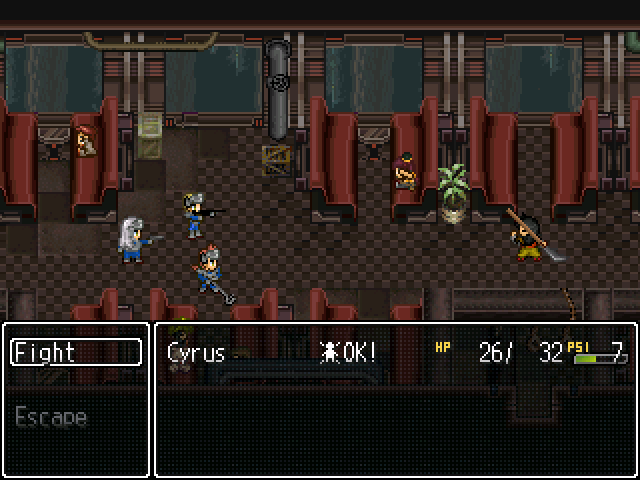 The Verdict
Ok, I can't judge the plot, since most of these are just situations that probably would have been connected in the full game (that unfortunately we will never have).
But I can judge everything else: dialogues are well done, maybe there is one typo somewhere (but I am not that sure... well I think I noticed it in the thir part, but I should play it again!) but there's a lot to read and everything is well written. Characters are totally different: we play a fearful professor, a honorable warrior and a hot headed mercenary, but also the secondary characters are memorable, like the White Saint, the two slow-witted goons, the leader of the enemy soldiers, the mercenary chief... yes, they are well characterized with different manners and style that really makes them different and memorables despite the shortness of the game. And yes I wanted to see more!

Music and sounds are good, but graphics are even better. The background chosen fits well every locations and they fit well the scenery and the maps (I am speaking of the city backgrounds, the forest in the train part and the mountains in the forest). The style used to rapresent the characters is the usual Rmk2003, but with lots of edits, custom poses and animations. Also lots of differently dressed characters in the city part and on the train.

Bad things? Well there are a couple for example the difficulty spikes of some parts like the escape with the moped, or when you have to move unnoticed. Combat is also not that easy, even if I was defeated only the first time, then I became used to the system and I was able to win every fight!
Another thing I did not like is that you can pass through some walking characters in the city, and well, probably this was an overlooked detail.
Oh and also no facesets, unfortunately (except for Cyrus, but only when you save).
Last, you can find yourself annoyed by the long cutscenes in the last part, but hey, it's the last!

So this earns a 4 but if it would have been longer and with a coherent, well developed story, it would have earned even more. Anyway what we have here it's still good, very good!