0 reviews
Akki, Lili, and Rhys had just arrived at the biggest city in the world, Anilopolis, where the Animus World Championship is being held. As they went to buy their tickets to see the matches, little did they know that they would end up standing in the middle of the arena themselves. After a mysterious boy appeared and gave them three Armillagers, a device to control Animus with, their lives changed tremendously.

Migdal is an original RPG with monster breeding elements, similar to Pokemon or Digimon, made using RPG Maker VX Ace. The story's tone and direction is inspired by Shin Megami Tensei (particularly the Devil Children series), while the art style and direction are heavily influenced by Tetsuya Nomura's works such as Kingdom Hearts or The World Ends With You.

The game is estimated to have a 3-4 hours of gameplay with several endings. In this game you only have the control of three monsters, which are referred to in the game as Animus. These three companions could be 'transmogrified' into another form after a certain level, rebirthing them again from level 1 but with the previous skills intact. This process will repeat throughout the game as you train your Animus, learning new skills and forgetting old ones (due to the 8 skill limit), the kind of party member your Animus will become depends entirely on your playstyle and how you train them.

In the game there will be only one dungeon, which is the Tower of Babel that stood in the middle of the town. The dungeon will be auto generated each time you enter it, and the main goal of the game is to explore the tower to the top, training your Animus while participating in matches at the tournament to aim for becoming the world champion.

The battle system is currently being designed.

Migdal is sort of a challenge to me. I wanted to see if I could make a game using my own art and style, and this is what came out of it. Migdal is in a way the culmination of what I liked as a kid put and meshed together into one; so far I've only been doing anything I want without a care about anything else. I'm doing most of the work for this alone, but I do have some help from aria, who will be handling all of the monster art and designs. I used several scripts form other people too, and on top of that I also have accha who gives me guidance and other helps here and there. As for what I actually do, I am creating all the art assets apart from the monsters, programming and eventing, and composing original soundtracks for the game.

Regarding the music, the whole OST of the game will have vocals sung by the Vocaloid Aoki Lapis, including town theme or battle music. This might put some people off, but I've always wanted to make vocal OST for a game after I played the PSP game '7th Dragon 2020' (which also has full vocal OST with a vocaloid). I decided to challenge myself and do exactly just that here in this project.

All in all, Migdal might not be the most original thing out there, but I am going to put all my love and effort in this game nevertheless.

So it's been quite a while since I put up the game here. It's time for some actual updates!

I haven't been able to work on the game itself, but resources development are still going along nicely. Resources as in graphics and audio, that is. Well, in this blog post I will try to keep you all up to date with the things I've been up to and where the game stands now. Hopefully I won't keep you all bored reading this /shot

I recently contacted a friend of mine who has years of experience in programming, so we are going to stop developing Migdal in RPG Maker Ace and will move on to Unity instead. This will open up a whole new possibilities for us.

If you read it, you can see that the whole battle system will revolve around "Finish the battle in one turn or you're probably screwed" mindset. Do you find this system interesting? Will you get bored of it overtime? Please tell me what you think of it. A lot of constructive feedback would be deeply appreciated! The Animus' actual forms are nowhere near that cute though (Usually that is, since there are quite a few cute ones among them if I say so myself! xD). In the game you will encounter 3 starter Animus. Feroc, Wagumo, and Iriaris. These will be the Animus the players will start with. Some of you may say they look too powerful for a bunch of starters, but that's the approach we want to give in the designs. All monsters stand on the same level and can be just as powerful as the others. So if you'd like you can even use a starter animus to beat the last boss (after a lot of transmogrification of course).

As you can see, I've been maintaining the TWEWY-styled look!

And I think that is all I can show you all today. Last but not least, let me put our game's Mascot here to close up this post. This is my favorite out of our designs so far! ;w;

Close
02/22/2015 02:29 PM
Well that's an insta-sub. This sounds brilliant. Good Luck and keep your chin up, this looks and feels ambitious but I'm sure you'll be able to pull it off successfully.
Raze

Close
02/23/2015 01:26 AM
The art style and the use of vocalized music for OST reminds me very much of The world ends with you, still one of my favorite games of all time - game play wise. Looking forward to it and good luck completing it :D
unity

Close
02/27/2015 02:10 AM
Oh my gosh, this project looks amazing! SMT inspired gameplay, with Nomura inspired art work? And monster training? This walked straight out of my dreams, lol. Totally subbing! Good luck you guys, I can't wait to get my hands on a copy. :3
seacliff217

Close
02/28/2015 12:31 AM
This game looks promising. The coloring style kind of reminds me of The World Ends With You on the DS. I really hope to see this one get more attention.
DaniMally 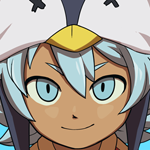 author=oddRABBIT
What script did you use for the random dungeon?
Looks really good, by the way! I'm looking forward to this game!