Decision is a short game made by Nydan, and later translated into english (but the translation is quite good, so do not worry!).
The game is short and the premise is VERY simple: Joe is our alter ego and teenage protagonist, and he loves his best friend Ayu... so how can he confess his feelings and exit the friendzone?

Good question! In any case this is just the beginning of a short story that will have some supernatural events that will turn the story into a dark adventure (not unlike Death Note... just to make a comparison to something more similar to a urban legend than to classic horror, mind this!), and after a puzzle (that will be the only one of the game and frankly I hated it!) there will be the real important decision that will determine the fate of Joe and Ayn.

And trust me, no matter the choice (that won't be easy) it will not end well, and this is almost surely how any player's first playthough will go!
Then there is a little hint that is an advice and may help reaching the good, golden and perfect ending.
The gameplay revolves around multiple playthroughs, and you also keep the achievements collected each time, some are earned getting one of the four endings, others performing some particular actions (like running around a lot or feeding the fishes, for example).

Visually there is not much to say: there is a total of five maps, and a couple of them are used only in cutscenes! The setting is for the most part modern and they use the futuristic resource pack, but many areas would probably have benefitted with an addition of more details to made them look less generic and add to the atmosphere of the game. Speaking about amosphere, I found the one of the small maze quite excellent due to the ambient background sound and the use of restricted visual. Little things that nonenthless added a lot! And I also liked the custom loading scene with the girl, even if it looks a bit out of place in this dark adventure, anyway it was nice| 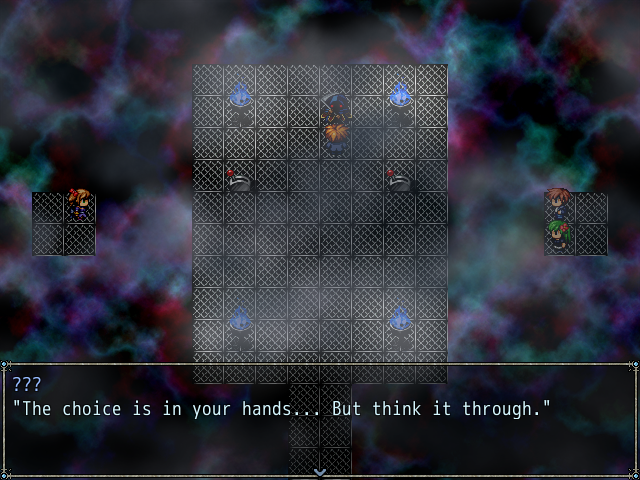 ok, now this is THE Decision!

Now, this was the aestetic, speaking about the game, it's a sort of interactive visual novel... and the story is very good! For some reason both the bad endings are very well written and they are more or less perfect conclusions to the story. The good, best ending instead is... a bit meh! Since it practically skip and does not add anything else to the story, except for let our protagonist earn a happy ending. Nah the best ending scenes are the bad ones for sure, considering also that one of them also concludes the "dark cycle" that seems to repeat... at least this is what appears! But yes, many backrground details are never explained or explored at all!

Final Verdict
Decision is a short Visual Novel that seems to be heavily inspired by some kind of urban legend. It's simple and also a bit simplistic, anyway it's a well told and interesting little story. While I did not liked every part of it, in the end I enjoyed this dark adventure, despite this would have benefitted by more detailed protagonists.
I only found one bug: the dark "stain" of particular location was kept even after the *death and rebirth* of Joe to start the second playthrough! And from what I saw on Youtube, I was not the only one that experienced that! But yes, it's a really minor thing, not that there is a lot to do and see in this game.

In the end this is a short but original story that I liked for many different aspects: how it is developed, how it is told and how it concludes. It's... particular and while not perfect, it stands out! 3.5/5!