Twilight Fantasy starts with a short pithy introduction, outlining the history of the world and the great Shadow War that took place 1,000 years previously and the predictable rise of the mysterious hero destined to overcome the evil overlord and sacrifice himself in the process. This hero came from and was eventually buried on the little island of Hardin, and in this place our story begins. 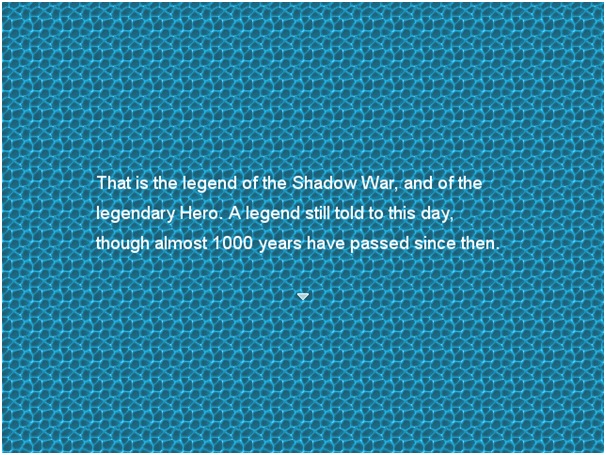 So 'our' hero, Sirria - a trainee swordsman, awakens in his home after a restful night and goes about his daily tasks, one of which involves visiting a local professor of archaeology and antiquity who sets you on your first quest; to go and rid the local ruins of the homicidal bats that have recently infested it. So off you dutifully trot, after robbing every house in the town and cracking a clever little puzzle for the first locked chest, using the alphabet's numerical values as the combination to the lock.

These ruins look indistinguishable from a cave system with no man-made structures to be seen, but there are bats and that is what you've been sent to attack so away you go, eventually slaying them all including the quite literal 'Big Bad Bat' in the penultimate cavern and then being called into an underground antechamber by a mysterious whispered voice that leads you to the Sword of Shadows. This blade was once wielded by the legendary hero himself so touching it of course knocks you unconscious, and when you awake after having been retrieved by the same guy who was too frightened to venture into the ruins previously you are sent by your suddenly brave professor to discover the origins of the blade and why it has miraculously reappeared after 1,000 years. Veterans of RPG's will know exactly why, but let's not spoil it for our somewhat naïve hero, shall we?

So after a short trip off the island and an explanation and first person example of just how dangerous the shadow sword is Sirria and his new recruit Illuminate Illumire head off to try and discover just how to break the connection between Sirria and the shadow blade, running into a number of glitches along the way. This game is technically a demo but since the last time the developer worked on it was 5 years ago I feel pretty safe in assuming that it's not going to ever be more than it is right now. So there are a number of cut scenes where the character you are talking to simply disappears whilst you are engaging in conversation, not walks away, the sprite just disappears. Other times the music fails to continue after a single loop, whilst inanimate objects change shape when you interact with them, signs being the prime example of this phenomenon. My personal favourite is however the sprite on speed glitch, wherein whenever the character has a cut scene where he moves with alacrity from one room to another once he comes back under the player's control he's still running. I actually really like that one, since I've always been fond of the dash option and this game doesn't offer it. 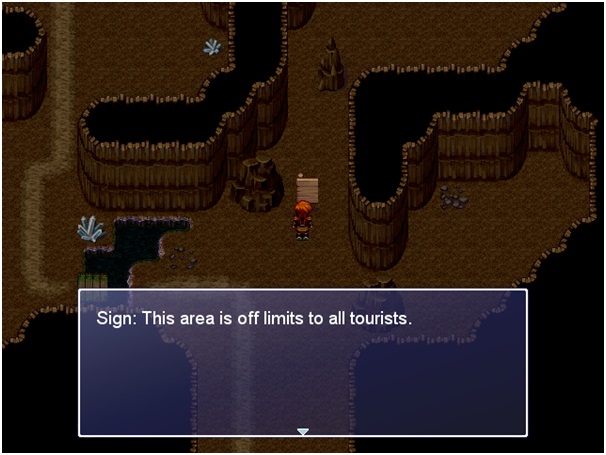 So it's time to rummage through the new town, and here's a hint, check every fireplace you see, you'll be surprised what they can hide as well as bookshelves as certain tomes will teach you how to harvest the healing and mana replenishing plants that grow wild around the towns and dungeons. This little harvesting addition can save you quite a bit when it comes to filling the inventory, so checking out suspicious and oddly shaped vegetation is a good idea. Then it's off to follow the voice in Sirria's head and the seductive lure of the shadows on to dangerous paths, or at least that's the impression the game developer is attempting to convey, and it's not badly handled. It's a little heavy handed in some attempts, but mostly it's done in a way that isn't overt, and allows the player to feel like they are choosing the path rather than being dragged down it by the game maker's vision.

I should cover the basics here, battles, graphics and with the exception of the title theme and one other used later in the game music, are all default. Front view turn based for the battles, with no additional extras in terms of overdrive or break abilities or monster HP indicators or indeed anything. It's a straight out of the box system, right down to the default battlers. The combats are all random, and I'm pretty sure like the rest of the systems in the game is set to the default 30 steps, which is as always a little too frequent, but then again the EXP and gold is relatively low so a plethora of easy kills whilst boring do enable you to build up the reserves you need in both gold and levels. 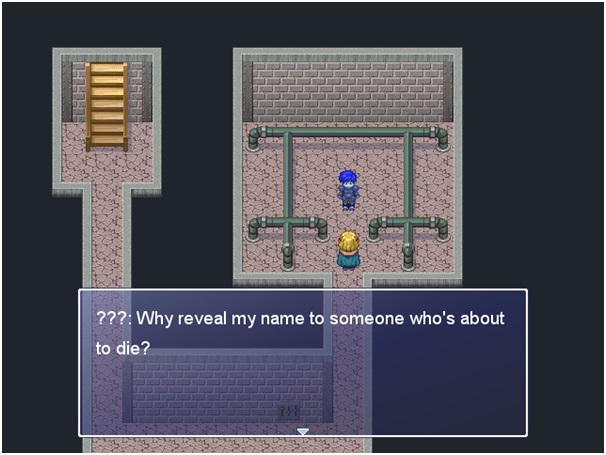 One of the nice little touches in the game is the transformation of Sirria into Necros, as the power of the Sword of Shadows grows to swallow and contain the darkness then Necros becomes more active and powerful, his abilities are the reverse of Sirria's and allow a bit of customisation when it comes to battling certain creatures or facing different scenarios. Whilst he only replaces Sirria in the party it's almost like having an extra party member without needing to swap anyone out, though the fact that the levels don't increase simultaneously for the joint character and that the armour being worn by the shared body doesn't carry over is a bit of an omission and mean you do need to grind a little as you move between the two.

I must admit I do have a preference for Necros over Sirria, but then the dark, complex and twisted characters are almost always the most interesting. Unfortunately just as Necro's story begins to unfold the demo comes to an end, and as previously stated given the 5 years since the last time the developer updated this game I don't think I'm ever going to find out what happens, which is a shame. As even with the spelling and grammar errors and the somewhat clichéd premise, the characterisation was handled well, the exposition gradual and appropriately delivered, and the mystery interesting enough for me to want to find out what happened next.

But as an old poet once said, we can't always get what we want.