Come out and play.

When we were children, and even as adults, most of us had a recurring thought that our toys came to life when we weren't around to see them and lived a life completely separate to our own. It's the premise behind enduring tales like Winnie the Pooh and Raggedy Ann and more modern renditions like the Toy Story franchise. In Living Playground that sentience has been extended to encompass playground equipment. More specifically a set of monkey bars, a slide and a swing that come to life as the apparently human siblings Octavio, Tony, and Pablo. How this is accomplished is never revealed, perhaps the residual magic of children's imagination has built up over the years to enable the transformation, perhaps the playground is built on a confluence of ley lines, perhaps they're a failed and abandoned alien experiment, or the product of an enchanter's incantation gone awry. The reasoning is irrelevant, their reality is not. So our story begins when all the children have gone, ensconced behind the doors of their homes or tucked into their beds, and the three siblings awake to begin a hunt for the world's best snails. 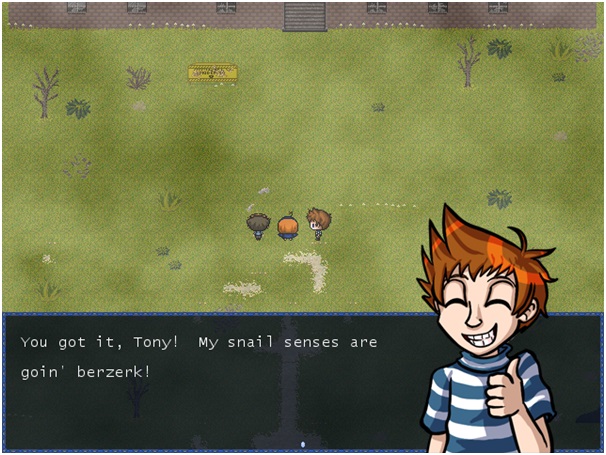 Their search takes them to an abandoned factory near their playground home and after scaring themselves in the fashion of all small children everywhere they prepare to venture inside on their hunt. However before they can do so, a strange shadowy figure leaps out and grabs Tony. This game is slated as being horror, but as outlined in the readme file from the developer whilst it does have horror elements such as the occasional jump scare and a couple of chase scenes as well as the obligatory blood on the walls, it's more about exploration and puzzle solving that just happens to take place in a somewhat creepy setting. Though why blood on the walls would be terrifying to three children who are essential made of metal and plastic in their true forms is a little confusing.

The art in the game is almost exclusively custom work, from recoloured and edited tile sets to gorgeous sprites, in both humanoid and playground form and emotive busts. The mapping isn't anything special though it's functional, but it does suffer a little from large empty spaces. Most notably in places like the locker room and library. The music is sourced to a large extent from Kevin MacLeod, including the charming and aptly named ' Simple Music to Frighten Children By', all of it combines to create a lovely if indeed creepy atmosphere. There is however an odd musical glitch in that the music stops and starts as you travel, not playing as a constant background.

So Tony soon finds herself alone, I'm assuming Tony is short for Antonio to go with Pablo and Octavio her two brothers (though traditionally that's spelt with an 'i'), and having to puzzle her way deeper into the abandoned complex in search of her siblings, not to mention a way out. The puzzles that make up the bulk of the game play aren't particularly difficult or onerous. Most fall into the category of find and use items in order to proceed and there is a limited amount of backtracking involved which makes for a pleasant experience. Most of the puzzles are quite original and some require you to use every item and ability at your disposal in order to solve them, even ones that would not naturally occur to you. So they do offer somewhat of a challenge in mental, though happily not physical, dexterity. If however you do get into some difficulty the developer has included a minimal walkthrough in the game file. However that does not include an optional extra in the game, which you will have to search to find. 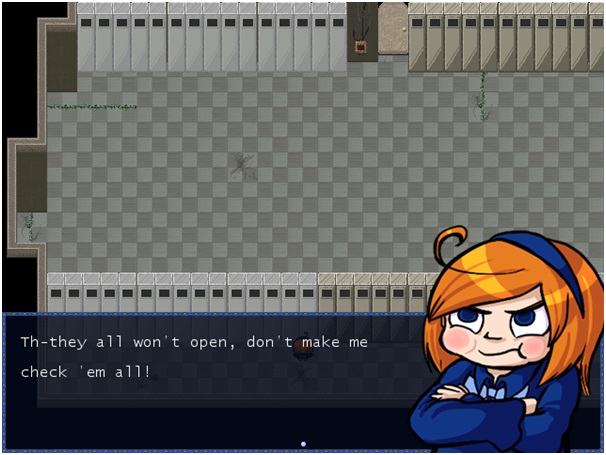 Sorry Tony, that's exactly what I'm going to do.

Whilst there are no traditional battles in the game, there are enemies that will damage you if you get too close. Most of these are in the form of patrolling teddy bears who will scratch you with their not inconsiderable claws. They do follow poor Tony as she makes her way around, but they aren't fast and are easily dodged or manoeuvred into dead ends. Saving is unavailable in the first part of the game until you manage to repair a raggedy velveteen rabbit, who will then act as your save point mechanism, so it's a good idea to solve that puzzle before you venture too deep into the structure in search of answers, and possible causalities if you're not careful.

Along the way you'll run across storybook pages, outlining the tale of the witch that Pablo tried to scare his siblings with at the beginning of the game. There are 12 pages in total, two per floor, most are easy to spot but a few require the use of an item or mechanism to make visible. It's a good idea to find them all before proceeding to a new level as some floors become inaccessible to you once you've moved on and you won't get the opportunity to revisit them to collect anything you've missed. In that vein make sure you have found the lighter on level one before you advance, if you don't when you get to the chase scene on level two you'll hit a game over very quickly.

Whilst searching level two, Tony runs across Octavio and the two reunite, and decide that they are not being chased by some kind of scary monster, but rival snail collectors intent on sabotaging their plans to be the best snail hunters on Earth. The characterisation of these children is wonderful, displaying both vulnerability and strength and the imagination that is so vital to their continued health. That's not to say that they are in any less danger than they were before, but they have found a typically childlike way of coping with the stressors they are currently enduring. 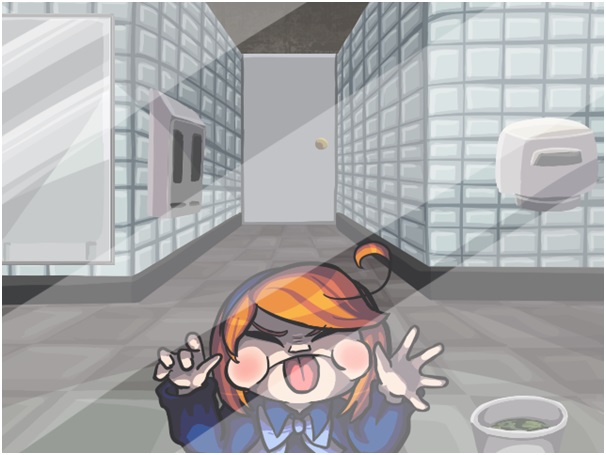 Seriously this game is worth playing just for the bathroom scenes.

So after an introduction of Octavio to the velveteen save rabbit it's off to tackle the puzzles of the second floor including that potentially lethal chase sequence and then on to the third and it's collection of fairy dolls caught in hazardous situations. Pablo rejoins the party at this point, though not without some reservation as he appears to believe he could do just as well on his own as he can with the aid of his elder sister and brother. The ambitious charming rebel of youngest child syndrome in all its misguided glory, though to be fair he may be right as his viewpoints do tend to get ignored by his older siblings as they travel onwards. After feeding, clothing and revitalising the poor lost fairies, and an educational astronomy lesson thrown in for good measure, it's off to the more dangerous floors in this, now established, toy factory.

It does strike me as a little odd that a place that has been abandoned as long as this one appears to be, and that has become dilapidated enough to have great gaping holes in the floor that could send you crashing down to the floor or floors below and has doors that have been rusted shut due to years of neglect, still seems to have completely working and deadly traps in place. Though I imagine that can be attributed to the nature of the mysterious curse which has been hinted at via the storybook pages and the words of the rabbit and fairies. 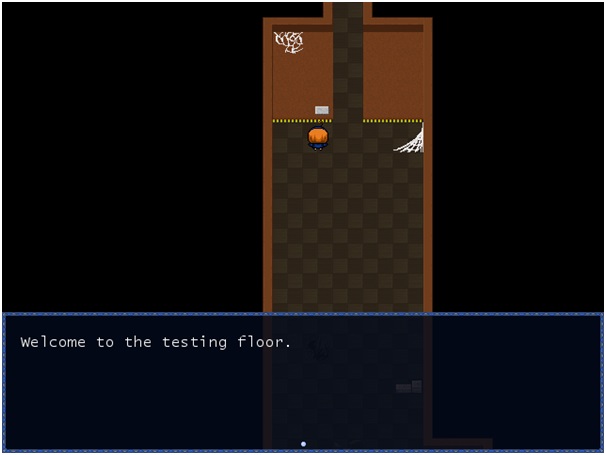 Yeah, that's not ominous at all.

So onwards through the fourth, fifth and sixth floors as the story of what happened in this accursed place unfolds via story snippets and conversations with those brave dolls who have risked the displeasure of the monster that stalks these halls to aid you. Each floor contains a different type of puzzle than the ones that came before, and all of them are fun to work through, though there are a couple more of the obligatory chase sequences where running and dodging is really all you are required to do.

Eventually you'll get to the end of the tale and the number of storybook pages you have managed to garner will affect the endings that you see. If you haven't got them all you'll get the 'Punishment' ending, if you have got them all but fail in your responsibility to one of your siblings, you'll receive 'Bad Mother', and if you manage to avoid those but get caught in the final chase sequence you'll be greeted with 'Mother's Little Monster's'. Make it past all the obstacles and you'll be able to end the curse and ensure that no-one else ever gets caught in it again. More importantly though, you'll be able to resume your search for snails and be in the running for that Greatest Snail Catcher™ title you've worked so hard to achieve.

Living Playground is a delightful if somewhat peculiar tale, and whilst the premise of animated childish things isn't new, the details of this particular transformative choice is, or at least is to this player. There were still questions left unanswered when the tale was told, but that is not necessarily a negative thing as little is ever wrapt up neatly when all is said and done. If you like puzzles and a charming if oddball tale and are willing to suspend disbelief then you'll probably enjoy your journey with these three eccentric anthropomorphic playground amusements.