The Legend of Zelda: Forgotten Gates 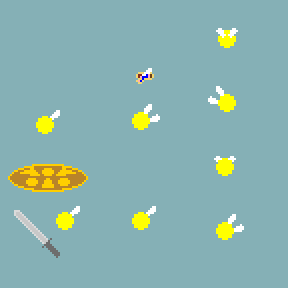 Navarre is another legacy character who won't be in the story (at least as a main protagonist) and may not show up in the final game period. He's a fairy who decided to become a knight, and we're not talking a knight who handles typical fairy-sized threats like vicious rodents and amphibians -- no, he's intent on fighting moblins and lizalfos with the rest of the heroes of Hyrule. How can he accomplish this? By casting a magic spell called Helping Hand which gives him temporary telekinetic control over a human-sized weapon. He became a squire for Lalaith, the Zora knight I showcased a few months ago, and she carries a longsword around for him in between battles.

In Forgotten Gates, despite Navarre's determination to be a knight, he's really of more use to the party for his magic. In keeping with the above description, he has to cast Helping Hand in order to use his weapon for a few turns, and even then he's far from the strongest attacker. Being a fairy, Navarre naturally has plenty of healing magic ability, although his most powerful spell, which does a full restore on the whole party, comes at the price of putting him in KO status. His element is Light, making him strong against Water and Shadow, but weak against Forest and Spirit.

Navarre's special ability is Rejuvenate, which restores half of Navarre's maximum MP. If I do include Navarre in the game, I'll probably have to rethink this. e.ea A healing-centric character who can draw on unlimited MP? That's practically a win button in any situation with a reasonable expectation of surviving a few rounds. It might work okay if Navarre himself is extremely vulnerable, say by having so little HP that even low-level mooks can take him out with a couple hits -- which would make sense for such a tiny being. He could also have a very high evasion rate to give him a little survivability, turning him into a valuable but unreliable heal source. Another possibility would be to give Navarre very little maximum MP, which would again sort of make sense -- even as an innately magical being, he's casting effects on a huge scale compared to himself, so it would probably be pretty draining for him. He'd have to use Rejuvenate a lot more often to keep up that way. However you slice it, this would be a very gimmicky fighter with the potential to throw off the game balance.