The moon isn't made of cheese.

Oceanus Selene is a game peppered with ancient Greek myths, or at least references to them. The title is composed of the names of two of the mythical Titans, as is the name of the main protagonist, Rhea, though rather than being a Titaness, she's a fairy, quite a reduction in size, though not in ambition. Rhea is a chef, and has plans to be the best in the entire Sunset Isle where she makes her home. Sunset Isle itself is also a reference depending on your translation of Hesiod.

So Rhea the fairy begins the game in the forest atop Snowzy Peak where she is out hunting for vital ingredients in order to make a batch of delicious Snow Cakes. 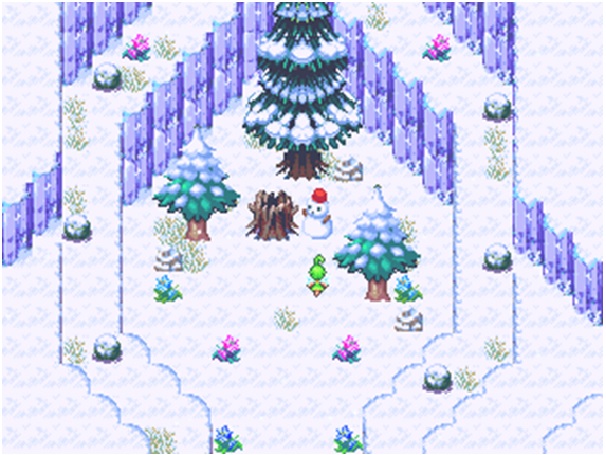 Even back then, fezzes were cool.

Given the period in which it was made the fact the first challenge is a glorified fetch quest isn't unexpected, but it's portrayed pretty well, and is actually a reasonable premise, in that something that is slow moving is hardly going to be able to chase after something fast to get back something that has gone missing. I do wish however that the developer had chosen to use more than one type of on screen sprite to represent things you can interact with because you don't know what is supposed to be a progression event or what leads to a combat that Rhea isn't very well placed to engage in. Especially as save is disabled so any mistake of that nature in this early section of the game means you have to start from scratch.

Still once you manage to find all of the Frosty Oak's missing medallions and gathered the other ingredients its time to head back to the village and a save option Rhea's kitchen to make those cakes. Along the way you run across the first of your recruitable party members, a young human girl called Amelia who is being harassed by a Hazel Munchkin, after defeating it and garnering the last of the ingredients you need you and your new healer friend head home for some yummy Snow Cakes. Well actually they are pretty awful. Whilst Rhea's ambition may be titanic in size, her skill is not, but never fear, young Amelia just happens to have an uncle who has his own restaurant in a nearby town and he's got 25 years experience, Rhea can apprentice under him to hone her skill.

So after a quick trip to the local provisions shop for some much needed equipment it's on to the town of Lamharn and dinner at the Dunkin Dog. However before then we run across the world map and it's a little bit interesting. You don't travel across it by sprite but by pointer, using the arrow keys to travel to glowing sparkles which indicate areas you can visit, reaching those areas brings up a quick snapshot of the type of encounters, both of the monster and NPC variety and the level of difficulty you can expect if you choose to enter. It's quite innovative for a RT2K game, and I wouldn't mind seeing it in more modern versions of the engine.

For all that that is a nice graphical as well as mechanical touch there are still some problems in that area, passage errors, unclear transition points and the occasional mapping mismatch, but there are easy enough to work around once you spot them, and in some instances they are unintentionally funny. 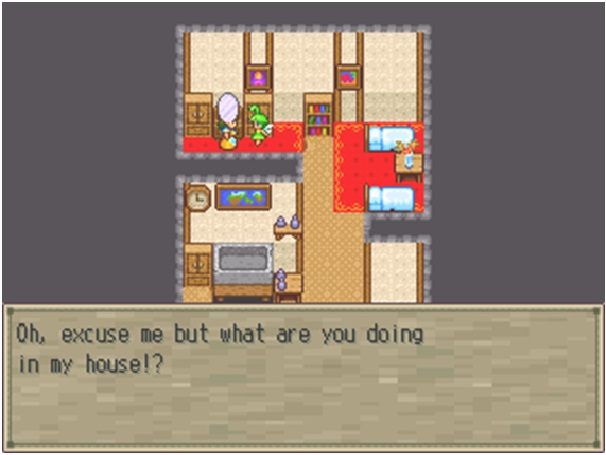 Nicking your stuff half-headed lady. That's what you get for bad interior design.

So after reaching Lamharn Town you find that rather than being welcome into the arms of Amelia's uncle as a new Michelin star in the making, the celebrated chef has been kidnapped and taken to the forest next door, determined not to lose her opportunity to extend her range, Rhea and Amelia brave the terrors of the forests in search of both her probable mentor and his assistant, Boris, who also went in search of him. Finding Boris doesn't prove too difficult as he is hiding out in the forest himself, the tales of his bravery being little more than a front, finding Ron however proves impossible, for the simple reason that the developer stopped making the game at this point, so you are left to wander aimlessly around the Lamharn forest until you realise there is no way to proceed.

It's obvious that this game was cut down from its intended length and content as there are a number of occasions where clues are left for you that don't lead anywhere, like the fairy in the original village which hints that a secret stash will be available if you come back at night, but when you do the sprites don't interact with her and the hidden area is inaccessible or the woman in the outfitters in Lamharn town who asks for a snow sugar but when you offer to help gives no response. It would have been better for the game if the developer had simply removed those triggers from the game because whilst not knowing about optional content isn't great it's better than knowing it was meant to be there and not being able to access it.

However given the way the game 'ends' it's pretty obvious that soft of polish was never going to be applied to this game. Even a simple comment from Boris when you find him stating that Ron is just a little further ahead but that they should rest before facing the bandits in their lair and then have a game end message come up would have been frustrating but at least it would have been an ending. As it was I had to open the game in the editor (hey it's RT2K, everyone has a copy) to find out there was no way forward and the game just peters out at that point.

It's pretty disappointing and whilst the developer does make a point on the gamepage about how this game was thought lost and this was a 2-3 hour quest rather than the original lengthy game, it is not complete in any sense and doesn't last more than an hour and a half at the most. Add to that tally errors with found items not showing up in the inventory, armour types having no discernible advantage over each other and a plethora of spelling and grammar errors and what started out with a bit of promise plummets like Icarus at the end.

Also, there was no cheese.

Close
08/13/2015 03:08 AM
Cheers for taking the time to write a review! You've made me want to go back and finish this game and polish it up. Tbh, I've heavily neglected this game over my other ones (as well as real life getting in the way) so maybe it will be complete sometime early next year.
nhubi