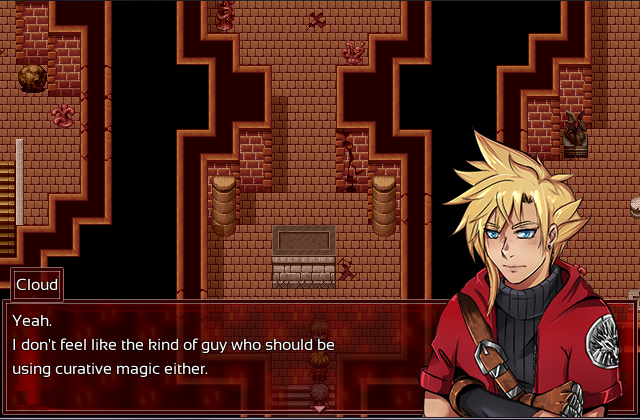 Close
03/17/2015 03:35 PM
I'll probably make a blogpost about it, but I'll touch on it briefly here since I mentioned it in the tagline and I don't think I've been entirely transparent with the fact.

Cloud and Squall, as they are here-- aka, coming through the Feymarch, aware of factory resetting-- remember every single one of their Square Enix compliant appearances, up to certain instances of their own canon.

Cloud comes through from a point after Advent Children, so he remembers his whole FF7 compliant life, but does not know about Dirge of Cerberus.

This does create certain meta holes where Square Enix has changed canon, especially for Cloud, but to Cloud (and to Squall), who both have memory issues, it's not something they take much notice of.

This is why Cloud & Squall know each other so well. They have been on other adventures aside from Square Enix canon, which will be touched on, but so long as they come through the Feymarch and re-enable their "full" memories, they can do things outside of their own canon.

They have met each other's groups, for example, but cannot remember such unless they pass through here.

Hope does have other iterations (primarily Theatrhythm), but because of how Squall pulls him through, he doesn't have those memories. He's also not classified as someone who appears in multiple instances.

Most FF protagonists are thanks to Dissidia, but there are different levels of it. Thanks to Kingdom Hearts AND Dissidia, Cloud and Squall are pretty high in the rankings.
Pages: 1