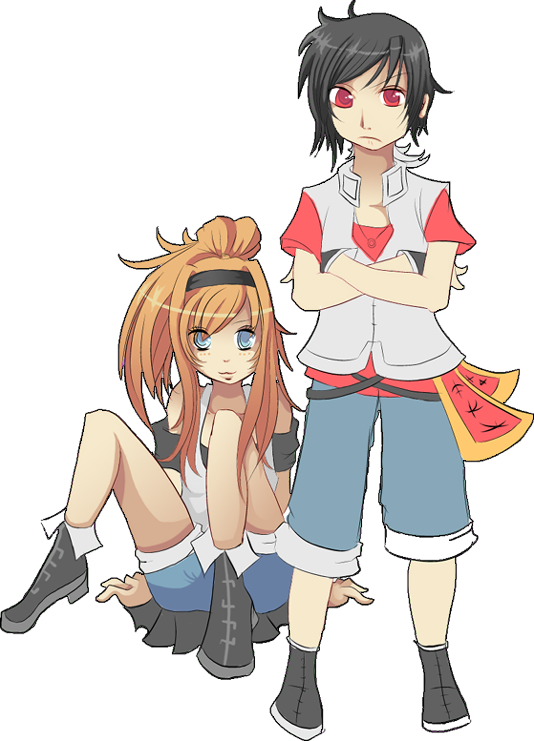 The game have been cancelled because RPG Maker is not enough powerful to do what I exactly want to. However, the project is still alive in 3D, with the same main story.

Wano & Yaxto is a full custom game, only a few musics aren't.

The story is about two ten-year-old kids, Kyomaru and Midori. In this world, there are many places where time is frozen in place, and everybody has black hair, with few exceptions. These exceptions are called "Kotonaru". The time-freezes aren't safe for normal people, but, for Kotonarus, they are able to not only survive, but gain access certain powers that only exist when they are in close proximity to these disturbances.

Hair color : black and white
Power : time
Battle style : fist strength
Description :
Kyomaru is really lazy, and quick to give in to the whims of others. He's brave for sure; he wouldn't hesitate to protect himself against any foe. However, he just can't seem to leave Midori alone.

Hair color : red
Power : fire
Battle style : blade master
Description :
Midori is naive and authoritarian : if she wants something, she'll get it. Knowing no fear, she uses a katana to protect herself. She has mastered many weapons, such as spears, axes and daggers.

Hair color : purple
Power : poison
Battle style : none, making potions
Description :
Romada is a young alchemist who has been studying science since her childhood. She has beauty to go with her brains, but, her personality is quite crude. Often compared to a demon, many stories of treasonous behavior surround her person.

That's a classic RPG with a side view ; you can choose the order of your characters' attacks (there is not speed involvement), and you can choose between several basic commands.

Here is an extract of the battle tutorial (in french again) :

You have to play with the super effective skills in order to gain PB which enable you to cast super skills ! You can figure out the foe's type just by looking at it's hair.

You can improve your skills by using them several time, or by drinking pink potions. A skill level up improve its damages with 10 levels max for a skill.

The battle don't give you any money, you just get ingredients to make some potions, and you can discover new recipes on the road ! The character who enables you to make potions is Romada thanks to her super staff. You just have to select "alchemy" in inventory menu.

This is your first recipe, you need it to make potions, and you recover it after drinking a potion. It's a special recipe in order to fill it with magic potions and keep their effects.


Thank you for reading !

As I said, Wano & Yaxto will be adapted in 3D. You can follow the project which is now here and called "Clockwork" !

I tried downloading this thing on 2 separate occasions and have failed both times. You know you can load the file on RMN if its under 400 MB? That might alleviate some issues.
Wano