Hello!
It's January and it is so cold that it's the right time to review Cold Rest, a game created by CrystalCreation using RPG Maker VX Ace.
First question, do you like sliding puzzles? Well, I do, they are my favourites together with the crate puzzles, really! And I hope that you will like them too, because this game is all about sliding puzzles and nothing else!

Oh yes!
Even if you can save anytime and anywhere, this game has absolutely no combat encounters, and the only way to die is to fall on some pits, but more about this later. For now, let's say that this game is all about sliding puzzles and nothing else, not even dialogues, ok to tell the truth there IS a (simple) story, but you will get it only after playing the game (see: ending cutscene!) that can be finished in a couple of hours, or maybe less, if you are good!
I won't spoil you what happens during the final part, anyway let's just say that you are a blue dressed pale guy with silver hair that has to go... somewhere, and this means traversing an snowy land with some icy sections.

And there is the gameplay: I guess you know what a sliding puzzle is. You have to press a direction key and your character will slide until he find an obstacle, then keep on doing this, using the various obstacles to reach the exit. Easy? Well in the beginning yes, but later things will become more and more complex!

So... what's complex in a sliding puzzle? In the beginning nothing much, but later you will need to use some pickaxe that can destroy ice blocks. The only problem is that those pickaxes are rather old and they are a one-time use item, so be ready to reset the level or reload if you use them badly, since you will have to restart. And that's not everything! In some parts you will notice some cracks on the ice: these are one-time tiles, because you break the ice and create a gap, falling on it will mean game over, so pay attention to these details (that the game will never explain so you have to observe, learn and adapt!). 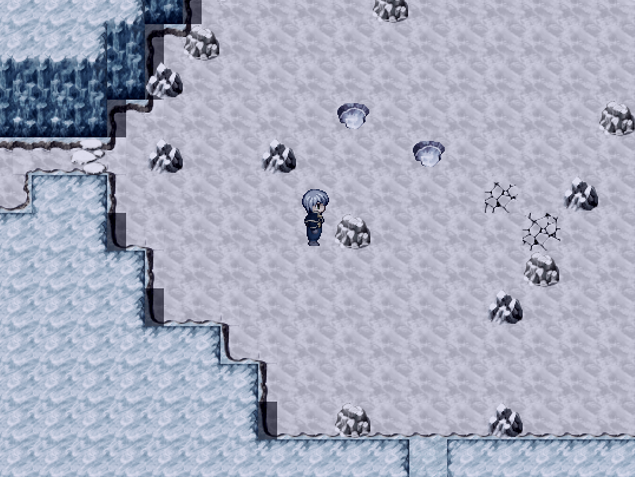 Do you see these holes on the ice? Falling there is the only way to get a game over, while sliding on the cracks on the right will create more holes!

For the rest the game is rathere minimalist, there isn't much to say about mapping and setting, it's just a snowy (mountainous?) territory and you will hear ambient sounds for the most part, except for the menu theme. There are just a couple of characters and no dialogues, so there's not much to criticize here too, anyway it's not a bad idea, it fits the puzzle genre, and in the end it just gives a background for this little adventure.

I found only ONE flaw: you have to keep pressed the directional key and not just press it, and maybe this can be a bit annoying sometimes, despite liking all the rest of the game, because yeah, it's simple but well done and without issues or bugs. Pity!

Final Verdict
Cold Rest is a short and simple puzzle game, whose plot can probably be guessed from some details (the menu screen, the protagonist, the title, etc). It's well done an I liked that except for two aspects that could have been better:
- the story (I mean more story and dialogues, even monologues, would have made it more interesting, not that the story is bad or it should be different!).
- the controls (you have to keep the keys pressed, unlike other ice sliding puzzles I played, and this makes feel the game a bit less immediate).
In any case, not bad, not bad at all!