Maybe?! Heck if I know how to actually format a good post but let’s try. As game development went on for almost four years, this is probably gonna be long… and also give away basically the whole game oops! I'll try to spoilertag the... spoilers...

Sometime around July 2014, a month after the initial release of my first game, my room was being remodeled and I was stuck with nothing for free time but a garbage laptop I could do anything on, an old flip phone, my sketchbook, and my 3DS. So beyond playing an obscene amount of Animal Crossing and Tomodachi Life, I at some point went “hey, what if I made a second game starring the kids.” So I started trying to plan it out! And it went...

...absolutely nowhere that I intended it to go!!! 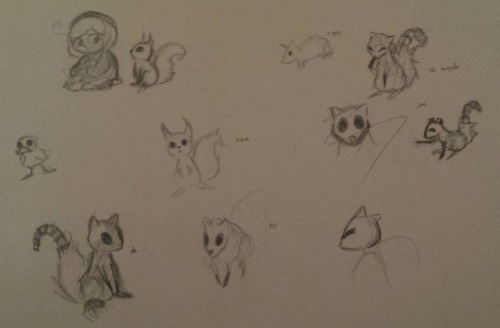 For instance, this is the very first page of sketches. This squirrel was supposed to be really important. It’s not. I don’t even KNOW what’s up with that duck.

A thing I like to think about before I set off making any of the story, assets, or scripts for my games tend to be themes and motifs. And I kept circling back to a very important, very personal “theme.” Particularly, I kept thinking that the RPG Maker fan crowd (at least on tumblr) tends to skew young and be in the teenage range and at ages 14-16, I could’ve had something in media to help me think "hey, maybe this ISN'T normal."

Of course, my entire thought process isn’t necessarily one of charity and selflessness. It was also a way of me expressing what I’d dealt with in ways I’ve only ever communicated with my friends who were also victims of the same circumstances, the closest I would let myself come to personal stories and retellings with a cover of plastic children and wild adventures. It was also in some ways a way of me verifying to myself that something ongoing was, in fact, bananas and should not have been happening, but that might be another story for another time.

As you can probably guess, Haze and Seal came into the picture since I needed to make two characters who would have this struggle. A lot of decisions came about because of my personal experience. They’re 15/16 because I was at the time of the incidents that primarily inspired me to make this game. They’re both nonbinary because I am. They love anime because I did (and do…?!) One of their friends is even directly modeled off how one of my friends looked in high school. To that degree, I guess someone, somewhere can call them self inserts. But they’re also not, since I didn’t want to just do a personal retelling with fictional characters. I’d just write a memoir or something at that point.

Haze’s design came first, and then Seal’s was sort of made as a foil to them. Haze’s “colors” are pink, black, grey, and red. Seal’s are teal and light purple… and also black. Haze had a rabbit motif (which got toned down as I went on), Seal had an owl motif (which is now just a single mention in their list of likes…), etc. 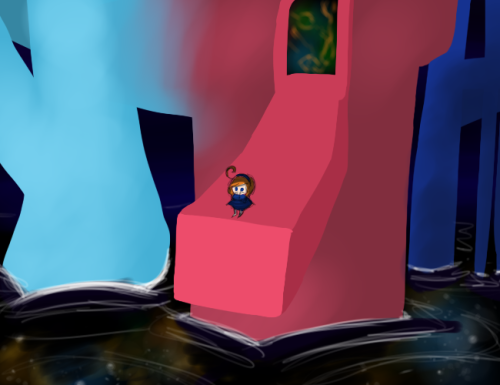 Though in the beginning, the story was entirely different. Initially, everything took place in the neon-ish areas with black sky and reflective, celestial water (that I, very eloquently, call “spacewater”). The idea was that Haze and Seal were beings from another dimension and that their “fighting” was causing a rip in the universe that the kids stumbled into and therefore got wrapped up in this mess. I had an entire script written and started making assets and when I went to sum up the game’s plot in a neat paragraph, I realized... I hated it!!!

So I chucked all I had done by that point writing-wise and started again. In fact, I rewrote a lot.

Show
After the first it was mostly small tweaks and adjustments, but the biggest ones (and the ones that still present a challenge to me!) usually involved trying to make Seal feel like a believable character. I had shown an early draft to someone who said that Seal felt too much like trying to get back at someone, so I scrapped a ton of their lines and tried again. I still worry whether or not they come across too Strawman-y, but I’ve done the best I can and whatever criticism people have can apply to my next writing attempts. It’s very hard to separate yourself from subject matter you feel really personally attached to. I don’t want to write them in a way that you immediately hate them, or hate me for writing such a blatant “villain” character, but in a way that you can formulate your own thoughts. That said, though, I am violently allergic to people who call Seal a “tsundere,” even in jest. So I guess I want people to have their own thoughts as long as it’s not that specific one…! (;;;;)


You may be thinking “heck, this is a lot of paragraphs in and you haven’t even brought up gameplay thoughts” and yes... that’s very true. Shamefully, for a game where I thought “I should definitely, absolutely focus more on making it a Fun Game than a walking visual novel” I might’ve actually dropped the ball in that area. I’d like to think I was more adventurous than I had been with my first game. Some parts do kind of fall into the “walk to the next cutscene, find a key to unlock the next cutscene” pit, but I did put effort into figuring out what I could do with RMXP. In the final product, though they’re very simple, I’m most proud of the chalkboard puzzle and the paint sorting puzzle.

Even if, y’know… I somehow neglected to include the letter “k”

Speaking of, I’m not sure if this is a general RPG Maker thing, a “man I hate RMXP” thing, or a “meaka cannot gamemake” thing, but I had several event/puzzles just up and quit on me a few times. Like they would work fine for months and months, but one day I’d go to them and just nope, suddenly they’re not working, sorry. Copy+pasting the event to a new map wouldn’t work, so I’d have to manually redo the event. One of them was the chalkboard puzzle. The other was the sliding puzzle when Tony is by herself. Which I’m also aware slows the game down a ton, but I have legitimately no idea how to fix that... I tried and I could never get to to not lag like crazy.

Like I said, I started in July 2014. I’d shipped the game off to my beta testers in March 2018. A vast majority of that time was spent creating the visual assets since everything you see in the game is custom. All the sprites, all the tilesets, every little pixel of it. All me! Needless to say… it was very exhausting and very time consuming. I grossly underestimated how much time I thought it’d take. I never accounted for the very real possibility of burnout, which is incredibly silly considering I was making something entirely by myself that was also an occasionally difficult subject matter…! There were quite a few weeks where I touched nothing because I couldn’t bring myself to and even a few times where I just considered deleting everything and cancelling the project. I knew I’d be mad at myself if I quit, especially as I got later into production, so I just tried my best to make sure I didn’t turn it into a huge chore. Obviously, there were parts that were more tedious than others, but this game really is a very large labor of love that I put a lot of my heart into.

Part of that time is also a little bit of indecision. Did you know I went through 3 possible title screens? I sure did! I’ve also publicly posted about redoing both Haze and Seal’s bust sprites before. I almost redid all of the kids’, too, but I didn’t wanna get caught in the loop of remaking everything, so I opted to just leave them as they are. Most of them don’t bug me as much. M…most of them!

Show
I’m hopping back on the Story train since obviously that was my main focus, but the decision to have Seal sort of “reveal” their true nature (or at least have a jealousy-related anger burst) to Octavio as an animated cutscene was one I’d decided pretty early. Which is also why, unsurprisingly, I was debating getting voice actors for a hot minute. But I wouldn’t have used it anywhere else in the game, so I opted not to. I also wanted to keep the file size low, but that wound up not happening so much, h-haha… For someone who uses the only engine without native support for videos, I sure do like making animated cutscenes, huh. 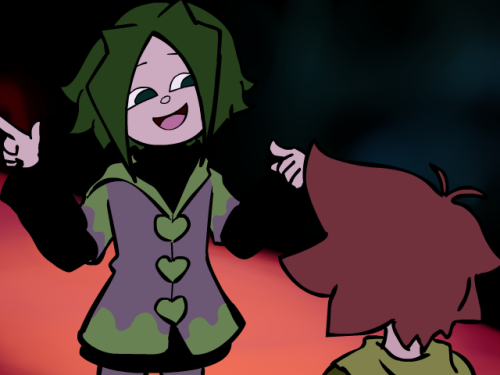 Anyway. This scene originally bridged Octavio’s section of the game to Pablo’s, which would’ve been (for some reason) in an abandoned hospital. But that didn’t pan out because it didn’t fit what I wanted the game to be and also by switching the order of the two, it builds up more tension(?) on the kind of character you expect Seal to be. I hope their very first “fuck off, maybe” took someone out there by surprise!

This also was the point when I decided I wanted to commission an original soundtrack, since nothing quite got across what I wanted at the time. Which is when I put out my silly ad post and somehow managed to get the amazing ProjectTrinity to compose for me…! I’m still amazed by the sheer quality of music he made for my little RPGMaker game.

Having the teen characters curse was also something I waffled on for a bit. Clearly, I dwell on the important things as a writer. I wanted it to contrast the cutesy, kidlike way the siblings talk and also the sort of squeaky-clean image the witches (particularly Seal) present to the kids by contrasting how they talk to each other, most importantly how Seal talks to Haze and their other friends. I did have the same issue with the Mother in my first game, but I opted to not have her curse at all either since she’s childish in her own way, too. But that’s not for THIS game’s postmortem, get outta here!!! 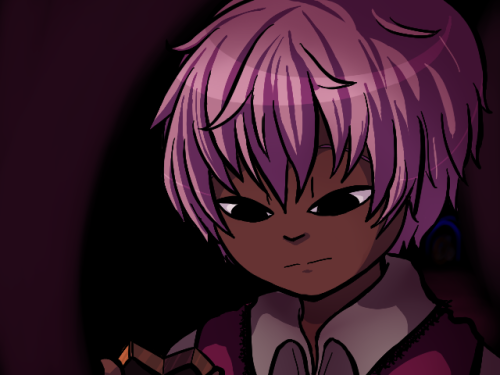 I also very much was set on a “battle” with words being the final event of the game. Though I had a hard time imagining what that would be initially, but eventually arrived at a sort of fake battle system that was introduced in the mine. The setting for this battle changed with time (everywhere from the park to the academy and in between) was considered…! The dirty secret is that while I did like the decision to make it take place in the voids between worlds, I also sort of did not want to draw the staircase in the witch academy. Originally, the kids would’ve also helped Haze “reach” Seal (who was putting actual obstacles in the way), but I guess in my own way, I wanted to give Haze the ability to confront Seal on their own, one-on-one. Or something like that…! I also didn’t want to add too much needless backtracking.


I’m… unsure what other point I really want to make, so I guess I’ll end this here unless anyone has anything in particular that interests them they’d want me to answer!

All in all, this game means a lot to me and took a chunk of my life to make and I really hope it’s able to reach at least one person who might need it, even if it’s only a little.

To all of you who gave it a try, thank you, truly, from the bottom of my heart.