The ties that bind.

I have to start this review with a disclaimer. There are spoilers below. If you don’t want to know the endgame in this little tale of despair you shouldn't read it, you should go and play it and find out for yourself. But if you still want to know my opinion anyway here's the spoiler-free potted version.

It was good, but dark. If you're ok with that you should play it. Though if you have a trigger in relation to
Show
child suicide
ignore the suggestion and play something else.

Anyone who proceeds from this point has no-one to blame but themselves. But just to ensure you don’t inadvertently read some text whilst you are scanning this safe section of the review, I'm going to add a screen-shot to create some spoiler space. 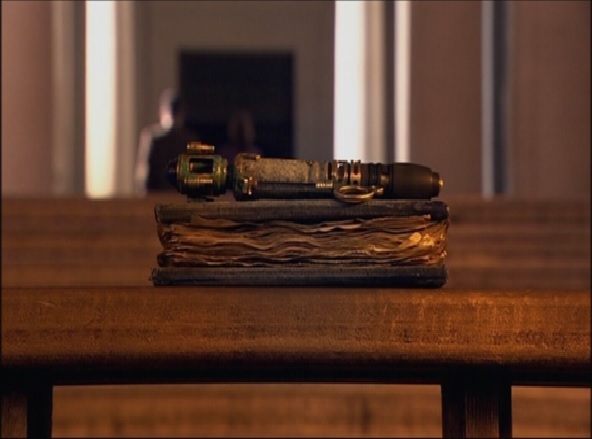 If you don’t know why that's a spoiler you need to watch better television programmes.


Blood Ties is The Sixth Sense of video games, something that makes you go 'oh, right, now I get it' followed pretty closely by 'how did I miss that?' though in my defence I will state for the record that I got the twist in the film, and indeed this game, before it was revealed. Not too much before, but before. Just like the film I went back and replayed the game to see the clues I missed and just like the movie, they were there, hiding in plain sight.

Blood Ties tells the story of Annie, a young girl, of course because the horror genre is never going to run out of unnerving little girls, who finds herself wandering alone through her house with no sign of her family, and her only comfort is her stuffed teddy bear. Who not only makes her feel safe, but also is the save game mechanism. 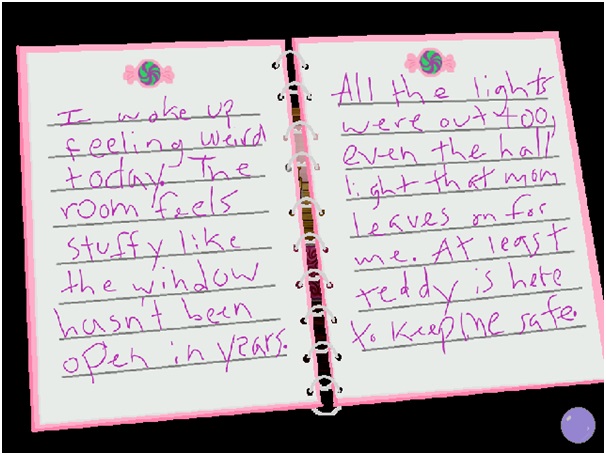 ..and saved, yes I seem to have a theme going.

The familiar territory of home soon becomes foreign as objects move and shift of their own accord, pictures change on the walls and once recognisable halls and rooms twist and change into something nightmarish. Annie's response to these changes is measured in her loss of sanity, shown as a small sphere in the lower right of the screen filled with a viscous purple liquid. As the level of the liquid drops so does Annie's grasp on her perceived reality. Revisiting her room and the comfort of Teddy will boost that level back to full, and calm her nerves for a while at least. You'll need to do that at least twice throughout the game if you don't want to trigger a game-over as Annie loses all hope and succumbs to the situation before she can accept it.

As she traverses her home she discovers no-one is where they should be, neither her parents nor her brother and along with the Freddy Kruger at nursery school theme music that plays as she wanders these events all chip away at her sanity. One of the very early clues as to Annie's non-living condition is made manifest in her brother Brian's room, but it is very subtle, and I missed it the first time around. Though the mirrors being crack'd from side to side each time Annie encounters one is less so.

Though if the developer is actually referencing the Lady of Shalott with that action, please let me know, that deserves a special mention.

As you progress you accumulate a wide assortment of items, from useful objects like keys to purely revelatory ones like the tea-set, and a few that serve a dual purpose like the stool. These objects can be found everywhere so it's in your interest to look into every cupboard and bookshelf, bang into walls and even investigate seemingly featureless areas. Though that exploratory drive has to be tempered by the fact that some of the areas with which she interacts will trigger a sanity drop. Some items will elicit an entry into the diary in which Annie obsessively writes her thoughts, others will further darken the atmosphere of the house. In the end however with the exception of the keys all of the items will give access to one of the three possible explanations for Annie's untimely death. 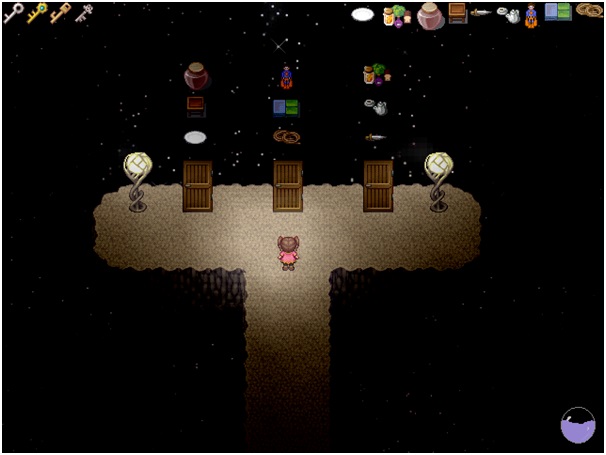 This kid has a surreal front yard.

Now of the three possible deaths that Annie experiences, the one in Brian's bedroom is the most rational, the kitchen one is plausible but unlikely and the one in Annie's bedroom makes no sense at all. I think it is done that way intentionally because the true ending of the game relies very heavily on a sense of guilt from Annie's twin brother Brian. The scenario in his room is the only one that has him being complicit in her death, accidental though it was, all the others have him playing a passive role. That death feels truer than the others, and did even without the epilogue sequence that entering all the explanatory rooms triggers.

If there is a suggestion I could make to the developer it's cut down on the end credit sequence. I know you want to acknowledge all the graphics and especially music you used to aid in creating the haunting atmosphere of this game, but having to sit through it multiple times in order to get to that final scene is painful. If you don't wish to remove it and I can understand why, allow the player to action key through it to at least speed it up, they are going to see it three times anyway.

The final sequence is tragic in a way that Annie's story was not. It's obvious even from the limited interaction this short game gives us with these characters that Annie was the dominant twin, the risk taker and charismatic leader whilst Brian was the dutiful but charmed follower. Their connection went beyond the physical as evidenced by the fact that the revelations of Annie's fate were from his POV, not hers even though these are supposed to be her memories of the event. It is that which makes Brian's choice both inevitable and in some way reasonable, for all that it is heartbreaking.

In the end I can't say that I enjoyed this game, given the subject matter, but I did enjoy the experience and I appreciated both the light touch and lasting repercussions that the developer highlighted in this short game. The short story, or in this case game, is a difficult one to tell as it must tell only what is most relevant, most crucial and most poignant about a character's interaction with time, place and situation. I look forward to seeing what other tales can be reaped from such fertile ground.

I'm afraid I must admit that I have never seen The Sixth Sense, so I cannot appreciate the parallels you have drawn between it and what I have created. I have, however, read The Lady of Shalott during my undergrad in college and it was part of many medieval and early English materials that I read during that time. The name didn't ring a bell right off the bat when I read it here and I had to Google it, but after reading a few lines it came flooding back to me. The mirrors shattering was indeed to be in reference to her non-living state and it would seem that this piece of literature might have subconsciously influenced my decision to include this, though I had not done so consciously.

Further, I would like to thank you for taking the time to write this review. It has given me some wonderful insight as to the touches I have included and how they have influenced my players. I did plan to make more horror games with the RPG engine, but work and school got in the way. I still have one in the works, but it has taken me some time to get what I have done. Some more time is needed before it will be out as well.
Pages: 1