More classic than a true classic!

Welcome to the review of Dule, a Rm2k3 game I never saw before, and I learned it was made by Roden in 2015 for the event "A Golden Week of RPG Maker 2003".
Cool premise, since this means that this is an old style game, made with Rtps and really classic, like the old game of the golden age of Rpgmaker 2003. I really like this kind of games, no wait, I love them!

But let's go starting with the story: we have a sorceress, Ceres, that hires two mercenaries, Stray and Vega, because she has to travel the lands and reach a tower.
Which is her mission? Well play the game and see, this is a short and linear adventure that took me about 35 minutes to complete, so it's pretty short (but this game was made in a limited time for the event, so it's understandable, also the plot was pretty simple!). 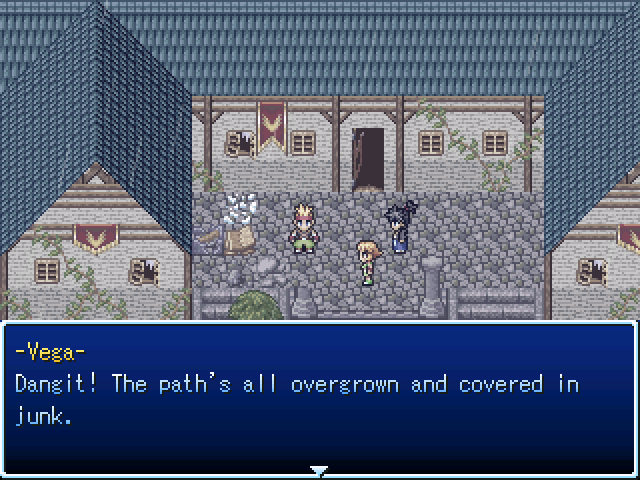 Now we have to run through a haunted dungeon! Even if probably crossing the fountain somehow would have be a quicker solution! Anyway the sprite of the door moving to the wind is very cool.

The game consists on three dungeons (with some stops/rests between them) and one boss fight, but it's all rather easy, no need to grind and you may also flee from some combat encounters if the random encounters (that are a bit frequent) starts to annoy you.
Combat is, as you can expect, classic! Characters have all a basic attack and some special elemental attacked that cost MP (mana points, magic points, whatever! You just need e̶t̶h̶e̶r̶ herbs to replenish these). Of course you also need potions and better weapons to have an easier time (even if the game is never difficult at all) and these are both found and bought. Uhm weapons are rather expensive, anyway yes, you also have the possibility upgrade armor, but that's rare, expensive and there is no need for that, also there are no slots for hats/gloves/boots/rings/accessories.

The three dungeons aren't bad: the first requires to search for keys, the second is a ruined villa that's pretty weird since it requires to go up and down through two levels (also enemies seems to be spectres/phantoms/ghosts that are immune to physical attacks)... last one is probably the most banal, anyway they are all linear and not too long. But I do not mind!

What instead I DO mind is the lack of difference between cast members: all three have almost the same skills, one can use fire, one can use ice, one can use both. Two of them can also heal, for the rest there is little difference, one is stronger and another weaker, one attacks with throuwing knives that hit every opponent, the others have single attacks. But that's all! And unfortunately due to the short time (available to make the game for the event I mean) there is almost no space for character development and dialogues. Really a pity!

For the rest I think there's not much to say: the game is short and uses RTPs, classical good old resources we already know, both for graphics and music. At least these are used well, I mean that maps aren't bad, I liked them, some are better than others but overall they are ok even if the get a bit boring towards the end. 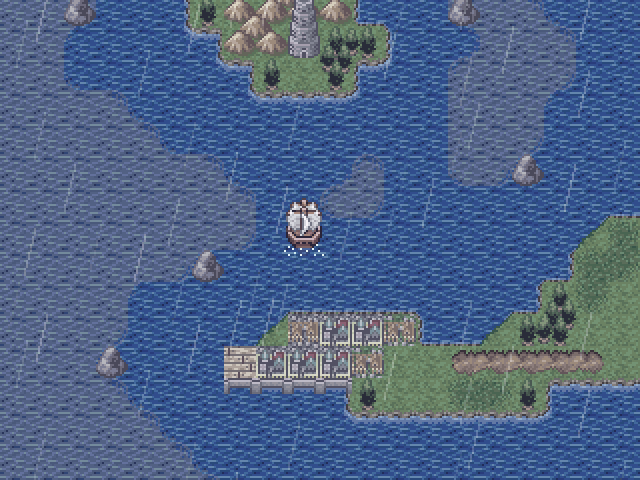 We're almost at the tower! Onwards to our destination to read the...


Final Verdict
I do not mind games that have no puzzles or diversions and present a classic old styled gameplay. Yeah, I also do not mind if the game is too easy, in fact better too easy than too hard! Unfortunately what I wanted is something that makes the game stand out, a feature, dialogues, characters, a captivating story... anything!
Unfortunately this is not the case of Dule, that is a decent game but a bit anonymous, unlike others I played (not just the old classics, but also more recent ones for eaxample from the events A Golden Week of RPG Maker 2003 and RMN 10th Anniversary Retro Game Jam, not to mention some I recently reviewed). I mean also the few cutscenes are a bit bland and nothing is memorable, including the abrupt ending, and it's a pity because there are also some clever ideas, like the camera showing all the path. But yes, for the rest there isn't much beyond the "adequate", combat, story and character are not that interesting. Dule is a... dull game! Not bad at all (I found no bugs, not even typos), but not memorable either.