Produced for the Golden Week of RM2K3 competition, which in turn was inspired by the release of the English version of the long pirated RM2K3, Starship TsukuruNova is unity's foray into the world of legal RM2K3, and there is nary a pirate in sight. Though there easily could have been, given the opening setting of sailing ships in space.

The premise is deceptively simple, a colony world's oxygen plant is breaking down due to unknown causes and the crew of the TsukuruNova is sent to investigate and repair the damage so that the colonists of Greenshell3 don’t die of asphyxiation. Your party of three intrepid adventurers include Maelym Terraero leader of the Hazardous Emergency Assault Recon Team (yes, she's the HEART), Jean-Luc Alysner your swordsman and healer, and LR-388 a combat robot. Though given the restriction to RTP only for the competition, your robot is more of a human simulacrum in Day-Glo yellow. 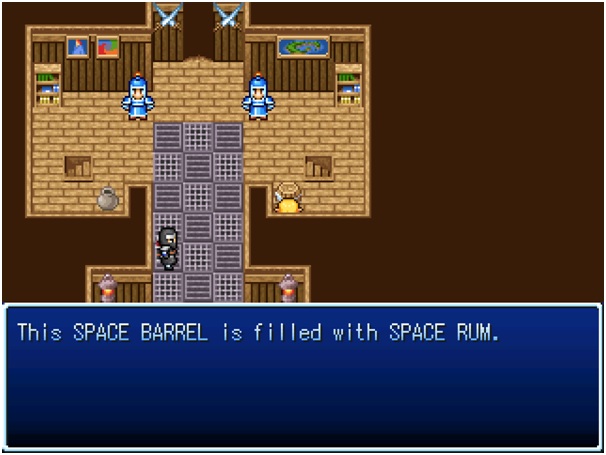 Ah, so there were pirates...SPACE Pirates!

Of course this being a unity game things start to go wrong almost from the get go and the mission runs into some alien interference and the crew are forced to crash-land the ship, luckily on the planet you were sent to help, which is serendipitous, but also now ties your fate to the colonists. If you can't restore the air producing plant you'll join them in suffocation.

So heading out we run across our first combat, with onscreen enemies which is always a plus, I have to be honest here, ATB is my least favourite of all the possible combat mechanisms, but given the rules of the competition I knew what I was getting into so putting aside my dislike for the style the combats are quite fun and at times challenging. There are some issues with the relative speed of the combatants and there were a few times when I found myself staring at the screen as nothing happened waiting for the bars to fill, but that's not a problem that applies only to this game, quite a few ATB based combats run across that issue. Still some tweaking could make it much less prevalent.

After dispatching a few slime skeletons on the road to the colony settlement we make our way to the Poobah of the town, no really that's what he is called, who kindly gives the team supplies and advice. In fact just about everyone in the town is helpful, from the shop assistant that slips you a few upgrades to the random nun who seems to be hinting at a sidequest (which unfortunately doesn't eventuate in the traditional sense). But it's in the little details that the evident polish shines through, the fact that the majority of the colonists have put themselves into extended hyper-sleep to conserve oxygen which explains both the paucity of the inhabitants and the curious chambers scattered around the town, with a guard protectively watching over them whilst they are helpless. The item response dialogues which are a mix of funny and informative, the items you can purchase made me smile, especially the M-Cross frame and Asimov Tank, and just the general feel of an established settlement facing a dire situation with a surprisingly realistic level of aplomb. One thing which does feel slightly out of place however is the music, it's a little too upbeat for a situation as life threatening as the one the colonists and now the team find themselves. 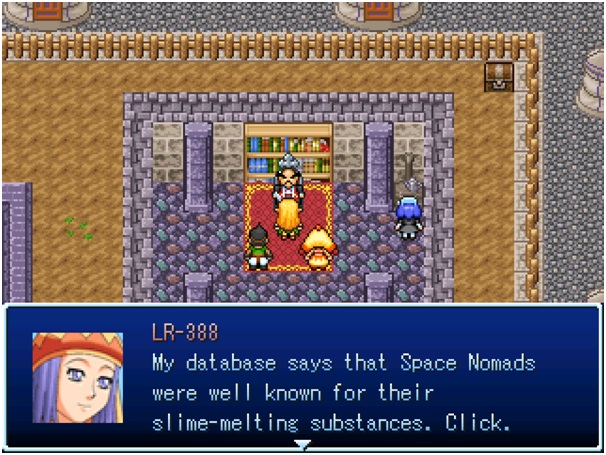 So with a metaphorical 'go get 'em tiger' and a handful of upgrades from the township you head out into the wilds to find the slime-shield destroying substance and try to discover just what it is that is going on and get a glimpse at the bigger picture. The rest of the game follows a pretty well established pattern, there is one optional dungeon included which really should be explored. The enemies aren't too onerous and the rewards are worth the time. When you do finally breach the slime shield and enter the atmosphere producing plant there is, or what I assume to be, an unintentionally funny moment. The music which once again feels a little too upbeat actually fits perfectly with the speeded up enemy sprites. I had to stop playing for a few minutes just to regain my composure because it looked for all the world as if I was going up against the zombie dance academy rather than a host of hostile aliens bent on destroying the fragile human/ Relfaeian settlement.

The late stages of the final dungeon can pose something of a challenge combat wise because the intensity and strength of the enemies does take a sharp upward curve but unity has allayed that with the inclusion of a couple of healing and merchant androids in a safe room that can be used as a grinding mechanism to get you up to a level capable of taking on the villain and his dastardly scheme, complete with nefarious plot and hammy overacting. 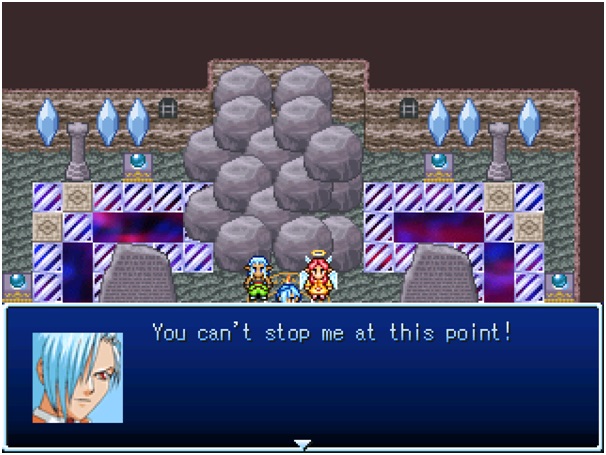 This guy never read the handbook.

You're going to need to be up in the 20's somewhere because like all good space operas it isn't over until the fat lady sings, or the Zyerbitian Princess comes out to play and even then it's a bit of a pyrrhic victory. Still our heroes will eventually win the day and achieve most of their objectives with a little bit of chewing scenery and robot romance thrown in on the side, but the work of HEART is never done, and our heroes will soon face another challenge.

Seriously unity if you make a sequel I'm playing it.

I felt like the music was one of the bigger struggles for me in the game, as I could never find stuff that felt both "sci-fi" yet also fit the tone I wanted, so there was a lot of compromise.

As for a sequel, if enough people want it, I may make one! It would certainly give me a chance to flesh out the characters a bit more.
Linkis


Get to work on your SPACE sequel :)
Red_Nova

Close
05/14/2015 11:51 PM
Hey unity I'm glad you enjoyed the read. Given the contest restrictions I imagine compromise was the word of the day. For me though a focus more on the feeling of threat rather than the sci-fi aspects would have been more immersive.

Still you can have free rein in that sequel you are now planning, no rules so the sky's the limit. xD
Pages: 1