A Traitor's Hold throws you into the game from the first moments. There is no exposition screen or info dump to ease you into the story thus far. Instead you start the game midway through a battle which is a little confronting especially as given this is RM2K3, the battles are all ATB so you better get your wits about you quick or you'll end up mincemeat before you've even begun. After what seems like a battle against overwhelming odds your solitary battler is joined by two other party members and quickly wipes the floor with the enemy and you get an introduction to your party. Tybalt the party leader and knight, Henriet your summoner, Skidds the smart mouth thief and Vinae the cause of all your problems, sorry that should be Priest. Except he isn't really. Vinae has some impressive sounding skills under his belt, the only problem is they all appear to be illusions, they sound good, but they apparently do nothing. Because of this your party of four is seriously lacking in the healing arts and therefore has had to beg, borrow or steal and then finally pawn almost everything they own in order to keep themselves and their useless party member alive on the road to confronting the Dark Lord in his lair and freeing the world from the threat of his tyranny. The upshot of this is, by the time they get there they are in no position to actually confront him and are forced to retreat and find some way to rebuild their offensive capabilities.

As a gimmick for having a party have little or no viable equipment it's a good one, and since this game doesn't have progression through levels only through application of equipment it also explains why not only are our erstwhile dark lord slayers underequipped they are also unskilled and unprepared. Personally I'm siding with Skidds at this juncture and thinking about offering Vinae a long walk off a short pier and though our hero knight Tybalt seems to have dialled the chivalrous control all the way up to stupid and will have none of it, Skidds can think, and act, for himself. 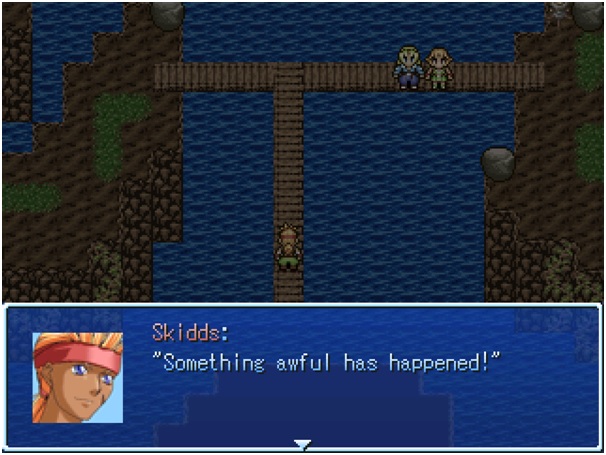 Well, no, not really.

So now that that particular problem has been dealt with in a somewhat amusing fashion, it's time to hunt for a new healer and it's off to side-quest land we go.

Now I'm a bit of a fan of the side quest, always have been, the ability to diverge a little from the main thrust of the story and explore other regions and dynamics between characters had always held an appeal, but given this game was an entry into Golden Week RM2K3 competition I honestly expected most of the side quests to fall into that lowest common denominator, the simple fetch quest. If only for the fact that time constraints would make that the most viable. In some ways that is what I got but there were also a few more interesting expeditions to go on and some quite funny moments between this gang of adventurers that kept the pace light but interesting and at times quite amusing. 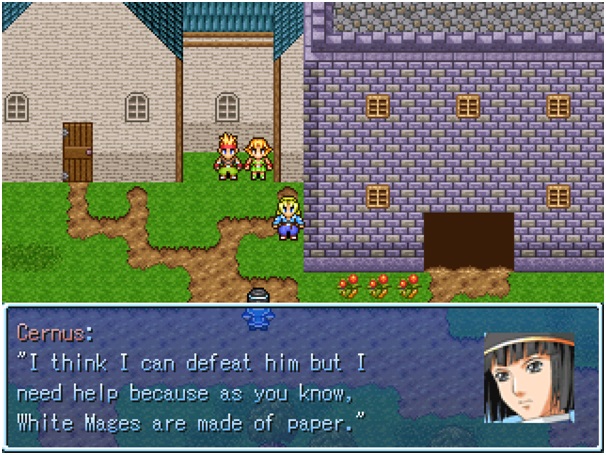 Good to know your limitations.

The language used in the game is well presented with only a few glaring misspellings and grammar errors, though the use of casual profanity seems a little forced and could easily have been omitted or toned down without sacrificing intent or vehemence. Though I do note with some small interest that swearing is used almost exclusively by one party member which does make it seem more of a personal characteristic than a lack of imagination.

So after we gain an actual healer, or as they are dubbed, White Mages, we get introduced to the 'you show me yours, I'll show you mine' skill learning system. For convenience sake, they're called Orbs. Basically as one of the party members points out they are all down on their luck, low on supplies and skills and severely underprepared for girding the dark lord in his lair, so they'd best go out there and build up some cash to get what they need, but along the way since they all have unique skills wouldn't it make sense to teach them to one another and therefore increase their effectiveness in battle and beyond. There is a gaping logic hole in that argument big enough to drive a B-double through, but this is a fantasy setting so some leeway is allowed and even expected. So each party member equips a magically appearing orb as an accessory and the experience gain they get through battles is applied to the orb, once they reach 1000 XP (or AP as it is termed) they learn a skill from the Orb and they can then swap it out with another until each of the companions has gained a new ability from each of the 7 available Orbs, one for each character class and three others discovered or stolen along the way. This ability gain helps explain the oddly deficient battle menus that you run across early in the game. The blank spaces are there to allow for when the characters learn new skills and therefore need to access different menu options. 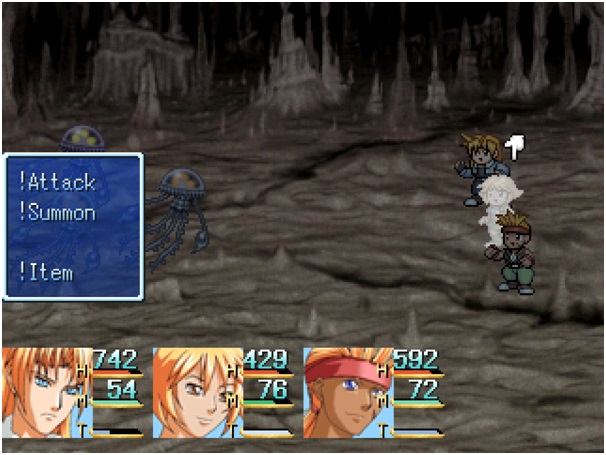 OK, I understand the blank spaces now, but what's with the leading exclamation point?

The fun part about this is that the skills they learn aren't identical; the original character class of each party member influences the skill they will learn from each orb. The system unfortunately is better thought out than it is implemented with quite a few of the skills not offering a lot in terms of differentiation or indeed effectiveness and most of the time you fall back on to a couple of default actions and simply use them each time. Still I do have to say I liked the change up from the traditional locked in skills for each character class, it's not original but it was a pleasant addition.

So after traipsing through a multitude of maps, there are 91 in the game folder, which is ridiculously large for a short contest game, and helping out all and sundry in their endeavours large and small the party is finally ready to go up against the dark lord on his dark throne. An odd design choice and one I wasn't enamoured with was the fact that the last series of enemies, the guardians in the tower and the Dark Lord himself didn't actually give you any XP. Since I'd maxed out all but one Orb for each of my party I was planning on using whatever I faced in the tower to get me my final series of skills, but that wasn't to be, so I ended the game with one set short which annoyed me a little. I mean the ultimate and penultimate foes should actually give you a sense of growth and accomplishment when you take them down.

The answer to a question that had been plaguing me a little throughout the game isn't given until the epilogue, and at that point the title of the game makes sense and a few odd instances fall into place. To say I was expecting what happened would be too much, but there was a distinct feeling that all was not as simple as it seemed. As to what that is, well I'll leave that for the game to tell you, but the upshot of the reveal does make you look at the way certain scenes played out in a different light.

In the end Traitor's Hold was an interesting tale, I think the dev tried to squeeze too much into a contest game and as such there were some moments that didn't hang together as well as it should, though that could be passed off as part and parcel of the framed tale by an unreliable narrator if the dev felt like being lazy. There were some uneven spots in regard to balance and some of the encounter rates in certain areas needs to be toned down significantly, not to mention that the Orb system whilst fun wasn't as smooth as it could have been, but for a game made in 9 days it was a fair effort and worth giving a few hours of your time to play. Close
05/25/2015 11:02 PM
Thank you very much for the well written review nhubi! I felt your overview on the story gives a highly accurate and representative description and your critiques and comments are very interesting and useful and will definitely be taken into account.

Amongst other things, it has made me wonder if the current ending might work better as a twist instead of the resolution.
nhubi

Close
05/27/2015 03:55 AM
Actually the ending is fine as it stands, like I said it made certain motivations clearer which is what you are looking for in that sort of epilogue. Honestly if you introduce it earlier I think it would detract from some of the fun of the game because you'll then be playing with prior knowledge. Not that I believe that would change the in game outcome, but it would change the player experience.
Pages: 1