1 reviews
Save to Dropbox
► Storyline

You will travel through different kinds of landscapes and smite your enemies with an easy custom battle-system. Loot them, solve side-quests, open new paths and riddle some riddles.

► But wait, there is more

Yes, there is! But this game works around "show, don't tell", so I won't spoil how the mechanics work. Would be pretty counter-productive (however, if you want to see more information, check out the screenshot descriptions).

Because this is a submission for the Golden Week of RPG Maker 2003 the ressources and possibilites are limited and so I can only use unedited RTP. And I really like that!

Hourray! GoldenGuard won the "Golden Week of RM2k3"-Contest \(°3°)/.
Now screw the rules because I have blond hair:
With version 1.1 I will start to convert this game to GoldenGuard:Go!, slowly but steady. And that includes changes that weren't possibly within the contest's rules, like graphical editing. However, I will also change the gameplay a little bit, expand the world with much more areas and change some mechanics.

This is the plan:

GoldenGuard is a full release and will be bugfixed if necessary. I can only update it within the contest's rules. The last release will be v 1.0.5.

With v 1.1 I start a transitional version (a new download) which will break the contest's rules. Basically it's GoldenGuard without any bigger new content, but still in better. This version will be updated from time to time.

GoldenGuard:Go! will also be a different download and released when it seems to be finished (version 2.0 of GoldenGuard). Of course there will be no demo.

A lot of time flew by since my last progress report. And in all honesty, I didn't work much on the completely new version of GoldenGuard. However, I found new motivation for my little golden gem. Especially because this game will still be a simple game with no dialoges or super complicated stuff. It's managable.

So, how's my current progress for GoldenGuard:GO! ?

I heard your complains and changed several core mechanics, added new mechanics and am still in progress of creating new upgrades. All maps/areas will be redesigned.
The following list will be updated from time to time. It lists every finished "feature" or big change. Please be aware that these changes will not occur in the basic downloadable game (GoldenGuard).

- Money you earn from enemies are now visible collectables

- Armour now protects your newest hearts instead of oldest

- Battle was a "hit & run"-mess. Now you can strafe (fix your face-direction) which makes battle much easier. This changed the way our heroine interacts with objects (because RPG Maker is a bitch) so I rewrote the basic interaction mechanic

- Moveable objects (like crates) can now be pushed AND pulled

Because english isn't my native language, GoldenGuard:GO! will also have very little spoken words. If any.

Calcification Bow. Freezes/Stuns your enemy for several seconds.
Bow must be charged and has a cooldown.

It can also interact with fire to hurt enemies...

~True
And finally, deal with the bigh threat.

Obtain new tools (like the Fairy Grapple) to clear your path

Stock up the merchant's shop and obtain new important items

Close
05/11/2015 11:35 AM
I like it so far after one playthrough, while it sadly lacks content which is understandable, I wonder how it is in comparison to other entries but also how it will do after there will be simply more. The gameplay is solid, all the designs could not be (much) better (well, I was a little annoyed that the top of a tower blocked by path below) and whatever can be said to be story is still neat despite being very simplistic (I think it was a good approach to make it then a little bit more funny and add some fine details to let it have still some splendid memorable character).

Speaking about bugs, I guess this here counts as one: (Just in case, it may be a spoiler, I honestly do not know but better safe than sorry)
Show 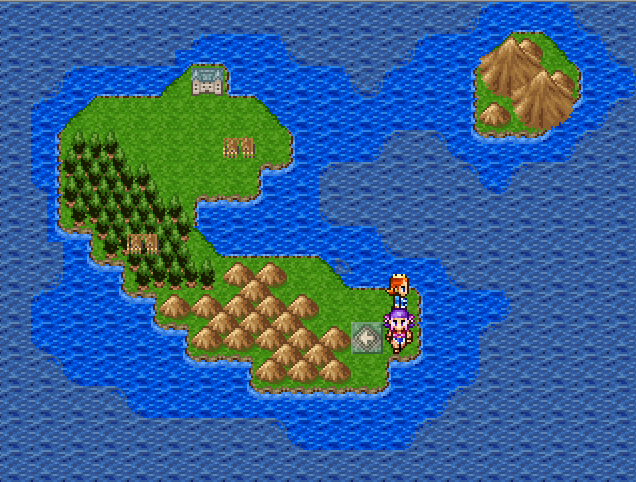 since I had to visit and exit the area before that one to be able to go further, as you can see, an arrow is missing. Specifically I unlocked that area before finishing the event which unlocks that path, wondering also a little why I can't do anything there, and so I did skip over the area after that certain event.
TrueMG author=SakuraKoi
Specifically I unlocked that area before finishing the event which unlocks that path, wondering also a little why I can't do anything there

Well, there isn't anything. There should be a small harbour but I hadn't enough time.

I will fix the "no arrow"-bug in the next update. Thanks for reporting!
EDIT: And I forgot to fix the bug. Good job, me!
EDIT2: Now fixed! Close
06/04/2015 09:35 PM
Congratulations on winning the contest :). After playing this game I can see why. It was really impressive what you managed to do in such a short space of time and with such limited resources.

The gameplay was surprisingly solid and the game had a lot of polish. I guess you had to cut a lot of content out due to time constraints but it's clear that this project has a lot of potential. I liked how the objects you found along the way opened up new paths/treasures in old areas.

I vaguely recall someone on the events page saying that it would be good if there was an Inn as recovering lost health is expensive through potions alone. That's really the only criticism I can think of. :)
TrueMG

author=Cernus
I vaguely recall someone on the events page saying that it would be good if there was an Inn as recovering lost health is expensive through potions alone. That's really the only criticism I can think of. :)

Yes, I can totally see this. In fact, one of my testers wanted an INN and I, in my all mighty stupidity, have chosen to ignore this point. Hourray :P

However, there could be an INN in a future update.
Also a gameplay-timer at the end of the game.
shayoko

Close
09/28/2015 05:17 PM
random
Show
that intro lol XD random prinapping then it comes back and takes out the other one just to troll XD


General <1H? (no time stamp. guessing)
Show
This was a ok game.nothing astounding.but it was pretty fun.
it took me a bit to realize that the things above there head was not decoration but a clue as to what they want.
the dragon while not difficult (and under powered. he does 2 damage instead of 3)
was a amusing troll in the plot XD.
which was interesting in the manner that there no words only expressions somehow conveyed thru 16 bit sprites jumping :D


Overall
its short and a pleasant playthru. i would recommend this to someone who is fine with a game that does not have any depth at all :3
Fisherson

Close
09/16/2016 06:29 AM
So I DLed this for fun I guess and wasn't expecting much....but man was I shocked!! =O Despite being very unexplanitory it's not totally mystifying, especially the simple but funny story XD, and is pretty easy to get into. That's a killer ABS you have there! Simple and easy to learn. Has allot of potential! I don't even like action RPGs much outside the Legend of Zelda classics, but I'd add this as as a second favorite. Tell me do you have plans to ever do another?
TrueMG

author=Fisherson
Tell me do you have plans to ever do another?

Hi! I'm working on a massive updated and expanded version of this game (GoldenGuard:GO) with better battle system, better upgrades and maps but with the same style like before.
EgyLynx
0