Made for the Golden Week of RM2K3 competition which celebrated the release of the official English version of RPG Maker 2003 after 10 years, R is a short piratical romp made with the non-pirated version of the engine. This intentional lampooning is a hallmark of the game itself shown in vivid detail before you even start by the name that the developer has chosen.

You play as Captain Longbeard who for reason that are never made clear crews his ship mostly with the dead; zombies, skeletons and later a mournful ghost are all members of his scurvy crew in what I can only assume is an homage to Davy Jones from the Pirates of the Caribbean franchise. Captain Longbeard and his first mate LongDonSilvr, the only other living member aboard ship, head out into the town of Portsea to gather supplies and find a shipwright to repair damage to their pirate vessel the Mad Daisy, sustained in what I can only assume is their last encounter with the forces of order and law on the high seas.

Somewhat predictably the shipwright is dead, which prompts a visit to the local cemetery and the now mostly lost art of RPG tombstone messages. 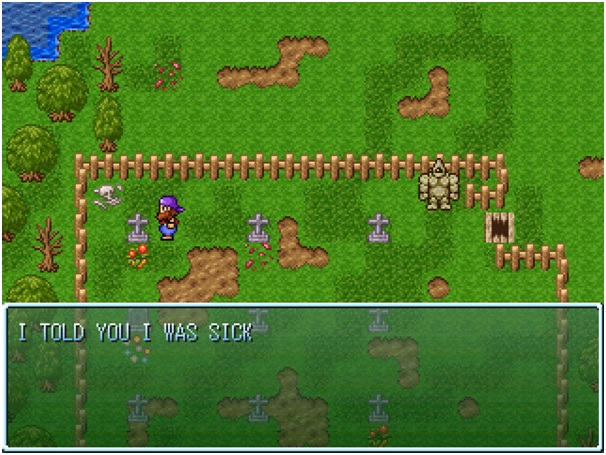 Of course nothing is ever as simple as just digging up the dead and setting them to work, in this case the poor shipwright has been cursed by a demon lord and has been transformed into a ghost forever condemned to haunt his decaying home, so after a battle with a rock, no really a rock, and discovering his plight it's off to an alternate dimension to gain his freedom. A cut-scene battle later and the demon lord turns out to be no match for the might of your pirate cutlass and searing wit and he removes the curse so that you can get your ship, erm ship shape again.

But fixing your ship is not the only thing on your handy to-do list, well the to-do list supplied by your handy first mate at any rate you also need to garner supplies. 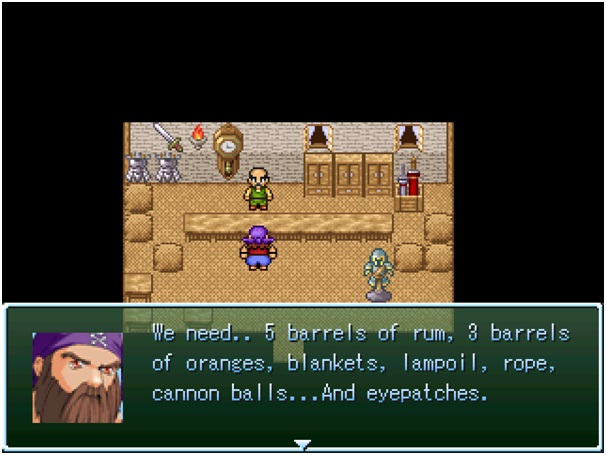 How can you have a scurvy crew if you give them Vitamin C?

Now it is well known that being a pirate means never having to say you're sorry, pay for anything so once again it's a quick clash of steel and a perfectly reasonable business transaction and the supplies are yours and you're ready to set sail to track down the greatest pirate treasure known to man, or at least to manga. Unfortunately that's where the game ends, though we couldn't really have the hero of the piece find that one thing after all, so it's hardly surprising it comes to such an abrupt end.

The game as it stands isn't anything to write home about, it's a quick romp with a few in jokes and a dash of humour. It could do with a run through a spell-checker to pick up on a few obvious and not pirate-based dialogue errors but other than that given the restrictions of time inherent in the competition it's not a bad showing and had me chuckling at a few instances which for a game that last about 10 minutes makes it worth the time.

Close
06/10/2015 11:32 AM
Thanks for the review, I'm really surprised that someone would show any interest in my game. As you pointed out, I had to rush the completion of the game because of the contest deadline. Altough I was not really satisfied with the degrading quality of the game I still like it and I think these types of humorous games are the best you can make with only RTP graphics - You don't have to impress with fancy tilesets, tricky battles or complex stories. Thank you again for the review and bye
nhubi

Close
06/10/2015 12:09 PM
I think you did pretty well given the time constraints, but I would go back and fix up those spelling errors now that the competition is over. You can add a bit of polish now without the deadline hanging over you.
unity