Hey guy! Not too much this week but I managed to implement the sweet looking somersault jump animation provided by Etienne! This we we started brainstorming about how to construct the trailer. I’d love to include a lot of environments at some point, but right now I’m focusing on which parts of what songs from the OST to include. Some trailers have a lot of jump cuts in the tunes, and others will use one tune throughout. I’m not sure which way to lean yet, and it may depend on how well the songs fit together.

So this week has been about developing the mechanics of the game. Last week I talked about a major change regarding said mechanics and this week I’ll explain what we’re working on at the moment.

In devlog 47, I wrote about introducing a combo system. I talked with Greg about it and he said that it wouldn’t work for this type of game. I agreed with him. STG isn’t a game like Devil May Cry where you just fight stuff. It’s a platformer too. You need to dodge traps, jump over pits, reach hard to reach area to grab loot and other collectibles. The combo system wouldn’t work.

In an email a long time ago, Greg had talked about being limited in time for the game, Pan needing to switch toasters at various points in the stage. I didn’t like the idea of forcing the player to rush through things but that idea stayed in my head and simmered.

So I thought, how could we give the energy meter a more important role? Then it dawned on me: have every action deplete Pan’s energy supply. Basically, moving around, jumping, shooting, dashing, etc.. will deplete Pan’s energy supply (as if it was a car running on petrol). This will encourage players to use certain actions sparingly. For instance, instead of spamming dashing or shooting (like in Mega Man), players will need to dash only when it’s necessary and really aim before they make a shot.

So what happens if the energy runs out? Greg suggested dying but I was against it. It seemed too harsh a punishment. If you run out of energy, Pan will move slower and will only have access to certain actions. This will make him a lot more vulnerable to hazards. Another possibility is to have a certain amount of energy recharge automatically with time (maybe 10 or 20% of the meter).

Of course, not all actions are as demanding energy wise. Just running about will require minimal energy while a charged shot will seriously deplete the meter. This gives us a lot of freedom creativity wise: have a skill which heals Pan (health meter), auto-resurrection, energy bomb attack (clears the screen of enemies). All of those abilities will require various amounts of energy.

In short, the player will need to manage his energy throughout each stage. I think this micro-management will be fun. Players will resort to hand-to-hand combat more often as, while riskier, it won’t deplete energy as much. Always shooting everything from a distance is fine but will take its toll on your energy reserve. Out of toaster actions won’t deplete energy of course.

So I’ve asked Greg to toy around with this. The whole thing will require a lot of tweaking of course (we’ll need to determine how much energy is required for each action).

I figured it would be nice to have a somersault move so I did that. I also wanted to challenge myself as this type of animation involves pixelling in diagonals and it’s harder. I made sure to add plenty of frames in there to make sure the movement was smooth.

I also did a temporary title-screen.

I had a chat with Goulven and Greg online. I figure I’d do some pressure plates and doors to vary the gameplay a bit. Goulven is having people test the new builds as we go along and one concern is that the game would end up being repetitive.
When you think about it, most platformers should be repetitive and yet aren’t. What makes gameplay interesting so that it doesn’t end up being repetitive?

Back in my days, in the NES days, games were very limited. I mean, the old Mega Man didn’t have a great variety of enemies or abilities. What made them interesting then?

Since we’re only going to have a total of 8 playable stages, we’ll need certain things for each stage namely:

1. Variety from one stage to another:
It would be unforgiveable to have stages too similar to one another since that are not that many stages.

2. Difficulty:
Stages should be hard. I don’t think players should be able to run through a stage on their first try unless their reflexes are out of this world. It should take practice and many trials to make it through otherwise the challenge is lacking.

3. replayability:
There should be a reason for players to revisit old stages. Grabbing a better medal would be one incentive. Another would be to have certain areas only available if you have acquired certain abilities.

I believe that if the difficulty is high enough, people will be encouraged to explore every zone in detail in order to make sure that they’ve got all the upgrades they can get their hands on to make progression less difficult.

Work is slowing down at the moment so I have more time to invest in this. I’ll admit it’s hard at times when I pixel for 8 hours in a row.

If I had to make my first indie game again, I would’ve gone for something less traditional and which didn’t involve so much work. Don’t get me wrong, I like this project but I’ve always been more interested in projects who break the mold.

Anyways, it’s still early in development so there’s still time to change the mechanics to make the game really unique and different than other platformers. I think there’s plenty of potential in the energy management if pulled off properly.

Hi guys, how are you?

This last weeks I did some test session with a motor's short demo, with the feedbacks  I spotted a few bugs and possible upgrades.
Now I created a good demo for the team and maybe you could see it... 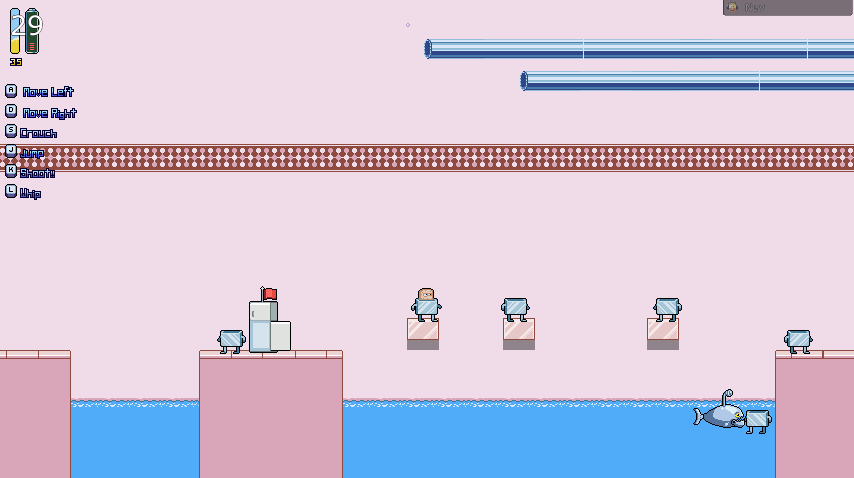 I wanted to talk about something a little bit out of my wheelhouse this week, which is story. Besides writing music for games, it’s probably the part of the process that I spend the most time thinking about. While story is never the first thing to jump out at me when I play a game, it’s often the part that I think about the longest. The best game stories work one of two ways, in my opinion. They either have a simple story that’s told in the details of the world, or a complex story told through voiceover or dialogue. Super Meat Boy and Fez do a great job with keeping the story simple, and letting the world clue you in to what happens there. Games like Bastion, Thomas was Alone, and the Stanley Parable use really great narration to tell a story. Others like Half Life 2, rely on dialogue to convey plot points. So where will STG’s story live? I’m already loving the bits and pieces of the world that clue you in to where Pan lives, and I’m excited to see more.