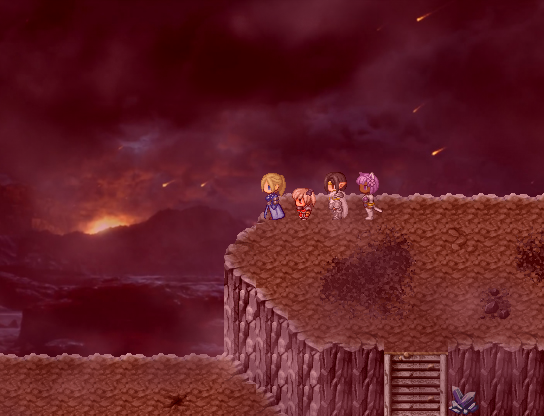 Close
05/28/2015 10:55 PM
Sort of reminds me of when Bahamut totally wrecked Ezorea. Was that what you were going for here? I'd only make the edges of the land a little more random and not so straight.
Noel_Kreiss

Close
05/28/2015 11:52 PM
As a person who had the grace to play that game before its improved version was developed and published, I can assure you that you're correct: Legend of Balance's starting point is awakening of Bahamut in Eorzea and ravaging the realm and then Loisuoix (I can't spell that name correctly, I'm terrible OTL) teleports the adventurers out of the harm's way.
I can also say that there are some differences from the initial release, but the story's core appears to be untouched (currently I just arrived in Cecille so I'm not sure how large the changes are at the moment).
(Strangely like most, if not all RMVXAce games, this one lags quite well. I think I might have frame drops to even 13-15 FPS, but I'm not sure. There is a keyboard shortcut to display FPS but I don't remember it now.)
Orophin
150

Noel: I tested the original version and the biggest change is about midway through the game. Otherwise, apart from the bonus dungeon, the game stays rather true to how it originally was.
RydiaMist

@WCouillard Yep that is exactly what is happening here! And yeah, you'll probably notice several unnaturally straight cliffs in some areas, haha. ;;
Pages: 1