I like Final Fantasy games.
No, wait, this is not enough.
I really LOVE Final Fantasy games!
But this game was one that was suggested by a friend that told me it was a fun fangame, very long, polished and well done. Clearly I was quite skeptic, but I decided to try it nonenthless. 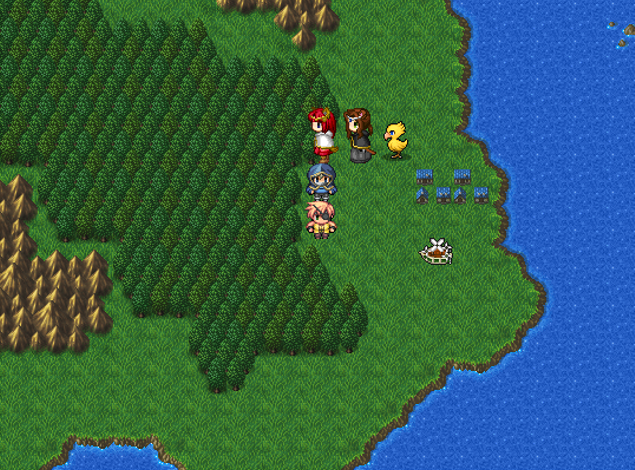 Like every good citizen I leave my chocobo parked outside of town!

Make no mistake: Final Fantasy Legend of Balance is a huge game: there are 20, yes, twenty playable party members of different classes with disparate powers and abilities and each one is well characterized . There are 30-40 hours of gameplay, quests and side quests, summons, the obligatory classical fishing minigame and even a shooting arcade part! That's a lot of content, both new and old, in fact being Final Fantasy means that there will be airships, blue magic, jump and mime abilities and so on.

But how is the story? The game starts in media res with a terrible apocalyptic war and the heroes facing the mighty dragon Bahamut. Then, after a particular event they are teleported away, separated and lost in a new world. Then starts their journey to go home... not before learning more about the world in which they were transported!
Ok, so this game is about new, original heroes (like every Final Fantasy installment of course! And being this a fan game it's a big plus, nothing against reusing old characters like Cloud or the warriors of light, but I prefer when the developer opts for some original ideas and creations!) but it's also a parody because this is a game not without humor! The plot in fact starts rather classic but soon there will be puns, funny party banter and so on. I liked the interactions, funny dialogues and the jokes because these never felt out of place! 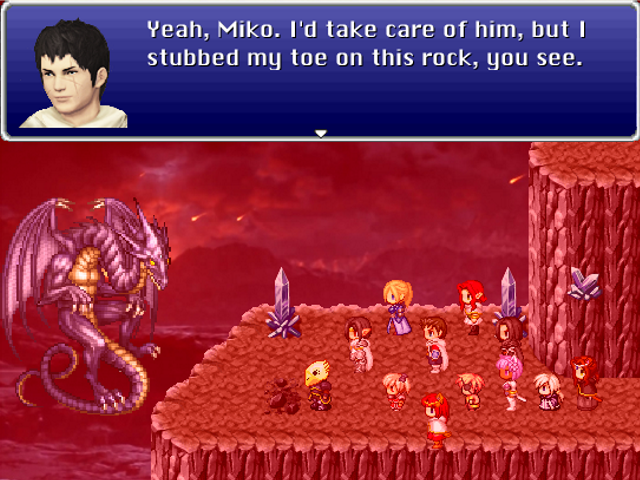 A spoiler about the final combat? NO! This is just the beginning of this game!

Combat and gameplay is very reminiscent of FFVI, one of the games with the largest cast: there are tons of different abilities (and I like that for example Fievel's monk abilities can be input into the joypad like Sabin's abilities in FFVI) and no character feels useless, despite having each one his own set of skills. There is no "instant win" button, but you have to learn how to use the abilities effectively (and part of the fun is experimenting with different party compositions), being this a real classic jrpg game with the usual classic side view combat encounters (just like FFVI in fact!). But the awesome thing is that there are also a lot of options including the difficulty settings, in order to make the game pleasant to play both to newcomers and veterans. And this is an extremely rare feature, one that I like a lot! Also, there is so much content, dungeons and quests that there is no need to grind at all! And speaking about activities, do not forget the typical exploration of the world map on foot, riding a chocobo or flying an airship, of course!

The music is... classical Final Fantasy tracks of course! But there are also some from other games (like Xenogears and Chrono Trigger), in any case nothing new or particular, but something appropriate to this kind of game. Well, very appropriate since it is a Final Fantasy game!
The only flaw I saw are the maps, in my opinion: these are not bad or ugly but they feel generic and bland, I mean this is probably due to the tileset and charsets and used, that lack that special "something" that would make them stand out. Ok, it's not that I would ask for custom graphics, still I prefer the old pixelated FFVI look that is more similar to the Rm2k3 games, but maybe it's a question of personal taste. On the other hand I like the facesets of the various heroes, they look different and there is no sense of deja vu. Also the monsters are both new and classic entries from the Final Fantasy bestiary. Nice! 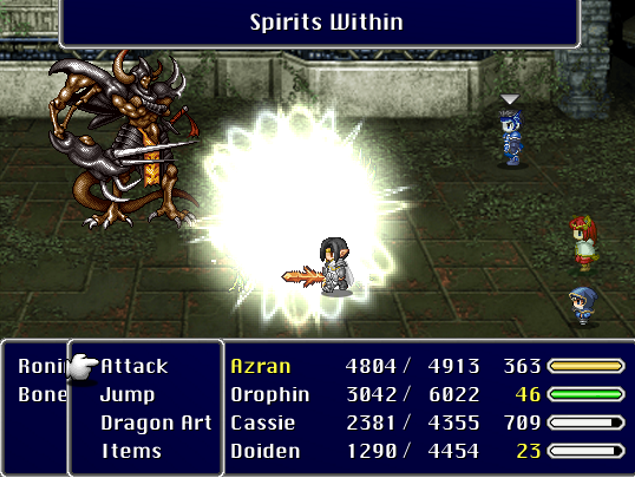 This is Final Fantasy, so big monsters, large swords and special flashy attacks are all included!


Final Verdict
This is a cool game for several aspects: it's big and full of content, has well written comedy moments (like Gradd's love for cheesecake!) and story, and offers a plethora of options and settings, making the game quite player-friendly with the customization options. Clearly this is a FF fangame and parody, so if a player is not into Final Fantasy he or she may even not like this classic jrpg (I mean, this is all about what fans usually love about these games, so do not expect something different... that would clearly feel out of place!), but that's not a problem of the game that is excellent. No doubt about this!

As a fangame, this is one of the best, it's obvious that a lot of time and care went into this project and the result is very good indeed, since I spent 30 hours with this game!
In the end I'm happy that my friend showed me this game, that I missed noticing so far! Because it's good, very good, there is a lot to do and so much content that it never gets boring!

Close
06/21/2021 09:16 AM
I'm really happy to hear you enjoyed the game so much! I'm glad you appreciated the story and humor, and got really into the battle system and played with all the characters and customizations, that's definitely where a lot of the work went. And yeah, I'm the first to admit some of the maps are a bit bland and function over form. For the graphics, we decided to use a lot of tilesets from the psp/mobile versions of the games because it was something we hadn't seen done much compared to most FF Fangames that use/edit FF6 assets. That said the SNES pixel look is definitely a lot more iconic and recognizable!

Thanks so much for the review! =)
TheRpgmakerAddict

author=RydiaMist
I'm really happy to hear you enjoyed the game so much! I'm glad you appreciated the story and humor, and got really into the battle system and played with all the characters and customizations, that's definitely where a lot of the work went. And yeah, I'm the first to admit some of the maps are a bit bland and function over form. For the graphics, we decided to use a lot of tilesets from the psp/mobile versions of the games because it was something we hadn't seen done much compared to most FF Fangames that use/edit FF6 assets. That said the SNES pixel look is definitely a lot more iconic and recognizable!

Thanks so much for the review! =)

The funny thing is that despite reviewing games in this site, this was suggested to me by my friend that liked this a lot! She is italian and probably playes more japanese games that rpgmaker games in english (in fact I usually suggest her the games I review here, in this case it was the opposite)! So yeah, the opinions on graphics and maps are all mine (I'm a rm2k3 fanboy, I know), but maybe other players don't care or like them so it's ok!
Pages: 1