Forbidden Library is a fairly simple story, a woman with the highly suspicious name of Miss Smith enters the home of an eclectic collector of occult books to study at her famous but supposedly exclusive library. Though given the ease with which she is granted entry it doesn't appear to be all that exclusive. Things, however are not as they seem, as the woman is actually in the employ of a somewhat shady gentleman who has tasked her with retrieving an artefact allegedly stolen by the library's owner, Miss Kalaya, at some undisclosed point in the past.

After being escorted to and then left alone in the famed library Miss Smith makes a cursory round of the volumes currently on display, most of which definitely fall into the run of the mill category, but the occasional one that would be worth the price of admission if that was the real reason for her entry into the house. 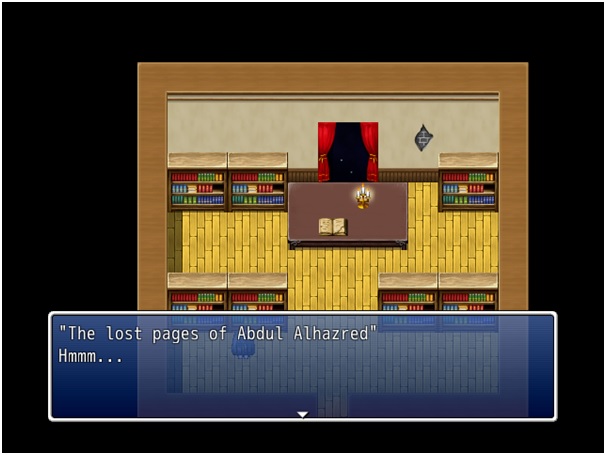 Back away slowly, don't let the pages see you are afraid.

Not long after beginning her perusal of the tomes on the shelves a piercing scream is heard and our faux historian and bibliophile of course rushes to investigate. From this point on the game follows a pretty standard horror format. Bloodstains on the walls, broken floorboards and cracked walls where before one assumes the place had been in good repair, atmospheric sound effects to give the feeling of suspense and doom, and a game saving cat. OK well that last one isn't in the horror game 101 coursework, but since the horror genre usually requires a twist in the level of acceptable behaviour and perceived reality to be successful, I see no reason why you can't save your game via a friendly and conveniently available feline.

The developer's primary language is Spanish and he's made the game bilingual, in that you can play in either language. The English isn't terrible, with a few spelling and grammatical errors along the way but nothing that is too detrimental to comprehension. Though he has left one area of the game untranslated, the equipment screen, but since you don't actually ever find anything to equip it's really more of an oversight than a problem. I would suggest just removing that option from the menu, as has been done with all the other superfluous options.

So after discovering your host's eviscerated and headless remains in her fairly spartan bedroom, the intrepid Miss Smith ventures out to find the missing appendage and some answers along the way, not to mention one would assume the artefact she has been hired to find. Cue the objects moving on their own, bottles falling ominously from stable flat surfaces as you pass and the obligatory chase scene or two. Though if you do actually let the thing chasing you catch you a lot of the questions in the game get answered in a single custom game over visual. Of course whilst that is a bonus for the player the character can't be expected to know what is going on this early so running away is the smartest if not the most informative move. 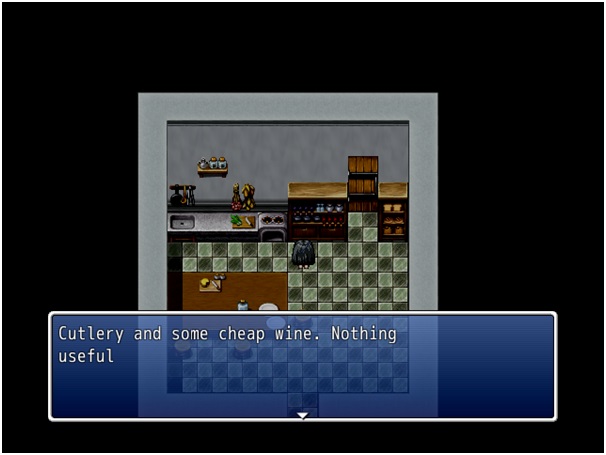 Speak for yourself; any wine would be fine at this point.

After finding the obligatory big red clue and of course the means of defeating the malevolent creature infesting the house in close proximity it simply becomes a matter of fitting tab A into slot B in order to solve the mystery and get out of the house with both the purloined artefact and your limbs and entrails intact. The final chase scene isn't particularly strenuous, as the developer has kindly included a great many items you can put between you and the creature chasing you to impede its progress. As long as you've followed the clues and garnered all the items you need to defeat it, the final sequence simply becomes a case of leaning on the shift key. The epilogue does make a reference to everybody's favourite Miss Smith, which whilst completely incompatible with the actions of the one portrayed in this game, are always welcome, and the additional credit gag was a nice touch.

This game is the developer's first, so It was never going to be a magnum opus and for a first game it has pretty much all the mistakes you would expect from inexperience, but it still manages to hang together well enough without too many irritating moments. You aren't going to discover anything new in this game, but if you feel like being chased about an adequately mapped house and working your way through a linear but serviceable plot and mystery then give it a go and let the developer know what you think, for as we all know feedback is lifeblood to the novices out there.

Close
07/01/2015 08:05 PM
Someone got the Lovecraft reference! Yay!
I really enjoyed this review, and you pointed out a lot of stuff that I need to improve for future games. So thank you for taking the time to play and write your opinion on it.
nhubi

Close
07/02/2015 03:24 AM
Well if you're going to go with horror, may as well use the classics. I'm glad you could get something out of this, and trust me for a first game it wasn't a bad effort, there have been much worse. Good luck with your next project(s).
Pages: 1