0 reviews
Penumbra Crystallis is a complete remake and reimagining of Final Fantasy Blackmoon Prophecy as an original game rather than a fan game. All Final Fantasy assets and references are being removed, and the story/world are being adjusted accordingly to make up for the removal of every aspect of Final Fantasy.

Penumbra Crystallis gets its name from two elements of the original games storyline, the Blackmoon phenomenon (Penumbra) and the Crystals of Element (Crystallis).

All graphics will be original. I will be attempting to do all character sprites and tiles, but am likely to look for help with monster sprites and character portraits. In addition, all music will also be either original or royalty free.

Large changes to both the world and story will be made in order to keep players of the original Blackmoon Prophecy as in the dark as new players. While I intend on changing up a lot of locations and story beats, the original adventure is mostly going to be left intact.

Penumbra Crystallis. It is something familiar... yet different. Take the original Blackmoon Prophecy, remove all Final Fantasy elements, add lessons learned over the years from other projects, and sprinkle in some new plot elements and story beats, and presto! You have Penumbra Crystallis!

This project is being developed in RPG Maker MV and is a full-on remake, and reimagining, of Blackmoon Prophecy as an original project. This info dump addresses questions I've had thrust at me, as well as answers to questions that nobody's asking but probably would at some point! So, without further adieu...

What's happening with the graphics?
All Final Fantasy graphics are gone! I am attempting to do all field sprites and tiles by myself. We'll see how far I get with that, but I'm happy with my progress so far since I've never taken on a task like this before. 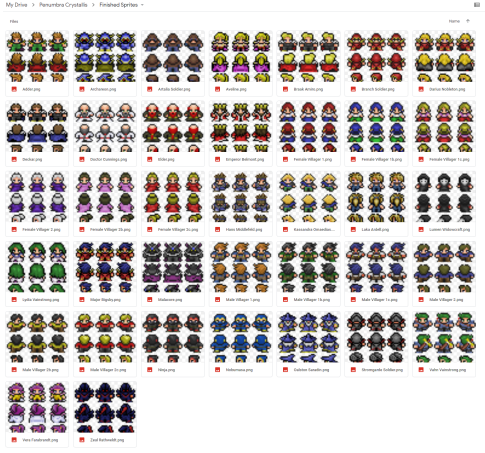 How will battles play out?
Pretty much the same since I'll be using RPG Maker MV's side view battle system. There are two things worth mentioning though!

First, characters will feel more unique and there will be abilities/commands that were absent in Blackmoon Prophecy such as the steal ability among other things.

Second, the battle graphics for the characters will match their overworld chibi sprites. This is a design decision on my part, as I want the characters to feel largely the same in and out of battle. I feel that the chibi sprites bring a "lighter" air to the game as well, and will also try to incorporate other lighter elements into battle sprites. One example being that, when a character hits zero hit points, they won't collapse. Instead, they'll turn into a gravestone that will likely read "RIP" and have a personal keepsake. For instance, Oalston's gravestone will probably have his hat resting on top of it.

Are all of the playable characters returning?
Nope! Since this is a remake AND a reimagining, things won't unfold in quite the same manner as before. The major characters (Vahn, Vera, Oalston, etc.) will still be around, but some others are being renamed and given new identities while others are being cut entirely.

One character that is being reimagined is Ami. No longer will she be a blue mage, but instead a huntress who is familiar with the Lenadian countryside and can act as a proper guide for the party. She will still incorporate some form of blue magic into her attacks. She will attack with a bow and may have an animal companion or two.

Characters such as Bosche, Jasmine, and Omicron are being cut due to being largely unimportant in the grand scheme of things. Bosche and Omicron simply will not exist while Jasmine may appear as an NPC. I'm also figuring out if Godot even needs to return since it is my intention to make Oalston feel like the defacto elemental magic user this time around (other characters will use different types of magic).

What does all of this mean for the story?
I'm not telling the same story beat for beat. If I were doing that, then I'd honestly feel like I'd be wasting my time. Penumbra Crystallis uses the storyline from Blackmoon Prophecy as a base and there will be various changes along the adventure that will surprise the player, because the game is not going to unfold in the same way. Players may find themselves going to certain dungeons or towns at moments in the game that catch them by surprise, and unexpected plot points that were not in Blackmoon Prophecy will pop up from time to time.

The story will still revolve around Vahn's group trying to save the crystals from Malacore, but the story will focus on the people around the party a lot more as well. I intend on making the story have a little bit more political intrigue, and for there to be more strife with groups that the player fought against in the first game such as the Ivalician (now Stromgarde) generals or the Lindblum (now Artalia) rebels. Characters like General Braak and his cohorts Deckar and Aveline (formerly Eva) will get much more attention, and how things unfold with Darius will be much, much different this time around.

Is the world going to be the same?
Gaia is going to be "sort of" the same. If you head on over the the game's screenshots, you'll see that Gaia is roughly keeping the same shape, but the actual kingdoms are structured a little differently. Branch is much more compact than before while Lenadia has had huge chunks removed to trim the fat/filler that plagued players there. I'm very aware of what errors and misteps I made with Gaia in this game since I've grown so much in the 9-10 years since Blackmoon Prophecy was completed, and I actually look back on the original game in disdain because I know it could be so much better. I'm fully open to suggestions on what to "fix" from the first game, but just know that I may already have plans on fixing what you may suggest since I am hugely critical of my own game and have a laundry list of issues that I have with it.


What will be used for music in the game?
I might use some of Brandon's tracks that he composed for Blackmoon Prophecy II, I mostly intend on using Winged Seraph/Yufuruka tunes such as:


How far along is the game so far?
I haven't even made a single map yet! Even though I made this project public several weeks ago now, things have been a bit slow. I'm mostly just doing document work and figuring out what needs to be reworked, what Final Fantasy names need to be removed or renamed, and how things will unfold differently. I've also been busy working on sprites using my original template that is meant to evoke a strong sense of nostalgia in NES Final Fantasy fans. Currently have 39 sprites done and have been averaging 2-3 per day for the last week, so I should have a good number of them done soon.

If I get enough original assets completed in time, I may try to remake Blackmoon Prophecy's intro using Penumbra Crystallis music/sprites for fun and post that on December 25. It won't be the actual game's intro because that will actually be in Vahn's hometown this time around, it's just a fun little thing I feel like doing to get my feet wet with using my original assets.

Anyway, that's mostly it! Any further questions, fire away! If you're interested in getting "micro updates" or just hearing about how the game is progressing, you can also hop onto my Retroist RPG Makers Discord server and follow the Penumbra Crystallis channel.

Vahn outside of Branch Castle.

Vahn's hometown of Valla. This town did not show up for 10+ hours in Blackmoon Prophecy. In Penumbra Crystallis, the game begins here.

Merry Christmas! On the left is Branch Village in Blackmoon Prophecy and on the right is the Penumbra Crystallis recreation of the town.

Close
05/11/2020 12:15 AM
Note: Top and bottom of game's window were slightly cut off when recording this because OBS was being a jerk. Testing the overworld minimap and running around what is currently mapped of Moss Cave (first dungeon).

Took me several weeks to decide what to do next after the loss of Blackmoon Prophecy III before I came to the conclusion that I wanted to remake the first Blackmoon Prophecy as a fully original game, so here we are! Say hello to Penumbra Crystallis!