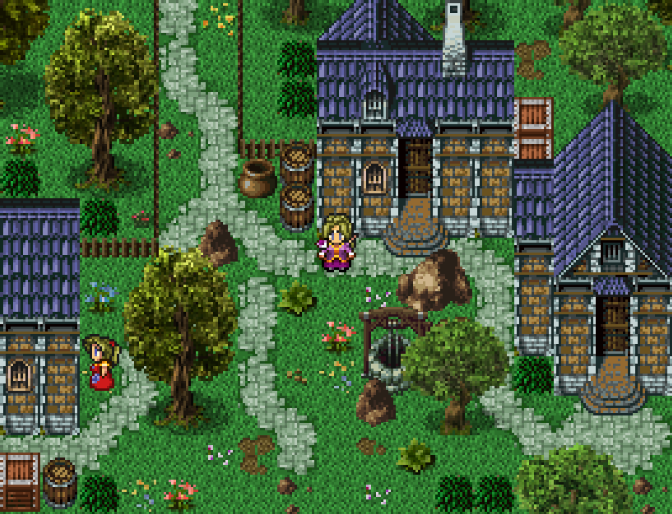 Changing the colours up some more so that things don't feel exactly like VI (or Blackmoon Prophecy II, which uses VI tiles).

Yeah, it was just way too hard to use for what I had in mind.
Blind

Close
04/19/2020 07:45 PM
Looking good! The trees appear somehow more low-fidelity than the rest, though? Perhaps the image was just stretched out of proportion.
JosephSeraph

Close
04/19/2020 08:57 PM
Awesome!! I like the choice, those are Ancient Dungeons trees, right? I think the issue with them being low fidelity is two things: 1. scaling issues (try scaling them to 16x16 tiles first and THEN scaling them up to 300% since it's a MV game, that'll work heaps better) 2. palette issues.

The palette issues are a bit more complex to solve. That depends on what sort of palette you want the actual, final game to have. You could, for example, load a tileset with FF6 trees, turn it into indexed color mode (to automatically generate a palette based on these trees) then paste the AD trees in there. They should automatically adapt to the palette of the indexed image, blending better with the style.

But part of me thinks you may want to have a different palette from FF6 / BP2, which makes me think that something like Suikoden and Wild Arms rips will fit better with the Ancient Dungeons trees. (these three styles merge pretty well, as all of them are high color-count, beautiful 32-bit-ish tilesets)

That would mean, though, scrapping most of the FF6 tiles in favour of (artwork like) the aforementioned games. Alundra works, as well, although it's got 32x32 tiles instead of 16x16; you might be able to salvage something from there. (and Beyond the Beyond)

Another possibility, but that could require more skill, would be to take ff6's tiles, opacity lock them then paint them over on photoshop or something -- not as pixel art, but just add some texture on top, some shadows, etc. to increase color count and remove the harsh outlines. That would provide you with more control over the final style as well. But yeah that's probably the hardest path.

Anyway, lookin' good! Also sorry for the usual in-depth graphics blah-blah-blah-ing, and i'm looking forward to enjoying this, if it's at least 1/10th of the fun i've had with BP1 and 2 i'll be very happy.
Pages: 1