Lost but not alone.

Girl, her brother and his lamp is a lovely game. There really is no other adjective that quite conveys the mix of beauty and wistfulness that is prevalent throughout the course of the game. That isn't to say there aren't moments of danger for our two child protagonists, but that is mitigated by the knowledge that no matter how many wrong turns they make in this strange landscape, they will survive.

Though if I were to choose other terms, they would be visually appealing, innovative, somewhat surreal, entertaining and in places hilarious.

The game begins in the home of the children's aunt, where the brother inadvertently touches a magical lamp, though not of the Aladdin's cave variety, more like a portkey from the Harry Potter universe, and just like a portkey this seemingly innocuous object transports these two unwilling passengers to another place. 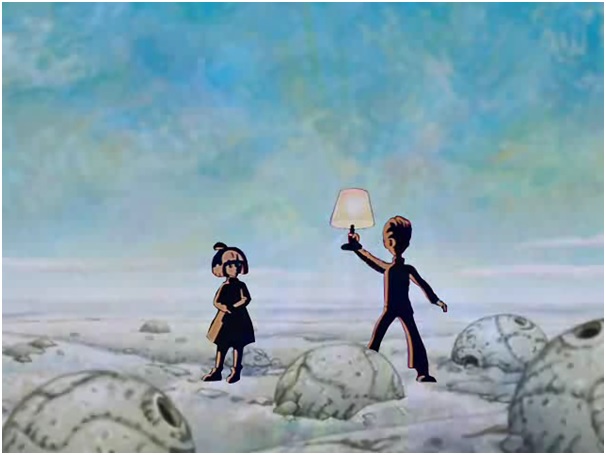 We're not in Kansas anymore.

Without any clues as to where they are they are given a series of choices, displayed above their heads via bright yellow ideograms. Without knowing where each path will lead they choose the one they think will be the best and are then transported to another place. A wrong choice will lead to a scenario that ends in their 'deaths' and the children find themselves back at the start. A correct choice will lead to multiple other choices. Most of the ideograms are fairly self explanatory; the spaceship for example will bring a flying saucer into the frame which will then beam the children on board where they will then be faced with situation relevant choices as to how to proceed. The sandworm will send all the little Genius Party creatures at their feet scurrying for safety in the sand while the children end up as an entrée, an event that luckily happens mostly off-screen.

Each choice instigates a short animated interlude and I don't mean a cut scene, I mean an animated short, a mini movie, showing the consequences of the choice made. There is no interaction from the player in regard to moving the children other than using the arrow keys to indicate the choice made, from that point on it is in the hands of the game to take you to the next scenario.

This game is listed as an adventure and a puzzle, but it really isn't. It's a visual novel with the emphasis all on the visual. There are no words spoken or text in the entire experience, but it really doesn't need it. You know by the expressions and actions of these two children exactly what they are thinking and to a certain extent feeling and it's just wonderfully portrayed.

There are 8 different scenarios and upwards of 14 different animated sequences before you come across what appears to be the master of this particularly surreal place, and you get the only clue you are given about what you need to do in order to get out, before it sends you back to the beginning to try again. If there was a complaint I could make about this it's that those clues are shown rather rapidly and since there are 8 of them, it's hard to catch them all. 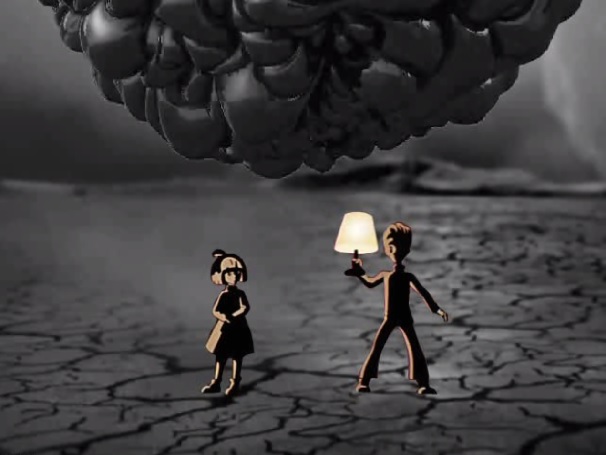 This isn't going to end well.

The whole 'game' and I put that in quotation marks for a reason takes little more than 10 minutes to go through, even with mistakes along the way, and you will make them, but it's a feast for the eyes and senses. So much so you will find yourself going back to make mistakes on purpose just so you can experience all the different animations that have been created for this piece. There isn't a single recognisable RPG Maker graphic, sound or aesthetic anywhere in the game, though anyone who knows Genius Party will recognise quite a few. Even the title screen is non-RM and is a charming piece of work showing the fear and wonder that these children are feeling as they begin. On a purely mechanical note once you reach the final sequence it really should close the game rather than take you back to the title as that just pushes you into the opening animation again so you need to crash out to finish the game, which I always find a little sloppy.

Irrespective of its shortcomings this experience was lovely, there's that word again, but it really was and Arlekin1980 has given me a marvellous experience. It's too short by a country mile though given the amount of work that must have gone into the movie sequences I can understand why it is so, though it doesn't make my wanting it to be longer any less heartfelt. It would have benefited from incorporating the sequence of events that led the children to finding the lamp in the first place to provide some context, rather than having to rely on the information provided on the game page, and I would have appreciated a moment of relief and dumping that accursed lamp as they finally make it home to complete the picture, but I can create that within my own mind if needs be.

Go and experience this, just stop reading and go.