1 reviews
Save to Dropbox
Synopsis:

Two teenagers, brother and sister, living in a remote village, find in the basement of their grandfather a treasure map. Excited by their find they leave the village to try to find where this map leads...

They soon find an old cave that no one seems to know and deep inside they discover a giant robot that will change their destiny.
Will they uncover the secret behind the Simurions, these robots from another time?


What is "Fighting Robots Quest"?

This is an RPG featuring a world where "Simurions", ancient robots from a lost civilisation, have awaken. The goal is to discover them and using them through battles.

My inspirations were Pokémon and Suikoden, for its large roster of playable caracters, the first Legend of Zelda and Final Fantasy 6 for their open world and narrative approach. My vision for this project was to make a simple but solid RPG with enough depth to be compelling and have a lot of replay value.

The project runs since October 2008.


What are the features?

-No less than 140 playable characters.
-Robots to find, build, customize and upgrade.
-A world every player can travel their own way through exploration capacities that they can learn in any order they want.
-More than 100 battle skills to learn.
-A fuse system between robots to make advanced ones.
-A rich world without to much hand holding packed with secrets.
-Two versions of the game offering some exclusive robots and stuff.
-A giveaway system between players to give robots using in game passwords.

The list is pretty long and won't be completely revealed before the project is over because discovering them is where the fun is.
But here's some: 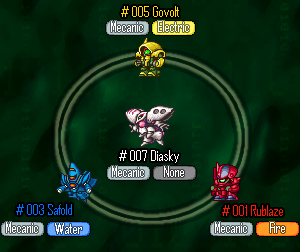 This is the first Simurions you can find. The player can choose one of them based on its final form, each of them have its own pros and cons.


As you can see there's various types and elements: Types are about building and growing aspects and elements are about strengths and weaknesses. Try to make a balanced team!

I added a new type of tileset for caves to add variety. They're used in Swamp or Jungle areas.

Close
06/25/2015 09:18 PM
This looks pretty great, but I'd like to recommend that you move the images to the actual image tab instead of on the description page, and that you put the story description at the top, since that's what most people would be looking for.
Cap_H

I wanted to illustrate texts with pictures the most to make it entertaining to read but it seems it's not the way it should be done.

I put almost all non contextual pictures in the image folder. But it seems hard to see if there's more than 4 and clicking on each one to see it make me feel people won't bother doing it. ^^'

Anyway, thank you to have validated the game pitch! :)
Luc

However, great game. I hope you can keep this up untill 2017 like your Target Date says.
Boulon

Yes, I've been told that before by someone else, I guess in game it's not that terrible but some people are more sensible than other for that.
(In fact it was pretty much impossible for me to find background with the simple cartoony style of Mother 3, most of them are a little more realistic.)
Liberty

Close
06/27/2015 10:42 PM
I love the earthbound look combined with some pokemon elements its like a match made in video game heaven!
KoopaKush

author=Liberty
You could make background versions of the maps. That would work~

I believe making battle backs from your tilesets would fit the overall feel a lot more efficiently, not to mention there's way more to work with as well!
Keep up the great work by the way! :)
BurningTyger

Close
06/30/2015 02:30 PM
BurningTyger : Yes! I plan to ask to english native to do a script review of the game at least after it'll come out. This english is like a 1st pass, I know I miss a lot of flavor not being english native but I bet on making the game directly in english to have more accesibility. Thank you!

Liberty / Koopakush : Thank for the help. You have a good idea, but tileset background are not my cup of tea for battles... I never found them really appealing, at least in my games. :(

Like I said, you're not the first people that tell me this. But in the other hand there's some that find it ok too. Personnaly I could say I'm picky about graphic homogeneity but in this case I don't find it too hard to accept. Since in game the 2 types of visuals are separated by a battle transition it's easier on the eye since it's not a direct cut from one to another.

Also, if I plan to change the background visuals What about the battlers and battle animations? There's in the same type of the background like "semi-realistic" against the "cartoony" tileset/charaset. I can't change them all.

Basically, I'm agree with you. I'll wait for more feedbacks about people when the will play the game (because I think the impression is different while playing instead of looking at all the screenshots at once). If it's a flaw for too much people and if it's really something that could make the game better I will do something for it. Maybe ask someone to make "cartoony" versions of the battle background for me. But as I said, if it's too cartoony then it will be the battlers and the animatiosn that will look off.

Anyways, thank for your comments and your help. It's a really good support !!
shayoko

Close
07/01/2015 07:43 PM
robots aren't my thing but im a little interested in this.i used to play pokemon good memories :3
i wonder if there will be a legendary type (like super rare one of a kind that stands out in abilty)
CaptainCrimson 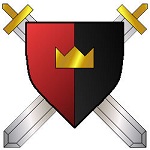 Close
07/02/2015 05:07 AM
I really really REALLY like how this looks. It has a wonderful nostalgic charm to it. :)
I look forward to the finished product
Boulon


There will be some. ;)
And to the contrary of Pokemon they aren't "too strong" but will have very good abilities but will take 2 slots the party instead of 1.

I am not sure if the sprites are rips (some are recognizable) but looks pretty neat!
Good recolor of Cybuster too.


FYI : The first demo will be available this july.
AlexanderDollesin
0

and can i ask if there guide to get all 140 playable characters. and i hope the fuse system is not hard as it look (>.<)
Boulon

The game won't be finished anytime soon because it took me a long time to make half of it. It's currently a 15h game, I'm planning to make it a 30h game.

For now, a demo will be released very soon, this jully. It will be the first 2 hours of the game. And by the end of summer vaccations I will release a second demo with 2 more hours a gameplay.

I will do a complete walkthrough for every secrets in the game when it will be finish, of course. But for now, I will let the players found the secrets in the demos to know if they are too easy or too hard to find.

As for the fuse system, it will be available after a while. Basiccaly you can find 2 robots that are compatible and fuse them to become one permanently. There will be like 15 fusions possible which means it's not all the robots that can do it but quite a few. The fusions are generally very powerful robots since you have to sacrifice 2 to have 1.

I'm happy to tell you the first demo of the game is just released on Rpgmaker.net!

-The duration of the demo is 1 to 2 hours. Your save will be compatible with the next demo.

-You don't need RPG Maker 2k3 or the RTP to be installed on your PC to run the game.

-The world map is a rough sketch, it's only there to be functional.

-To run the game, go into the folder and click on RPG_RT.exe.