Story: As is typical of Wishiyo's games, there is very little here in the way of a story, but there does seem to be more of one here than usual. You play as Masgard, a monk who just can't keep his nose out of anybody's business, which I guess is as good a reason for an adventure as any. The game starts simple enough: you've just moved into your new house and you're sitting there reading when you decide it's time to get a job. Of course, usually, I make sure I have a job lined up before I move, but to each his own. Well, the second you step out the door, you find a job. You have to slay a dragon. It gets better. The soldier who begged for help slaying the dragon isn't going to help you slay the dragon. So begins your journey for a job. You walk through several fields to a town where you finally meet the king. He has a job for you. A rival king is trying to conquer the kingdom. You have to destroy his forces and take him out.You don't have to destroy his forces alone, however. Nociel will help. 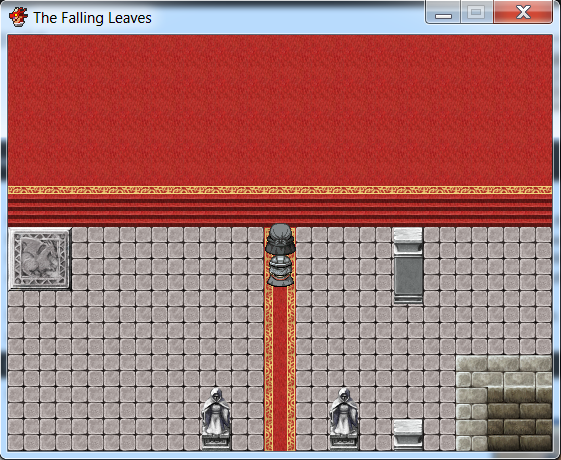 Clearly, the king and the interior decorator had an argument about
how much carpet to set aside for the runner.


Writing: There seems to be quite a bit of grammar and syntax problems that can be explained as English being a second language, so I won't complain about it. It doesn't really take away from the game, and I've frankly seen much worse. Deadpan humor seems to be the style here. The characters seem to be taking everything dead serious, but there's no way to take any of it serious. Masgard jumps into any situation whether he belongs or not, whether it's wise or not, or whether anybody's even doing anything wrong or not. Basically, you play a nosy, busybody, know-it-all. Poor Jonnie...she's just a poor witch who because of her religion must hide her practice, and you find her secret alter, burst in on her and give her the 3rd degree. Thankfully, she joins your party.

Gameplay: Still on the poor side, but a huge improvement over Nociel and Nociel (After Story). Where as Nociel balanced at way to easy, and (After Story) balanced at way to hard, Falling Leaves balances back on the easy side but makes a lot more sense. Frankly, too easy is preferable to too hard, in my opinion. Of course, on the first few maps, you can run over your enemies like a freight train, you're stronger than any of the bosses (Seriously, you start with something like 900 hit points and the dragon only has 400 HP) and the opening of the game is basically a cakewalk. After the king balance gets a little better. I do feel that enemies get a bit too high of a priority when it comes to status ailments. You're constantly using antidotes, which you only seem to be able to find in town shops, and with the man-eating plants, you're constantly asleep. Some level of resistance against status ailments would be nice, or at the very least, lower their priority in enemy skills a little so that you're not being constantly spammed with them. Bosses early on should be easy, but not this easy. The dragon, the skeleton and the murderer are all a lot easier than they should be. In truth, I would probably give the dragon 3000 HP and raise his defense by a few points. Another issue here is restorative items. There simply aren't enough and they're extremely weak. No enemies seem to drop anything, all you can find are one potion per town, and if you need more, you have to buy them from stores. Weapons and armor quickly become too expensive for this to be practical. This means that your best chance for restoration is hoping you can make it to inn, of which there are thankfully plenty. Next, the potions and all restorative items are way too weak. When you've got characters starting at 1000 hit points, a potion that restores only 30 HP is simply not acceptable. The Hi-Potion isn't much better. The fish only gives you a little more, and Nociel's heal spell is just as meager.

Graphics: Big improvement here. He's still using RTP and his maps are vastly improved, but the building interiors are still way too big. Towns seem a little underdeveloped, too. Actually, Wishiyo's town maps were better in his previous games. Yes, the towns in this game have better overall buildings and layout, but there's a certain sterility to them. There's a lot absent from these towns. The building exteriors are much better designed. There are none of the strange towers or random bridges that you could run across in previous games. But there's a pronounced lack of people. There are no stray animals running around. There's no wells. There's a farm field in the first town, but there's no logs set along side the house for cooking fires. There's no clothes hanging out to dry. There are no vines creeping along walls. The field maps are quite small, well decorated (still a little sparse, but they are much, much better for this game). Navigation makes sense! Yay! Towns, deserts, swamps and evil dungeons aren't crammed into one map like in the Nociel and there are no bizarre towns inside of crypts like in (After Story). Going from town to field is linear, sensible, and seems to be based on the old Legend of Zelda style of map navigation, except you're confined to specific paths instead of just being able to exit the map anywhere.

There's something else that desperately needs pointing out. Masgard's face chip. He seems to periodically switch between a cool anime drawing of the face and one of VX Ace engine's rather lacking RTP face from the random generator. Wishiyo might want to go back and make sure his face chip remains consistent. An easy way to do this would be to simply save a copy of the preferred face chip over the copy of the unwanted facechip (using the same name, and overwriting, of course). He'd have two of the same facechips in his files, but he wouldn't have to go back through the text and change every single misused facechip. The way it is now is very jarring.

Glitches: There's a few switch bugs in this. For one thing, if you don't want to fight the dragon, you can just walk on by him and still get praised by the king. The dragon will be sitting there until the very end of the game, alone, forgotten and ignored by the NPCs, wondering why nobody's scared of him anymore. Jonnie appears to be an optional character. Your conversation with her discusses your quest for the king, whether you've met king or not. These are obvious switch issues. Simply applying switches to these can solve the bugs. These are what I found. There may be more. If you have a bit of finesse in your programming wrist, this game's story progression appears to be linear, so you could, if you wanted, just tie the dragon and Jonnie to a single variable. Beat the dragon, add one to the variable to activate the king's quest. Activate the king's quest, add one more the the variable to activate Jonnie...

Conclusion: In spite of all of my complaints, this game really is an improvement over Wishiyo's previous work. As long as his games keep improving, I'm going to say that his games are worth keeping an eye on. I wouldn't recommend this game for serious gameplay, and it's full of examples of what not to do, but some people may find it fun just as something to pass the time. I can't say this game is good, but I can't say it's bad either. I score it at just below average which really isn't too bad for a lot of games on this site. This game is a big improvement over Wishiyo's previous offerings, but he still has a ways to go. Keep up the good work, and keep improving.