The IGMC results are in! Free Spirits won the engine prize for RPG Maker. Getting this announcement on Halloween was quite the spooktacular surprise! We’ve been working on fresh new content for the game as a whole, but before an Expanded Version, we’ll be putting out a “director’s cut” of sorts for the contest version. The contest version was rushed, no doubt about it. Now that we’re un-rushed, we’ve gone back over and smoothed out some of the problems. We’re also adding some new things that’ll be present in the Expanded Version of the game as well.

So what kinds of changes are we talking here?

No more getting stun-locked while Beckett does nothing but spit booze at you. No more “Grady claims he gives you sugar but in reality keeps it to himself”. No more “why isn’t Sofya talking to me?” As of this writing, all the known issues have been fixed, and we’ll get a “known issues” type page up soon so this can be documented better.

Besides the outright bugs, there’s just some things several people complained about and we’ve since changed. One of those things is changing the instances of auto-scrolling text. Now you can read every line of Louis Callaghan’s in all its violet-hued glory.

That’s right, folks! This visual novel/RPG hybrid is getting even wordier. Those brave souls who play this game and voice-act all the text… now there’s even more! (And thanks to the magic of editing, in some spots there’s actually less)

Much of this dialogue is in the form of extra lines for skills like Dahlia’s Storytelling or more jokes for Rex’s Comedy Act. The skills you might see several times during an encounter and, y’know, it gets dull after a while. We can forgive Dahlia for not remembering if she’s told a story before, but Rex should know better. There’s also new dialogue in skills like Comfort and Nagant, just to try and keep things from feeling stale.

In addition to some fresh stuff for skills, we’ve fiddled with the actual writing in each encounter. Some spirits, like Rex, have been fairly unchanged since we got a lot of good feedback the first time around. Others, like Beckett, have gotten some extra love and rewrites.

One of the new mechanics is the ability to show people items you’ve found. Just walk up to someone and press the S key, and voila! You can get their opinion. But do you really want that?


But Also Here’s Another New Thing

Another new thing is flavor text that displays at the start of a turn. Those with a keen eye might notice this is similar to Undertale’s lines about things like “smells like angry sushi”... which yes! It’s where the inspiration comes from. We’re doing our best to lend our own style to the idea, since this can be a way to communicate fun character things, as well as provide subtle cues on what to do next in an encounter. The lines vary by all kinds of things -- Lana/Kozmin’s moods, the ghost’s moods, or the topic you’re currently discussing in the encounter.

Beckett Gets a Mini Level! Not only does this provide some context to Lana and Kozmin’s first night on the job, it serves as a handy-dandy quick tutorial for the on-map exploration side of the game, too.

Graphical Updates Let You Tune In to Inner Feelings

There’ll be more portraits. Now people can express themselves in ways other than text. It’s a small thing, but we both feel it adds a lot.

That’s the gist of it. Happy Halloween!

Close
11/01/2015 02:31 AM
Awesome! Hate me for I haven't played this (or anything other than the brain dead ARAM league of legends matches) since the igmc, but I was cheering for FS as it seems fresh, effortful, beautiful and interesting!

About the undertale-ish battle pre skit, I'm totally happy with it! However if you hadn't mentioned you got it inspired from undertale, I'd have assumed you drew inspiration from Wine & Roses! XD
PentagonBuddy

Totally understandable ah-hahahah! If you haven't played yet, you might be better off waiting for the contest version+.

Wine & Roses did that too, that's right... well it's a good idea! And it adds so much charm.
Ronove

Close
11/01/2015 02:52 AM
I'm glad you guys took home the engine prize for RPG Maker! :D Congratz!! For a second I thought the After also included all the sparkles. I'm sad no sparkles (I'm kidding! unless you wanna add sparkles...) but I think the slight change in portraits will help out to keep things fresh!
Sooz

But do you really want that?

YES. I WANT TO SHOW EVERY ITEM TO EVERY CHARACTER.

TELL ME YOUR OPINIONS ON THIS BALL OF LINT, SIR OR MADAM. DO IT.
nhubi

author=Ronove
I'm glad you guys took home the engine prize for RPG Maker! :D Congratz!! For a second I thought the After also included all the sparkles. I'm sad no sparkles (I'm kidding! unless you wanna add sparkles...) but I think the slight change in portraits will help out to keep things fresh!


look if we add shoujo overlays for every line of dialogue, eventually we'll get to the part where Koz comes out as a ghost eating monster and we get this image i fondly call "louis vision"
(warning for purple blood)
Show 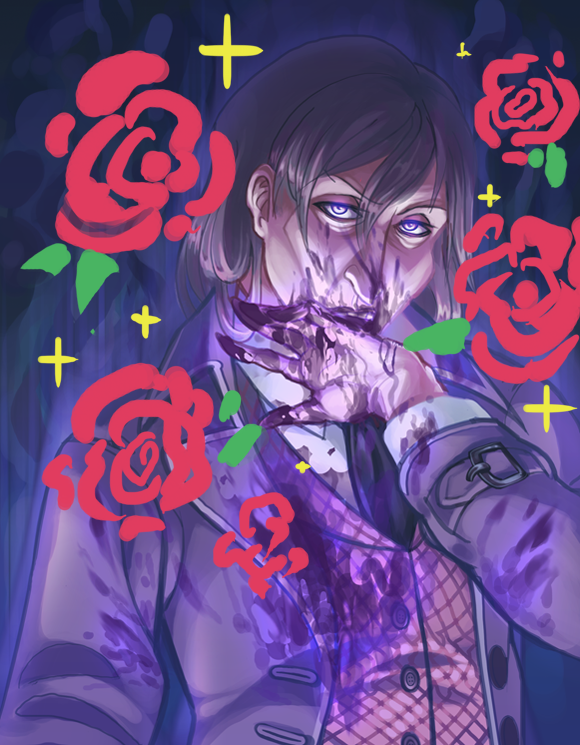 IN ALL SERIOUSNESS THO: thanks everyone for all the support 'n stuff ;___; It means a lot! I hope you all stick around for the ~polishing up~ we do, since aw jeez am I ever excited about it, and do I ever wanna holler about it with people. >W>
CashmereCat

Also... how do you pronounce emmych? Is it "emmik" or "emmike" or "emmy c.h." or something radically different?

Also... hooray for the success! You get the money! (Which is well deserved.)
emmych

Close
11/01/2015 07:05 AM
It's all overlap! Penta did most of the art for this go around and I did most of the writing, then we split programming stuff in (penta handling battles and me doing most of the field stuff, iirc). We have a lot of skill overlap, so EH it made sense to both do what we had time for.

And it's kinda like "emmish"! It's an amalgam of a nickname i don't use anymore and my middle name.

You showed how to kick that butt. Take those names.

Looking forward to playing the expanded version at a later date! Keep doing what you're doing.
Hasvers

@Hasvers: HEEHEE I'M GLAD YOU LIKE HER. <333333 she's just awful and penta did such a good job drawing her stinky face and huff huff huff i continue to be excited about these goofy characters ;___;
Sooz

Close
11/02/2015 10:44 PM
Like I still don't get what's supposed to be so awful about Kozmin she seems like just a stick in the mud that shoots and eats ghosty-goos and they're already dead.
emmych

Close
11/02/2015 10:49 PM
Right???? And i mean it's not like she ruins her sister's life by being a Judgey Jason about her friendships and stops her from smooching ghosts JEEZ

author=emmych
Right???? And i mean it's not like she ruins her sister's life by being a Judgey Jason about her friendships and stops her from smooching ghosts JEEZ IT'S ME I AM THE GRUMPY STICK IN THE MUD
emmych

Close
11/02/2015 11:19 PM
@unity: LANA WOULD AND SHE COULD
idk if you ever got a game over during Rex's segment? But yeah the game over there is "Kozmin retires and Lana starts dating a ghost"

author=emmych
@unity: LANA WOULD AND SHE COULD
idk if you ever got a game over during Rex's segment? But yeah the game over there is "Kozmin retires and Lana starts dating a ghost"

LOOKS LIKE I NEED TO GO BACK AND PLAY AGAIN TO SEE THAT :DDDDD
PentagonBuddy

yes there's unique game overs (alright beckett and dahlia have the same game over text but theoretically no one is seeing a game over for both of them...i hope...)

Honestly the Rex one is like, "was this REALLY that bad?" but it does mean the end of a ghost busting career, so alright
Pages: first 12 next last