Story: You play as Lana and Nadia Kozmin a sister act of ghost hunters in 1920s New York. Their job is to is to make sure the spirits of the dead find rest in the hereafter. Ghosts and accepting death aren't the only things this story has to offer. As they help ghosts come to grips with their afterlife, Lana and Kozmin (as Nadia prefers to be called) also come to grips with their own relationship. Even Lana, who seems to fully accept who she is, has a bit of soul searching to do, and the dead aren't the only souls these two are searching for. Learning to accept themselves for who they are means accepting each other. That's not so easy to do considering they've become somewhat alienated from each other over the years and have only recently reunited. For Kozmin, this also means accepting Lana's friends at the Cat's Meow, who she initially doesn't approve of. The Cat's Meow isn't just a club; thanks to Lana's friendship with the staff, it becomes their base of operations. 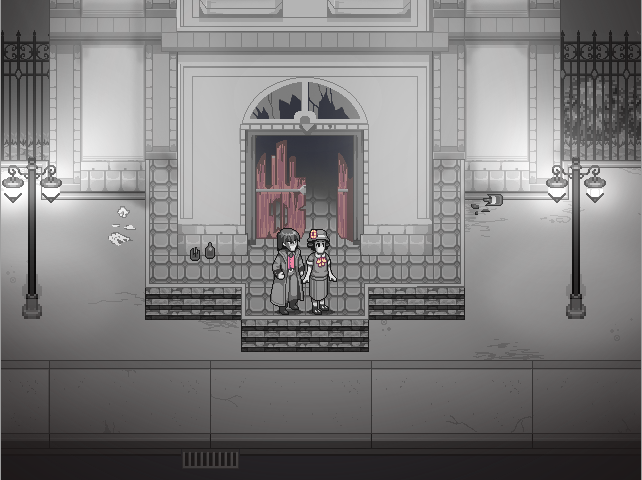 And what better place for soul searching than church?


Writing: Simply magnificent. In this whole game, I don't think I have single negative thing to say. First, character development: Absolutely beautiful. A character doesn't work unless he or she changes. Nadia Kozmin will draw any skilled writer's attention as a character that is brilliantly developed. She starts out coming off as a grumpy, irascible stick-in-the-mud, progresses into a sister that's trying really hard to make a relationship work, and ends up becoming one of the most sympathetic characters in the game. The writer has a genuine gift for understanding the soul of his or her characters, and showing us who each of these people really are through the course of narrative. There are a number of characters you start of not liking, and you end up falling in love with every one of them.

Next is the details: Our players have different accents and vernaculars. Lana, though as Russian as her sister, has been completely Americanized, and is quite the socialite, using awkward 20s slang, right down to the "golly-gee's" and "wowie's". Kozmin, on the other hand, is a brooding wallflower, who doesn't interact with others, and at least pretends to not want to interact with others. While Lana sounds right at home in a Depression Era speakeasy, Kozmin is as foreign as they come, struggling with words and truly acting out of place. So often, writers lose track of their characters and normalize their voices in writing, forgetting that these people are supposed to have accents. The writer's attention to detail in this game is simply the bee's knees. Lana never stops sounding like a 20s socialite, and Kozmin never stops sounding Russian. The localized vernacular never shifts. All of these people sound like they come from the same world and most importantly, the details never get lost.

I could write a whole article what was right with the game's writing. The characters never broke character. The plot never got dull. The story never lost its pace. It never stopped playing with your emotions.

Gameplay: Our devs, with the help of some scripts, have subverted the combat engine and turned it into negotiation system where instead of fighting spirits, you convince them that they've died and need to move on. This is done using artifacts such as newspaper obituaries, photographs, record albums, flowers, and such. Also, certain baked goods can greatly assist your efforts at convincing the spirits of the dead to move on. Not only do you have to make sure the ghost learns the truth, you also have to make sure it's in a fit emotional state to process this information (I really love this feature). For example, if a ghost becomes angry, he may begin ignoring you, or if a ghost becomes sad, he may not think what you're saying matters. Even better, it isn't just the ghosts. You're susceptible to becoming emotionally impaired also. This is a time when your player characters will make bad choices, or even won't respond to commands. If a spirit, or an ally, is angry, you may be able to use an item or a baked good to calm or comfort, but often, you'll have to say the right thing to mollify the spirit, or ally. Everyone has aura's and what mood he or she is in depends on the color of his or her aura. Don't think you can just go on forever. You have WP you have to keep an eye on. If it gets too low, well, you can't really do much of anything. All in all, a very engaging system with a lovely wealth of storytelling. Okay, I do have one negative thing to say, and it feels like such a nitpick, I'm almost embarrassed to mention it. I think the one issue here is that it's possible to find yourself at the point in a conversation where it seems like you and the ghost are arguing in circles, and this can get a little frustrating at times, and really cause an encounter to drag out, as you may end up with a ghost constantly flip-flopping from angry to sad and back with seemingly no middle room, but be patient. It's merely a matter of finding the right combination of words, bread, and artifacts, and in a couple of cases, you may have to abandon the encounter to find more items to use later. Difficult to handle mood swings are especially true for Magician. 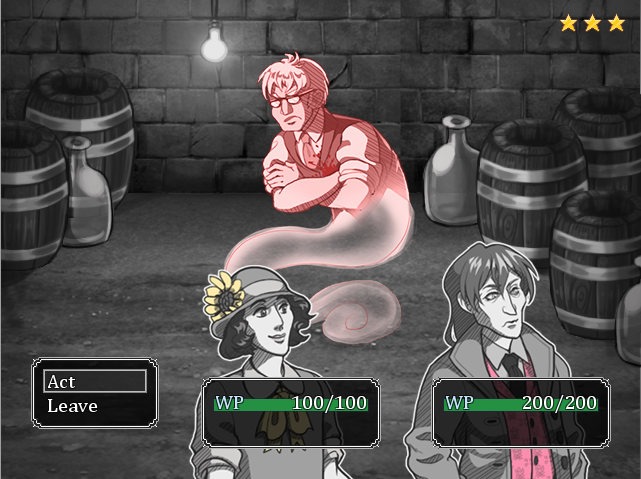 Of course, shooting a ghost is bound to make it angry...


Graphics: Very lovely graphics with what appear to be all custom sets. Mostly black and white, helping to set the atmosphere for a 1920s, almost noir style of comedy ghost story, yet certain various objects are in color. I particularly love the expressive portraits used for the character images. The characters are drawn in a caricature style; expressive faces with certain overexaggerated features that help to distinguish them from one another. I don't think there's another video game with an art style quite like it, and it really stands apart from other games. 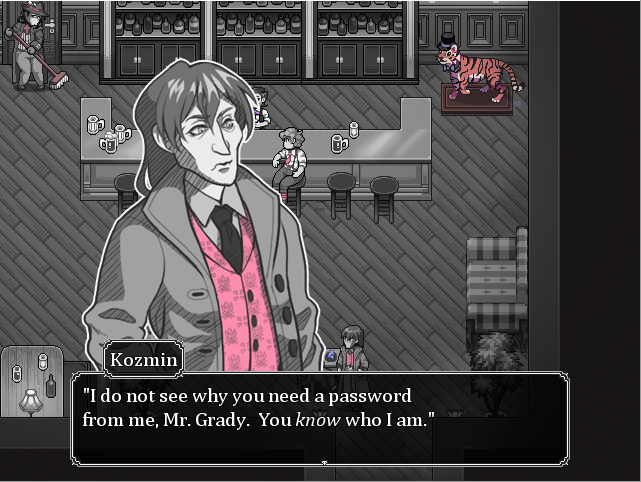 That's a tiger wearing a top hat! Can I have one?


Music: The credits aren't clear on whether the music is custom, purchased from other channels, or whatnot, but it is a wonderful rag style that seems to fit the game perfectly. The sound of this game really puts you in the 20s.

Conclusion: From the gameplay, to the sound, the look, this game wins on every level. I can't recommend it enough. It's whimsical, slightly satirical, but it is an experience that is wholely worthwhile. This is a game worth paying for. In fact, I'd say, if there was a list for games that an indie gamer must play before dying, this game would be on it.

author=pianotm
The writer has a genuine gift for understanding the soul of his or her characters, and showing us who each of these people really are through the course of narrative.

Such high praise! Em did most of the writing and I just plugged in some gaps here and there. They go by "they" rather than he or she in this case as well.

After death can work too in this case.

The music comes from incompetech; it's Kevin macleod's stuff, like any project with a deadline.
emmych

Thanks a million for your kind words, it's truly appreciated! It certainly perked up my mood today ;w;
Pages: 1