The game aims to be Esoteric, but the demo's eclectic...

This game is currently in an alpha state. As the game is not complete, this review is written with that in mind and as such will not be rated.

Story: You play as Shift, a young man experimented on by a mysterious corporation. While experimented on, Shift is stuck in a dream state where he has to find the missing pieces of his memory. As for the rest of it... 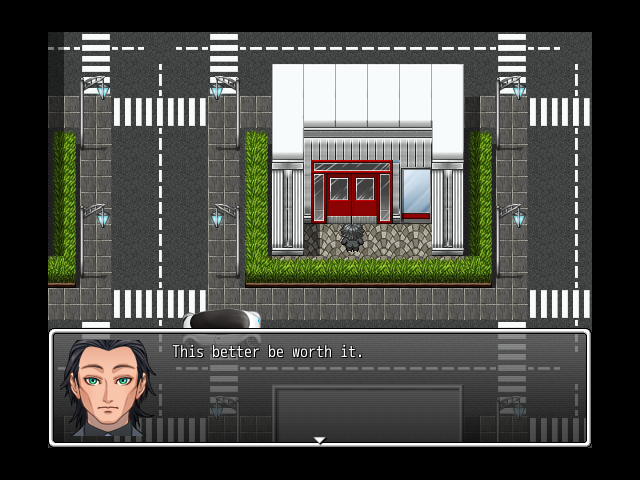 Comment I made while downloading finds its way into the game.


Writing: What you will witness in this game is nonsense. No, not stupid writing. The actual art of nonsense. A fine example of nonsense is Alice's Adventures in Wonderland by Lewis Caroll. This game has the potential to be fine nonsense, but in it's current demo state, it is not. The problem isn't in the writing, however. It's in the pacing of the gameplay. The story, as with any absurdia, is woven into the disparate pieces. The nonsense is not without logic. You can find your way well enough and figure out what you're supposed to do.

Gameplay: Unfortunately, a big, sprawling world where everyone speaks in metaphors, nonsense, and plain insanity can get tedious if there isn't enough of a sense of accomplishment. I can get several companions, but I can only fuse with one of them. I have only found piece of memory and one key to get me around. This would be fine...if I were only confined to the town and one portion of the world map. I'm not. There's enough for me to literally wander for hours, and I did.

Battles have not been balanced and as yet are totally pointless. About the only things you really stand a chance against are the slimes. You can grind and buy a house, but that will take time, and I'm not going just kill slimes all day. Among the interesting things the gameplay offers, is there is a Galaga type top down shooter you can play if you find a computer south of the main town that you start in. This game is good. 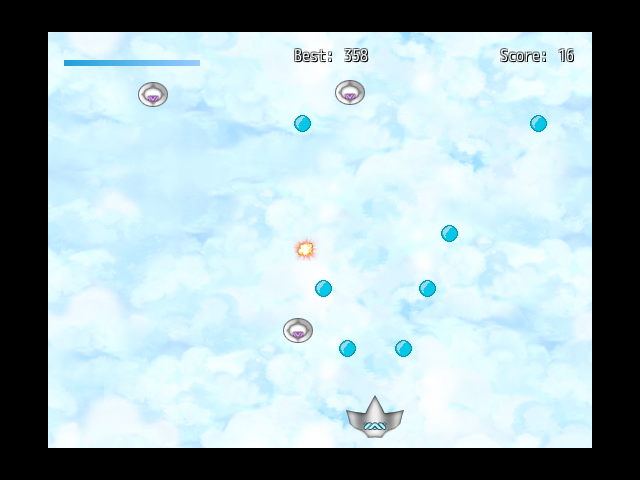 Am I a bad person for wanting to play this instead? 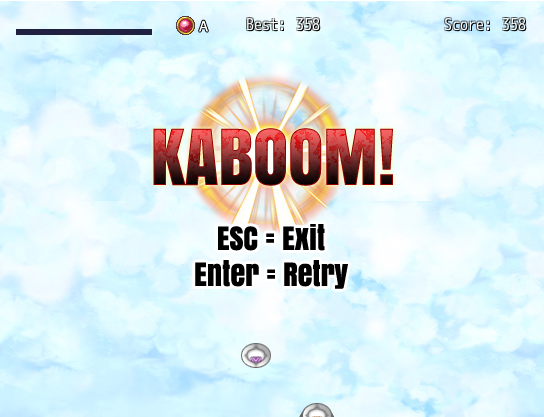 So come on! What's everyone's high score? Let me know in the comments!


The shooter game is a lot of fun. Control is an exact Galaga clone. You can move the ship from left to right, and shoot. That's it. You can't move forward or backward. The shooting...isn't one square at a time! You can't hold enter to shoot, but you can certainly shoot as fast as you can press it. There are also powerups that let you increase shooting to multiple bullet streams so that you can more easily hit multiple enemies. I was able to make it to three types enemies: the circle thing you start out with that blows up in one hit, a larger version that takes several shots to take out and a triangular type of again, the same type of enemy. Powerups I was able to get include life restore, which if your life is already full, becomes a shield, weapon upgrade from standard fire to blue energy ball, multiple streams--I had three streams going at one point--and a red orb that I'm not sure what it does. The game doesn't have stages. It merely increases enemies gradually until you're facing a bullet hell wall. Your life bar lets you take several hits before dying. For a fun quick shooter, this is a really good one and is worth finding in Esoteric.

Unfortunately, the main game, in its current state, isn't nearly as exciting and that's squarely on the gameplay. I'm willing to give it a pass because it's a demo, it's not ready, and it really looks like combat was simply thrown in because it wasn't clear what should be really be done to make this game. Still, huge maps with not a lot of people, most of them do nothing, and it's not entirely clear how to progress. This shouldn't have been released as a demo. In it's current state, it should really be a closed alpha.

Oh, your areas aren't quite closed off right... 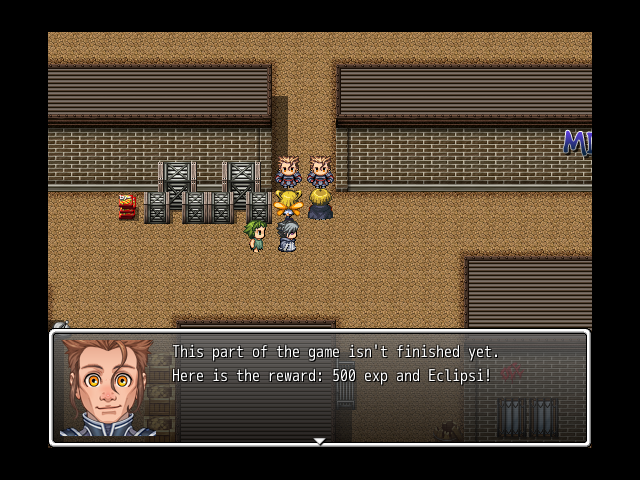 Wait, what? Bro, I just came from that way!


Graphics: Except for the opening, which is a modern tile, all RTP, and using the really bland looking generated facechips. They fit though. While some of them are indeed bland, there are characters in the game that their faces just look super creepy and it really has a desirable effect on the game. Also, dev desperately needs to employ shift mapping in this game.

Sound: The music is...fitting. It's maddening. It's...unique. There's one song where this fellow is singing about "whispers", and there's a brief moment where he stops singing, and when he starts again, there's this awful echo. When it cleared up it very distinctly sounded like: dude just took a drink of water while recording and wasn't quite facing his mic when he started singing again. I actually sat and listened to this bizarre thing all the through again just to make sure I didn't mishear. That is exactly what it sounds like. 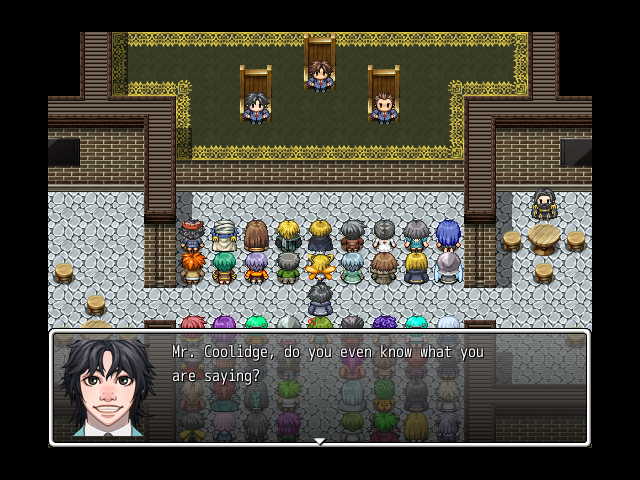 That fruit's hanging too low even for me.


Conclusion: So if you decide to give this game a try, let me tell you where you find that top down shooter. Leave the house you start in and go to the town exit to the south. Just go straight south, avoiding the slimes (it's easy) until you can't go south anymore. There's two buildings. Go into the one on the right and the first thing you'll see are vending machines. The computer on the right of them lets you play the game. Don't go up the stairs until you're ready because you'll get yourself caught in a loop of changing rooms and it will take several times to find your way back to the foyer. Anyway, if I were rating this game in it's current state, I'd give it two stars.

Close
01/31/2019 06:26 PM
The shooter game was actually made by Galv. It's Galv's Invader Mini Game and it seems like it's just copied and pasted into this game without changing anything.
pianotm

Tw0Face
The shooter game was actually made by Galv. It's Galv's Invader Mini Game and it seems like it's just copied and pasted into this game without changing anything.

Let that be a lesson, kids! If you want someone to enjoy your game, don't give them the option of playing someone else's game!
volke_locke

author=pianotm
This game has the potential to be fine nonsense...

Thank you for the review. You've made me very happy by seeing potential in the writing. If I could live a second life, maybe I could bring this out of alpha into something truly worthwhile, but I know I'll never be able to. This game is my baby, but he's a miscarriage. Loved all the same.
volke_locke

Close
05/02/2020 03:56 AM
I would love to revive this project... get the mapping made better (only the government area should be bland), get the journal hashed out, balance the battles, and clarify the actual functions of how to play... it's too big for me, and that is why it failed.
Pages: 1