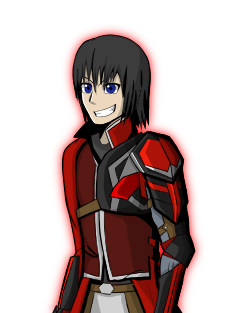 The Vanguard of Ruin

Ostracized from the rest of Asala because his father assassinated the king's only son, Aeyr harbors cold and bitter contempt for the people around him under the guise of casual indifference. Despite his attitude, the precious few that somehow manage to earn his trust will find Aeyr to be an unwavering ally and steadfast friend, as evidenced by his relationship with Mia. Unfortunately, it is that strong trust that leads to events that name him as the Vanguard of Ruin, the title given by the Last Prophecy to the one destined to destroy the world.

Once he steps into prophecy and becomes a Revenant, Aeyr is capable of draining the Soulfire from living creatures. He can then use the Soulfire to heal an ally, damage an enemy, or form into a second weapon to change his fighting style. This gives Aeyr a wide variety of options in combat. 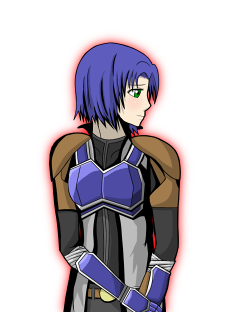 A timid young woman who somehow managed to be Aeyr's only friend. Despite being a natural pacifist, personal necessities demanded that she join the Asalan Knights. Despite her normally weak will, Mia is fiercely loyal to Aeyr and will always step in to defend him whenever she can, showing a strong trust whose origins are known only to them.

Mia fights by switching between sheathed and drawn sword stances, each with their own advantages and disadvantages. While in sheathed stance, Mia can buff herself and stagger/debuff enemies. After drawing her sword, Mia goes into an all out offense to inflict high damage and injuries. 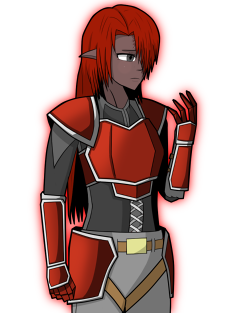 The calm and reticent Amalie is an enigma among the residents of Asala. Not only is she the only Manna accepted into the Asalan Knights, but she was given the prestigious rank of Paladin by Commandant Vanessa, a woman well known for her hatred of Amalie's kind. A Manna is known to have glowing red eyes, yet Amalie's are cold and lifeless. What secrets does she hide from everyone?

While weak in direct physical combat, Amalie has adopted a more defensive fighting style. She can, among other actions, draw aggression away from vulnerable allies, pacify those afflicted with emotional ailments, and turn the tide of battle by converting stat penalties into bonuses. 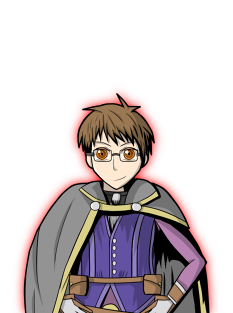 The Mask of Solidarity

Cheerful and optimistic, Luke will always be the first one to smile whenever the situation seems grim. He believes in the innate good in people, a trait that often leads him into trouble. Despite his positive outlook, the glow in his eyes betray a dark past: At some point in his life, Luke became an Infused, a human with a magical Relic implanted in his body to gain arcane powers. Luke seems to be on the run from Asala, and immediately cowers in fear at the sight on an Asalan Knight.

Luke is physically weak, but his extreme intellect more than makes up for it. His implanted Relic gives him the power to command powerful offensive magic as stat debuffs. In addition, he is able to equip side packs that allow him to quickly assemble makeshift offensive and defensive items during battle. 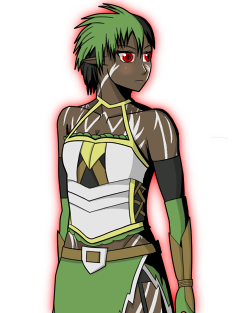 Growing up in the midst of the lethal Deep Fog, Trill has only known the Manna in her clan all her life. Not wanting to be seen as weak by the other humans, Trill uses a shield of confidence and mockery to hide her curiosity and anxiety. She does not understand the language of humans very well, and so struggles with effective verbal communication.

Unlike Amalie, Trill is in full control of her powers as a Manna. Able to enter a state of trance which lets her reach out with her mind to connect with the world around her, Trill can use a variety of supportive powers depending on her current location. Physically, Trill specializing in multiple strikes rather than raw power, which makes her a devastating threat against weakened foes. 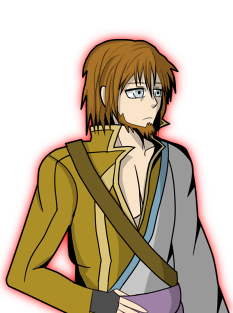 The Protector of the Undeserving

A laid back and friendly mercenary-turned-bodyguard to Serra Cadmus, Reyson always resists any kind of manual labor order he is issued by his charge. Despite his constant complaining, his loyalty is unquestionable, and he shows no mercy to anyone who dares try to harm the one he swore to protect.

Years of experiences traveling the world has given Reyson extreme proficiency in multiple fighting styles. He can not only pick up and use any weapon he can get his hands on, but can wield two of them at once. This gives Reyson unparalleled versatility in his fighting style. However, being a jack of all trades means he has no real unique abilities, and so cannot use any Burst Drives.

Not by himself, at least. 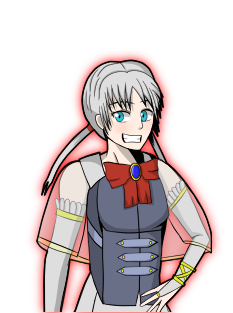 Years ago, when the Fog first emerged, all of Vergio's Oracles had lost their power of prophecy and foresight. However, for some reason, one Oracle suddenly regained those powers: Serra Cadmus. Believing herself to be a "chosen one" of sorts, Serra has gained a rather boastful and pompus attitude, to the dismay of Reyson, her retainer sworn to follow her every order. Underneath all that, however, Serra retains an honest, caring heart, and is totally committed to helping those wherever and whenever she can.

Serra has no combat training whatsoever. Instead, when it's time to fight, Serra stays close to Reyson and uses her powers as an Oracle to predict the future, providing him with her Burst Drives. Despite her powers returning, they are unstable, and sometimes her looks into the future will provide no benefits. Oracles are meant to be the messengers of the divine, so are these unstable powers an omen of what's to come?

Huh, Luke's only 16? Given how big a deal Aeyr made of it, I assumed he was much younger, like 13 or something. It seems a bit ironic for a 19yo to make a production of how someone only 3 years younger than him is a delicate baby in need of protection.

It's neat that everyone gets a spiffy High Fantasy title, not just Aeyr. Are there other prophecies that reference them, or is this just a meta thing?

He can then use the Soulfire to heal an ally

That's very interesting, since you seemed very insistent on a design philosophy of no healing spells in Soul Sunder and the prologue here. Initially I assumed Aeyr's abilities at the end of the prologue were temporary, like Arya's at the end of the childhood arc. I presume his enemies will be more difficult to compensate.
Malandy
209

Mia could be a type of martyr that doesn't die? ... If the dream is true, she'll end up fighting Aeyr at some point, and so have to survive until then...

Maybe a martyr for Honelleth??
argh
668

Mia could be a type of martyr that doesn't die?

Does such a thing exist? The dictionary definition says they're someone who dies for their beliefs.
Malandy
209

Mia could be a type of martyr that doesn't die?

Does such a thing exist? The dictionary definition says they're someone who dies for their beliefs.

author=TvTropes
A martyr (from Greek word mártys, "witness") is a person who is suffering (or has suffered) persecution for their beliefs, and has inspired other people through their behaviour. The most frequent assumption in popular culture, is that the martyr has died because of their belief in their cause.

It isn't a requirement to die, although the term "living witness" may be used instead of Martyr, in that case.

(You've got a few typos here, do you want a PM listing them?)

Sure, if you don't mind.

Huh, Luke's only 16? Given how big a deal Aeyr made of it, I assumed he was much younger, like 13 or something. It seems a bit ironic for a 19yo to make a production of how someone only 3 years younger than him is a delicate baby in need of protection.

It's neat that everyone gets a spiffy High Fantasy title, not just Aeyr. Are there other prophecies that reference them, or is this just a meta thing?

I think I'll keep that under wraps for now ;)

Correct. Aeyr's sections are going to be much more focused on combat than Mia's will be.
Red_Nova