Amputation is the Best Medicine

I don't think it's an exaggeration to say that I've had more fun working on Prayer of the Faithless this last month than I have since the year began. The cutting and streamlining process forced many components of the game to snap into place, and I've been able to put a bow on some some design choices that I've been on the fence about for months, if not YEARS.

It's been rightfully pointed out to me that this is not the first time I've made serious changes to the characters and enemies, and I need to bring this vicious cycle to an end once and for all. To that end, I've tested all of my changes on enemies in chapter 1 and chapter 5 to get a sense of how well these new mechanics scale over the course of the game. Only when I'm satisfied testing on both early and late game enemies will I update the rest of the game's enemies with the change. I can say with certainty that whatever changes I make here will NOT have to be reworked again. If I ever have to rework the game to this level again, I will eat my own socks. 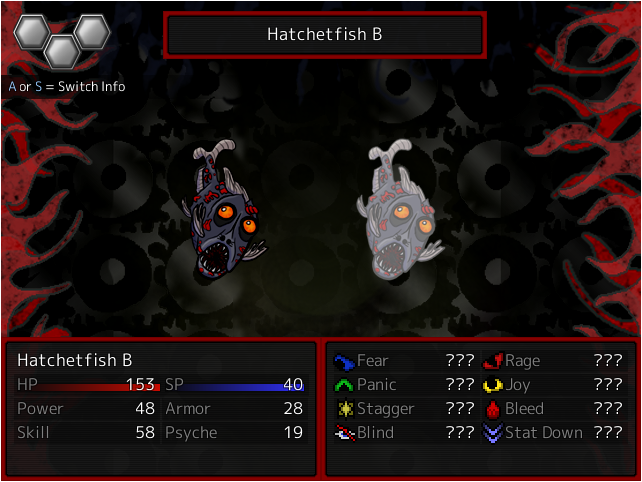 Inspired by the tense feeling I wanted to invoke in players meeting a new enemy, I've been playing around with hiding enemy elemental and state resistances and requiring players to attempt to hit enemies with them in order to find out what they are. You'll still be able to see their stats, but everything else will have to be found out by actually fighting them.

I understand that, for many players, this can be seen as arbitrarily adding an extra step to an already difficult game. However, please consider the following: If you have access to ALL the information about an enemy, there's a good change that you will start to formulate a strategy to take them down before even understanding what the enemy is capable of. Being blindsided by a new ability that you didn't take into account isn't ideal for what I want to put players through. Instead, I want them to start off slowly, prepare their party for any scenario, and be able to adapt to whatever the enemies throw at you.

Enemy count for troops have been reduced significantly. Outside of special battles like Black Spouts or bosses, you should expect to fight about 1-3 enemies per troop (and fighting 3 at once is a rarity outside of the aforementioned Black Spout and boss fight). This gives me the freedom to give each enemy more depth, such as using a specific debilitating move at the start of the fight, and some will react to being hit with specific states or when they are the last enemy left in a troop.

If you've played the demo, you may have noticed the state list is slightly different now. The biggest change is that limb injuries that block different ability types do not exist anymore. Not to say that they are gone completely, though! In fact, the effects themselves have been absorbed into specific emotional ailments. I did this because I wanted to place more emphasis on emotional ailments with this new system. Not only because fewer states are easier for me to manage, but because emotional ailments now tie into the story quite a bit more. In the interest of avoiding spoilers, that's all I'll say about it for now. 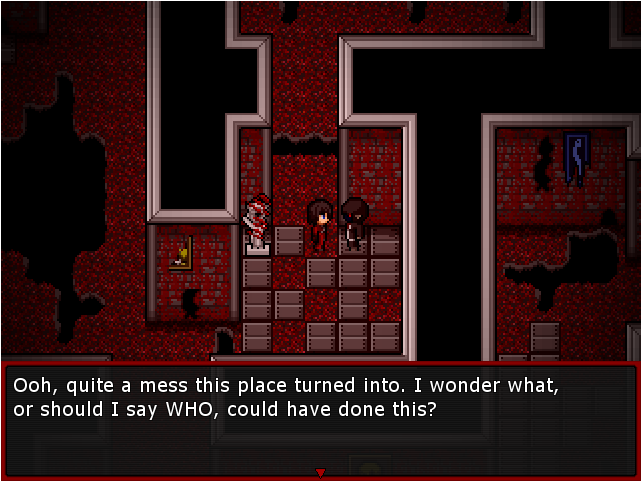 So... the Merchant was another component of the game I was seriously debating on cutting completely. The Merchant was originally designed as a way to load up on healing supplies as well as provide an alternative way to get Black Spout weapons players found to be too difficult to get. However, I didn't want to encourage players to grind the same spot to save up cash to buy out the Merchant's inventory. Now, their role has been downplayed to provide players a pit stop to restock on items while they continue their journey and NOT as an excuse to stop forward progress and grind to buy out their entire inventory. If I decide later that the Merchant should also sell Black Spout weapons, they will NOT be sold in the same chapter as that Black Spout appears.

In addition, the Merchant's inventory is going to be different for each campaign. For example: since Aeyr's party has healing abilities, the Merchant will not sell healing items to him. Instead, the Merchant will sell certain attack items that Mia's party would not be able to get.


There are a lot of other changes as well, but I hope these two should give you an idea of the new goals of the game. Of course, I'll still happily listen to any feedback you may have about these ideas. If I decide to walk back some of these design choices, I've balanced the rest of the game so as not to be greatly impacted by such changes.


As of this writing, I have enacted these changes across the entire game, meaning that all allies,enemies, and components have been given this new treatment. From here, making adjustments is as simple as raising/lowering enemy levels and updating a handful of common events. For the first time in a long while, I get home from work and think, "Alright! Time to get some work done on PotF!"

I have absolutely no regrets about the decision to rework this game. Thank you so much for your patience with my shenanigans.

Close
09/03/2019 11:11 AM
Loving the fact that you're loving making this. It sounds like your rework has had some considerable thought put into it, changing mechanics around to suit your liking, and generally finding that sweet spot that you might not have found had you not rested. This is one proud cat.

I like your change to hide the enemy weaknesses/resistances until they are revealed by attacks in battle. That seems closer in emulating how one would actually go about fighting an actual monster - test a few moves out, see what works, drop what doesn't, and continue with what does, based on that feedback.

Keep up the good work!
Red_Nova

I'm glad you like it, Cash! Yes, taking a rest was by far the best decision I had ever made regarding this game.
Pages: 1