So I bought a Switch the other day with Fire Emblem Three Houses as my first game. I'm pretty excited to see what I've been missing all this time. HOWEVER, I will not be opening it up for a while, at least for the whole month of December. Not only will this be a Christmas present for myself, but one I will hold over my head until I achieve a certain milestone with Prayer of the Faithless.

First step towards that milestone: Figuring out what that milestone is. Should it be when I send the last build to playtesters? When I finish my own testing? Or sometime before then? I'll know it when I reach it, so I just gotta keep working.

I mentioned this in an earlier blog, but I made the choice to leave all visual/battle polish to the side in favor of events and cutscenes to get the alpha phase completed. With that done, it's time to go back and spit shine as many rough patches as I can. To that end, I'm doing a sort of "Death March" run through the game, where I play through the whole thing and stop only to fix issues that greatly detract from the feel that I'm going for. In the spirit of the Death March title, any non-critical issue that would take over a day's worth of work to fix will be left to the mercy of any playtester who considers it a serious issue (apologies in advance, playtesters!). 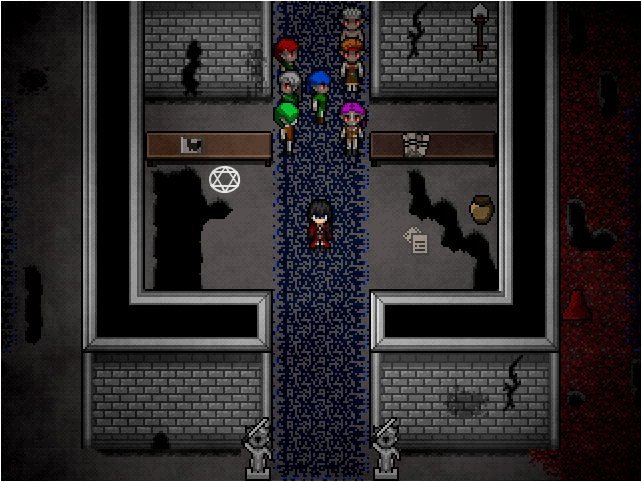 Reworking the shading for some of the tiles I made years ago with a style I should have done a looong time ago: Stuff you can walk over, like the scattered papers, no longer has a hard black outline. 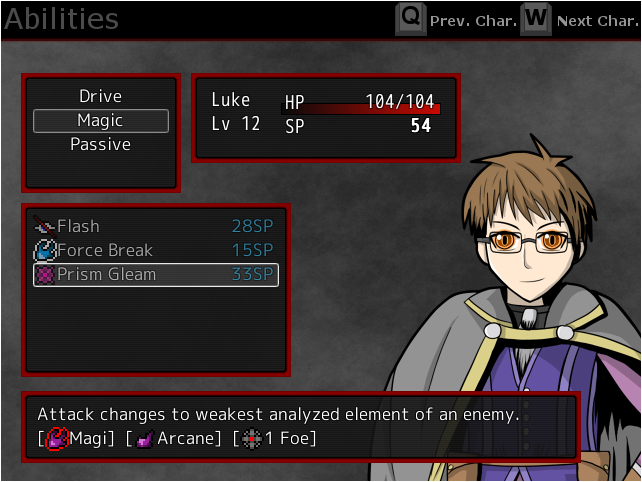 Thanks to the cutting of various item and skill types, the tool sets of party members needed an update. Luke, for example, is now geared more opening up enemy defenses. Since weaknesses/resistances are now hidden and require the player to use various elemental attacks before they are known, the process of finding these weaknesses shouldn't be tedious. To facilitate this process, Luke has skills that fire off random elements, flip buffs and debuffs, and other such abilities that I'll leave unspoiled for now. Suffice to say that most of the party members got a similar treatment to help accent individual personality traits and roles in battle. 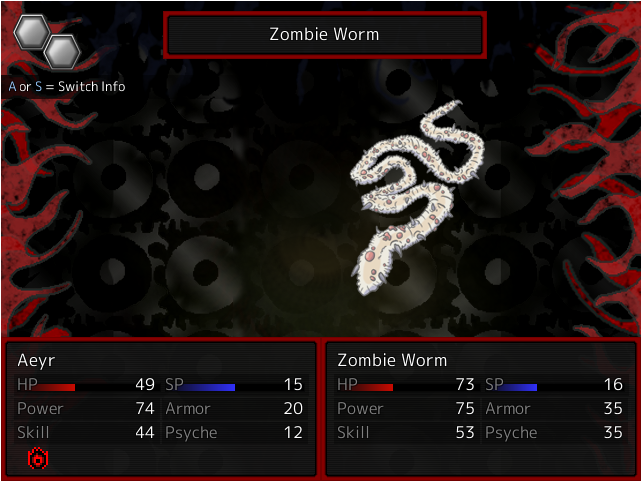 And you will need them, because common enemies are objectively stronger than you. I played pretty poorly just to get this screenshot, but these guys are quite beatable!

That's all for this update! 2019 threw a lot of crap at me that made me want to give up more than once, so while I couldn't complete the whole game like I said I would back in January, I was able to finish the alpha. So if you want to be technical, I did finish the game.

And I'll take technically correct over anxiety attacks any day of the week!

Close
12/01/2019 05:52 PM
I remember you posting early screenshots in the survival. This has been a longer journey than many games taking over a decade to finish imo. So, congrats on finishing the alpha! And I wish you a smooth rest of the journey.
Red_Nova

Close
12/07/2019 05:06 PM
Congrats on technically finishing the game! :D This is a huge step forward and I can't wait to see the final game hit the world, no matter when that ends up being!

These ideas seem really interesting, too! I can't wait to see how you've transformed the mechanics to better fit the game.
Red_Nova

author=unity
Congrats on technically finishing the game! :D This is a huge step forward and I can't wait to see the final game hit the world, no matter when that ends up being!

These ideas seem really interesting, too! I can't wait to see how you've transformed the mechanics to better fit the game.

Thanks! I'm excited about these changes, and it's really hard to decide what to talk about and what to leave for players to discover.
unity

Close
12/08/2019 11:25 PM
Yeah, I know that problem XD There are so many screenshots I want to share but can't because they have spoilers in them.
Marrend

Guardian of the Description Thread
19694

Close
12/09/2019 12:24 AM
I kinda missed out on the last round of playtesting last time. Too busy with other things. Lots of things have changed since last I tested, so, I'm interested to experience all the changes this has undergone since last I was able to test. Either as a tester, or with everybody else after release.

*Edit: This is, by no means, not a call for getting this done sooner! Take your time, and don't exhaust yourself!
Pages: 1