A Thousand Ways to Die

Since Prayer of the Faithless has a more free-form battle system that allows you to distribute turns among your party, special care needed to be taken to ensure that no one single action overshadows the others. As I progress through the death march, I do the best I can to observe how I act as a player and catch certain behaviors that I don't want to encourage. For example, if I notice that I'm mashing attack for more than three consecutive rounds, then I make the necessary changes to encourage more variety of actions during a player's turn without requiring me to go back to the very beginning and test all over again.

A behavior I caught myself doing early on was, upon equipping a magical relic, I would almost exclusively use magic attacks for quick and easy victories. Because magic attacks ignore SP damage reduction and enemy Psyche stat was usually lower than Armor, that was always the ticket to doing big damage with little cost. I had thought that the massive SP cost was enough to discourage overuse of magic attacks, but apparently I was wrong. In a battle system that offers many solutions to the enemy problem, having one solution greatly overpower all others detracted from the idea of free form fighting.

Thankfully, though, the solution turned out to be a very quick and easy change: magic attacks will also be affected by enemy SP reduction. So, just like physical attacks, damage from a magical attack will be reduced by up to half the higher the target's stamina. 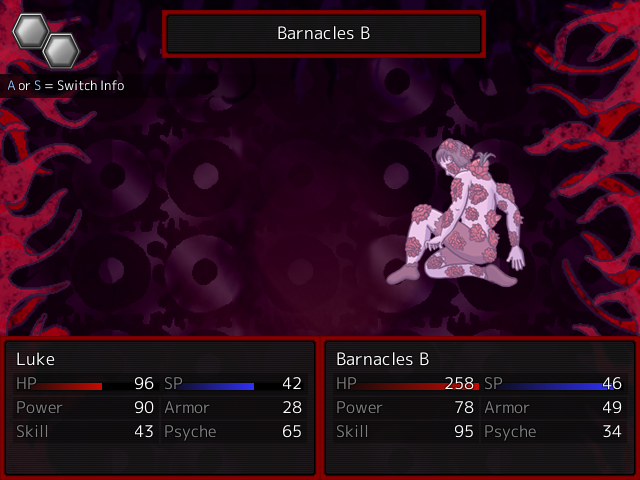 All it takes is a quick glance at the examine screen to see which defensive stat is lower, and you'll know whether to attack with physical or magical attacks


Sometimes, enemies will have the exact same Psyche and Armor stat. When fighting enemies like this, you are free to employ whatever measures you want to take them out.

Not only did this mean I was using every party member's skills more evenly, but there was also the extra bonus of making defensive options a bit more fair. For those that are not aware, you have some degree of control over which of your party members will be targeted by enemy attacks: Enemies are more likely to target the party member with the highest SP. If one of your allies is low on health and you have few healing items, then have that party member act enough times to reduce their SP, and enemies will likely target someone else.

It's not an absolute guarantee, and this tactic doesn't hold up if the enemy uses AOE attacks, but learning to control aggro is an important skill to learn in a game with limited health supplies. 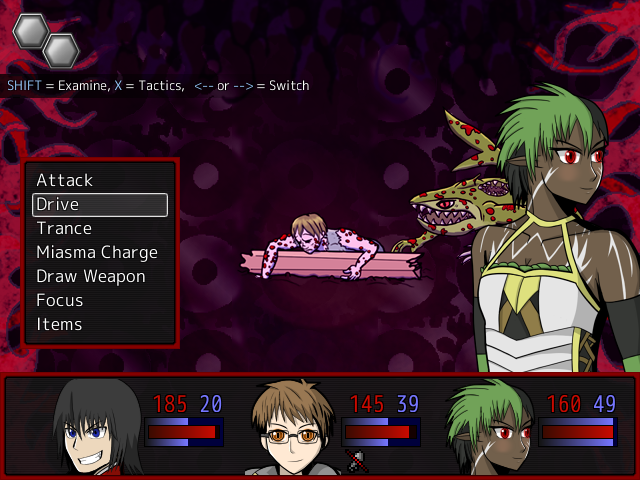 In this example, Trill will take most of the hits during the enemy's turn. Since her Skill stat is higher than Aeyr's and Luke's, attacks are more likely to graze her and inflict minimal damage. Of course, Aeyr has more Armor and HP, so maybe he'll be a better choice depending on the situation.


And that's all I have this month. Death march is coming along slowly because of real life, but I try to put in a little bit each day. As always, thanks so much for sticking with me throughout all these years of development!