Remember when I posted monthly updates on this game? Those were the days, huh?

Like many others, development slowed down when the pandemic hit back in February, but I also had the added weight of changing jobs and relocating to a place that almost immediately became the hottest hot spot for coronavirus in the entire state (which is in the top 5 for cases in the whole US). This is normally the kind of timing for a low budget dark sitcom, but here I am, trying to maintain my sanity while keeping myself from dying whenever I go out to get food.

Which, y'know, is a REALLY GREAT place to be in during the exhausting, soul-draining phase of polishing and testing a game about trying to maintain humanity at the end of the world.

But enough about me. Let's talk about PotF. Even though I haven't posted any updates about the game for a long time, that doesn't mean development stopped! I snuck in a few hours here and there whenever I could find the energy, but I had to adjust my approach thanks to the aforementioned events.

Remember back in December when I said I'd go through a final death march, fixing only the problems that would take less than a day's work to fix? Well, that's still kinda happening, but I didn't anticipate the sheer amount of items that needed fixing, so I was quickly overwhelmed about halfway through the death march. In order to keep my brain from frying while still making visible progress, I broke the death march down into two endeavors: A technical death march and an artistic death march.

The technical death march was where I would focus only on the gameplay side of PotF, including adjusting parameters, equipment and item stats and placement, ability, and enemy balance. This playthrough has been completed, and so the gameplay side of PotF is more or less locked down barring final tuning based on tester feedback. This is also why I haven't been posting screenshots lately. Pictures of code changes me slowly losing my soul debugging skill problems isn't exactly appealing to see.

The artistic playthrough is where I'll be focusing on anything and everything that doesn't have to do with gameplay. So writing, art, audio, etc. While there is still a lot of work to do here, it won't be as mind-numbing as before, so I anticipate I can burn through these tasks a bit quicker. I'll even be able to post some screens of finalized areas now! Isn't that great?

Anyway, I'll try to be more active from here one. I appreciate the patience, everyone! 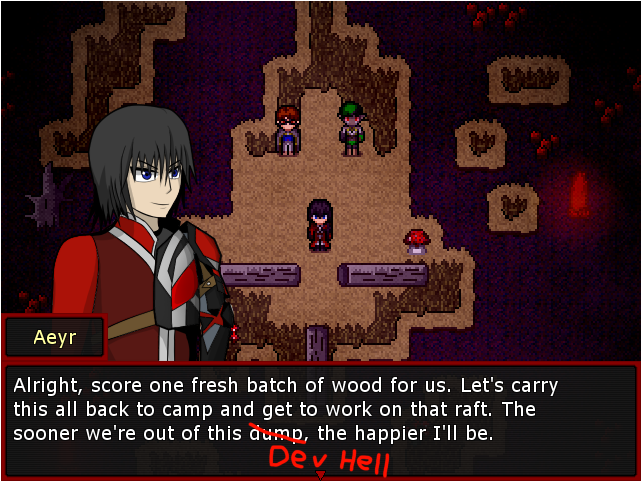 jokes aside, been a while since i checked on this game's progress. really cool to see it's getting real close to release. happy dev'ing
DungeonDevDude