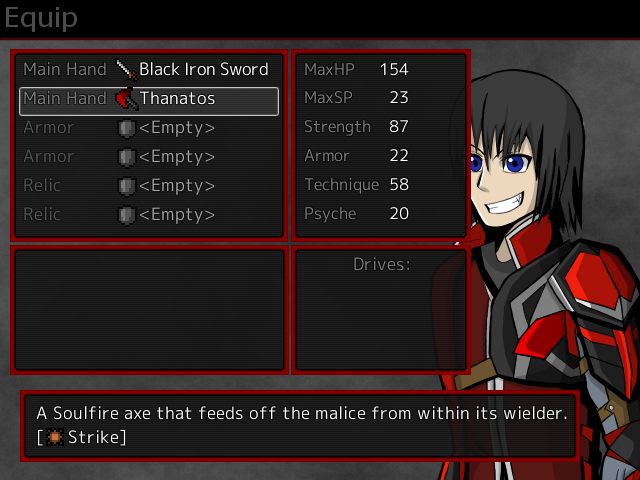 Originally, Soulfire weapons were offhand items posing as weapons. I'm pretty sure I coded in dual-wielding just before the public release. It certainly wasn't in the tester's demo, so maybe that's why it looks new. Either way, you were only able to form a weapon for one battle before Aeyr's prologue ended, so I felt it was worth sharing.

What IS new, without a doubt, is that I figured out how to lock in his Soulfire weapon to that you could change what's in his sword arm, where in the current release all of his equipment was completely locked down.
Malandy
209

How many different Soulfire weapons are there, and will we get the chance to pick which one we want for each boss via a large enough enemy selection? Or will it be locked in by having all the enemies of an area give the same weapon or something?
Red_Nova

Close
08/17/2016 12:26 AM
No, you can't keep Soulfire weapons outside of battle. This screenshot is what you see after choosing Draw Weapon. You can tell because there is no button prompts on the top right corner that lets you change characters unlike this menu here and the fact that his armor and Relic slots are greyed out.

While the exact amount of Soulfire weapons and weapon types are still being worked on, each enemy has only one particular weapon type (spear, axe, etc.) that Aeyr can form from.
Pages: 1