4 reviews
Beloved Rapture is a game that takes place amidst an epic conflict, though its heart is most deeply concerned with the intimate human relationships of its characters.

Personal and interpersonal stories take center stage. Characters challenge not only the next looming dungeon boss—but themselves, and their own demons.

Existentialism, spirituality, family trauma, LGBT themes, and friendship are all important elements of Beloved Rapture's story, and are treated with the reverence they are due. 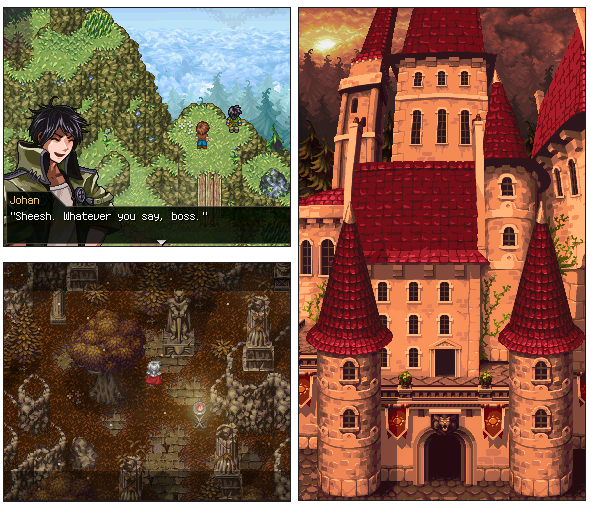 Johan, an introverted young man from the countryside, finds himself thrown into a conflict beyond his comprehension. The Aeons—an enigmatic religious faction—move ever-closer to his hometown.

Now faced with a threat to his once-elysian way of life, Johan must contemplate the role he is destined to play in their escalating conflict.

At his side are Aiden, the mysterious son of a Shrine caretaker, who has trained since childhood in the mystic arts; and Crystal, a runaway noblewoman intent on ending the war before it reaches her family.

Through their travels, Johan is intrigued by Aiden's increasing fascination with him, as well as the appearance of Draco, an Aeon soldier with a connection to his own mother.

I hope you've all been holding up well, and staying healthy during these long days.

One small silver lining to this past month's lockdown in the US: much more free time for development! I'd say we've hit a new stride, in fact.

Prior to Kickstarter, I worked on various cutscenes / dungeons that would span the entire game - in the hopes of showing off some visual diversity for the campaign (plus, testing out new resources).

This past month however, we've hunkered down and focused specifically on the game's prologue section, which spans the first 2 Hours of BR. I believe the Prologue can be a proper demo in its own right - which is my eventual aspiration for it. Ultimately, it'll include numerous exploration maps, battles, a village, a full dungeon, and plenty of whimsical exposition scenes.


I'd like to have this segment finished by May / Early June at the latest! It'll lay the groundwork for the rest of the game's progression, so it's a good place for our team to start evaluating the pacing, battle fundamentals, writing, visuals, music & other elements.

As everyone knows, the game was rebuilt from scratch with the original assets, so I want to gauge whether it feels at the level of a true indie this time around!

In addition to my team and circle of friends, I'd like to have at least 1-2 folks from RMN help out with the testing. I'll probably make an announcement when it's ready to send!

When it came to RPGMaker, a bad habit I struggled with over the years was designing my content out of order. I'd create a map from the beginning of the game, then start a cut-scene that occurs hours later, etc. XD In that vein, it'll be gratifying to make our recent work more continuous, playable from start-to-finish.

Close
07/13/2008 07:05 AM
I love Beloved Rapture's maps and grass/falls locations. Screw the plot, check out that awesome maps.
jcavonpark

Close
09/13/2008 05:46 PM
I loved the maps too! it can still improve though! maybe you should throw in some plot-changin decision or something. Also, change the highlight pattern of choices in the menus, i once chose " quit" instead of "save " and i had to go over a big chunk of the game =_=. i long for the final realease!
obsorber
50

Close
11/30/2008 03:52 AM
This game is fantastic. Who cares what you all think, this guy is a genius. A lot of people may not like this game because they do not understand it from beginning. Well that exactly why it's a super game. I mean wouldn't you wanna know what happens next after being puzzled from start towards near the end. The action and drama is brilliant. So is the dialogue and the music can be boring at times but is also very exciting most of the game as it mainly focuses on the plot. I only wish the game was longer.
WIP Close
06/29/2009 11:10 PM
This is a nice game! Good job :D only thing is, I wouldn't really say that it's an original soundtrack considering that there are other artists in this game that are not listed in the above credits. :/
Happy

Close
09/05/2009 01:45 PM
I'm actually really looking forward to the next demo. Despite what all the people said, I was personally still able to enjoy this game. Though I'm still not very far in the game, but anyway.
Pages: first 12345 next last