Let´s see what´s this lazy, drinker, punk girl is doing. One good day she wakes up and is surprised by monsters on the spaceship she lives in! Damn, jump from the frying pan into the fire in order to save someone important to you, yourself, and (just by chance) the galaxy, while having a time-limit (and a hangover) in your hands.


The beginning was great. We get to meet Ally, a girl who suddenly finds herself in the need to save the galaxy and many people. Not because she wants. Not because she is destined to. She doesn´t even care about them. She just was around and late to escape from some mysterious mist full of monsters. 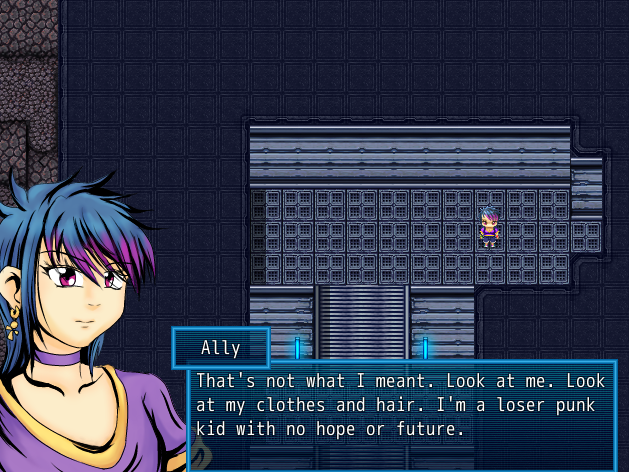 She was not after glory or fame, just survival. Maybe the world will never know about her journey, and that would be fine to her. A beautiful protagonist.

The relationships she undergoes ´til the end are short, kind of wrapped up. I feel that it was not that much developed. I expected more dialogue and/or interaction between all the characters involved.

Some things bug me

-She does not ask blue many questions throughout the game, and at the end (I got ending 3) she says she was feeling that these things happened before. For that it would have been useful to put a few hints, like "Why is this so familiar?" dialogues, or a few notes, the typical dino crisis-like documentary clues (am I old?) as diaries, experimental research or stuff that point out to the syndrome´s essence or origin, the passenger´s feelings or impressions dunno, even Ally´s past or previous connections to the syndrome itself.

-About the previous point, I wanted to know more about Ally and the relationship with her sister. It was not all clear to me, but that´s probably a consecuence of having multiple endings.


Overall good for the game´s length, in a few words.


Very good,definitely. Characters with different expressions, Ally´s body appearing on battles and the way the screen is divided with Ally at the right monsters at left are the game´s own aesthetics when compared to the generic rpg game.

Of course, it needs a good ost to combine to. The soundtrack was good for that purpose, exciting or calming then it needs to be.

Maybe a downer is the game´s shortness on those aspects (since there are very few characters and very few songs) but that´s a short game, anyway.


Frames Per Second (FPS) was beautifully fast, that´s the first thing I need to point out. Battles were fast and fluent , dialogues with just the right amount of text (neither too long/tedious or too short/ not giving enough information) also adding the skip feature, compared to other rpg games I´ve played.

On the down side I could not play fullscreen, I wonder why. The game´s interface and menu is not explained, and a bit different from your typical rpg adventure game, but that´s not a problem if you pay attention. I was actually confused at first because I though of the blue bar as the typical mana/magic, then I realized it was reserved health and it all made sense. Pay attention, folks.

Battles are fun as you need a minimum of strategy in order to defeat certain enemies and bosses.

I was beaten up the first time I played against the boss in the upper-left corner of the map. Those three eggs that turn into some sort of lobster with the +99999 attack. I needed to get the enemy freeze skills that are in the lower-right corner.


Strategies are simple, skills are a few and quite easy to understand and to manage. I think it fits well with the game´s vibe- a short, fun and dynamic adventure.


The game overall is good. Most shortcomings come from being too short, but that´s it. Thrilling and worth your time.