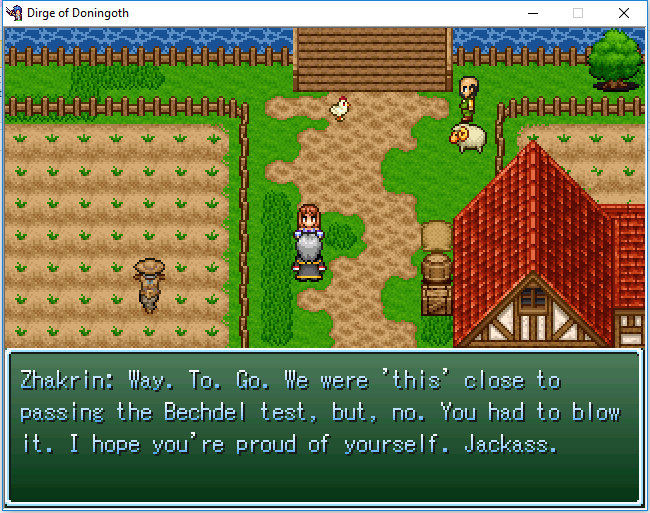 Never did pass that test.


Dirge of Doningoth is an fantastic game made with RPG Maker 2k3. The current demo was for me around two hours long and I can not wait for it to be completed. The game is genuinely funny, and filled with fun puzzles and minigames. Zhakrin is an exiled priest who lives with his only friend Paul (a zombie) when Cassandra turns up with a mission for him. Zhakrin then sets out on a mission to get out of doing the other mission. The story is pretty light so far but delivered humourously through out the demo.

In terms of gameplay the game has a an assortment of puzzles, while the first dungeon exists to explain battles and get you used to on map encounters, both dungeons that come after incorporate puzzles. In addition there are no less than four optional puzzles/minigames in town for you to try. I particularly enjoyed the maze puzzle. The cannon minigame suffers from dodgy tile based hit detection but once you get used to it there isn't a problem.

Battles are as mentioned triggered by encounters on the map, they are handled well generally. Only minotaurs caused me any grief. The presentation of the battles however is excellent, each of the party members' attacks/skills have their own animations incorporating their sprite. Zhakrin learns skills by levelling up and is a lightning/healing mage. Paul doesn't thus far have any skills but makes up for it by being the strongest party member physically. Cassandra is an ice mage/archer and looks like she will possibly buy her skills in the future but in the demo she doesn't have any way of acquiring skills outside of one story cutscene. 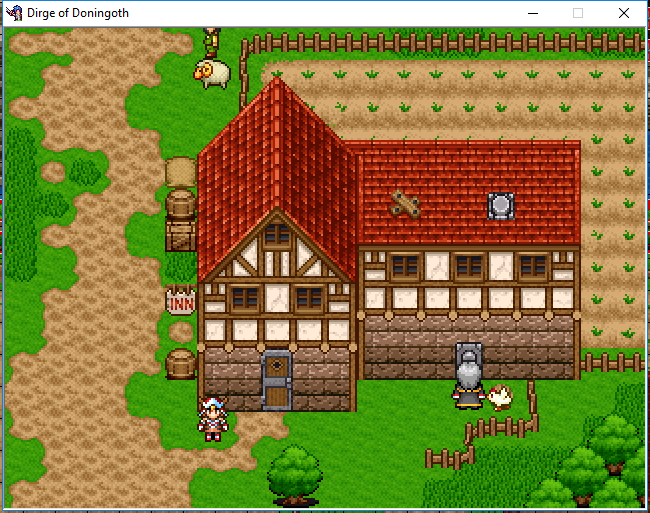 I'm not going to admit how long it took me to get that chicken there.


Part of the reason I chose to play this game was that I'd been hearing good things about its seasonal dungeon and I'm pleased to say it wasn't exaggerated. The dungeon itself draws inspiration from the likes of Banjo Kazooie and Zelda and if you're familar with Click Clock Wood that's probably all I'll need to say to accurately describe the dungeon mechanic to you. For those of you not familar with it, this dungeon has four versions of it - one for each season - and once a season is unlocked you can change between them allowing you to explore the dungeon differently e.g. boat on a full river in spring, dried up river bed in spring, climbing fully grown plants in autumn, crossing the frozen river in winter. You can also influence the dungeon by doing various things in each season but I don't want to spoil the dungeon puzzles by going into anymore detail. Let me just say it was thus far the highlight of the game for me.

I have had a great time with Dirge of Doningoth and really hope to see it completed one day. Until then I hope you enjoyed the demo as much as I did.