As somebody who sometimes struggles to find RM games that are fun to play, Othello was a very refreshing experience. Usually, when I am looking at RM games I am more concerned with graphics and story rather than gameplay, but kory’s game design chops really shine through in this game. I think what impressed me the most is how well Othello was able to make use of scripts I was very familiar with without the gameplay coming off as cookie cutter. 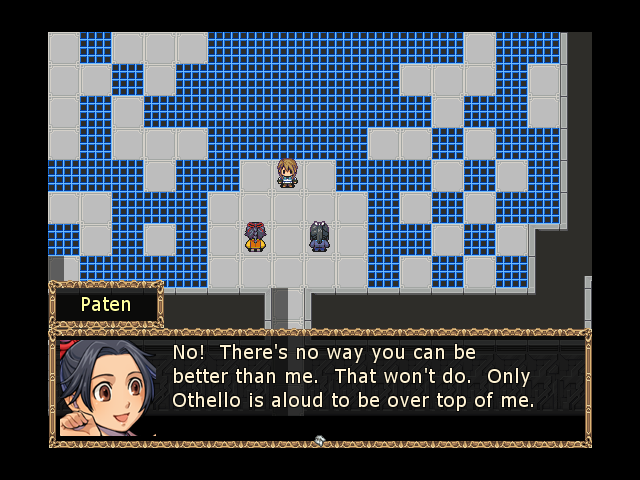 I screamed in glee at this line, you don't even know

Graphics/Music
The graphics in Othello do their job well. Unfortunately, I was a little taken out of the experience whenever I was able to source the graphics I was looking at. Looking at you Kefka and Terra from final fantasy. It was much less of an issue with the battlebacks and enemies since the enemies in Othello are mostly generic fantasy enemies. I’m not sure where the facesets came from, but I was always happy to see Othello and Paten’s faces so they went a long way with endearing me to the characters. The music was mostly the same situation although I think it was mostly free music from various sources. I recognized a lot of them, and I was bopping along most of the way so good job! 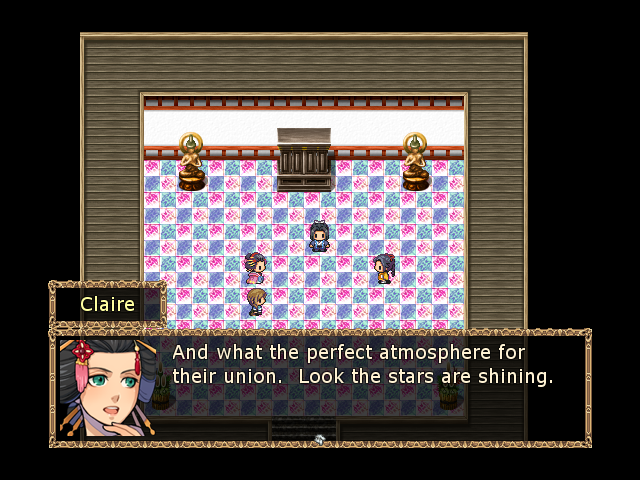 This line treats the romance between PatenXOthello as beautiful and good and I screamed again bc I thought it was just going to be a joke all game.


Writing
Although Othello does have a story, it is tangential to the experience. For the most part, the story is a string of excuses to visit different areas without much of a focus on any overarching plot. About half of the game’s dungeons are experienced simply because Paten tells you to go there (without any reasons of her own). That said, let’s talk briefly about the characters because they were pretty good!

First, my favorite: Paten! Paten is a thief and somewhat self-obsessed girl who is introduced robbing Othello near the start of the game. Throughout she was fun and drove the action whenever she was able. Her crush for Othello was very endearing. Of course, I have a weak spot for lgbtq+ characters, and although Paten’s admiration was done in a mostly joking way, the ending in which Othello acknowledges and reciprocates her flirting was super satisfying. I was rooting for the two to get together for the entirety of the game and I thought I may be disappointed, but I definitely was not. Good job!

Although Othello is more reserved, I remember thinking more than once that Othello was a badass and enjoyed her adventurous spirit. Her character mostly deals with her lineage and breaking gendered expectations. You play as her 90% of the time as she leads her friends through the game’s dungeons and learns things about herself. Leave it to Othello to be level-headed! Min and Claire were less interesting, however they brought a welcome dose of humor to the game.

Othello’s father, although never sympathetic, became a lot more compelling after seeing the final flashback. The realization that he disliked Othello so much because she indirectly caused the death of his son was unexpected but very well done. I only wish Othello had gotten the chance to come to terms with it in her own right, and still gotten the chance to punish her father even if she understood why he abused her. The mind control subplot took more away from the story than I think it added although I had a lot of fun with it.

Interestingly enough, despite the story not being the focus, the game has a number of flashbacks that come across as cliche and uninteresting - or at least until the game is near its end. I think this is mostly because they lack context for a majority of the game and does not give you much to chew on in the meantime. I think it would have helped Othello’s story be more compelling if it was more connected to gameplay! If we were visiting the locales we visit for reasons that had to do with Othello’s lineage, or were motivated by reasons that drummed up interest in the omnipresent traveler’s identity, or explored more deeply why Othello’s father was abusive toward her then it might have been more compelling. Since the beginning of the game, I was hoping we would get the chance to punish Othello’s father. Again, the mind control kind of sullied this for me, as well as the proceeding part when her party chases after her and they battle. It kind of felt like a string of wasted opportunities, unfortunately! I will say that I was feeling the story a lot more near the end, but that is mostly because the story only began showing itself near the end. I’m a sucker for party members fighting each other, and humor, and explorations of violence and abuse so I won’t say I was completely unentertained! The only reason I am critical is because I enjoyed myself! 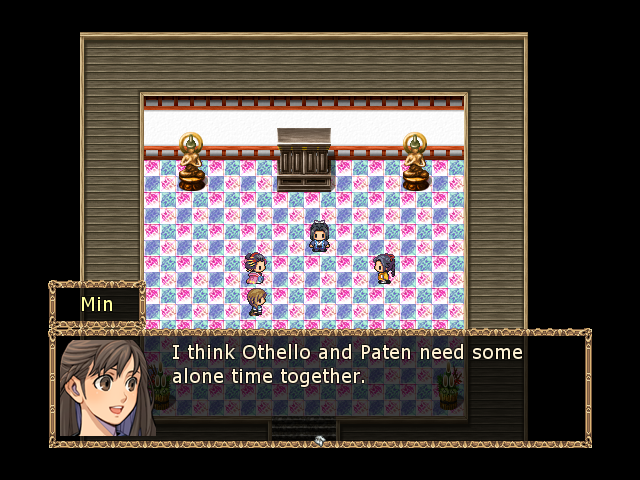 This was my exact feeling on PatenxOthello the entire game tbh

Gameplay
Gameplay mostly consists of exploring dungeons and battles which are very well designed. Although the dungeons and battles don’t do anything mind-blowingly fresh, they do a very good job at giving you a sense of progression and incentivize you to strategize. I did not do much grinding in this game because I rarely felt it was necessary. Although many of the encounters felt button-mashy in the beginning, things changed as the game progressed. Every enemy you encountered became an opportunity to get new stuff or gain a level or try out that new skill. Once Paten learned Snatch, in which I could choose to steal whatever I liked from enemies’ inventory, I was overjoyed to find new enemies and get in battles. Will this enemy have the item I need to craft that new piece of equipment? Maybe it will have a lot of gold to steal so I can buy that house in the last village? Once the matter of stealing items was settled, it was time to learn skills from the enemies! Would this enemy have a skill for me? I do feel that the skill learning could have been more exciting if more enemies had skills to steal, and if you were stealing the skills they were using, but I still had fun with it! Once that was over, you had to figure out the best way to deal with the enemies. Oftentimes, the skills you stole previously would be very helpful for this and it felt like a reward for finding the right skill! Oftentimes, the enemies would be a lot stronger than the last area, but still beatable. The reason the enemies were difficult was because I hadn’t gotten the new ally for the area yet and I became aware of this pattern pretty quickly. It was fun having the temporary heightened challenge every dungeon as well as being able to mop the floor with the enemies once you had gotten the new ally. You constantly felt yourself progressing and I loved that! The game also does this with its puzzles, in a Legend of Zelda-like fashion. Once you have a new skill you will be able to complete a dungeon and its puzzles. As you gain new skills you will go back in your mind to all of the puzzles you couldn’t finish yet, in past dungeons, and travel back there to get some nice loot. It all flows every nicely and rewards the player very well. I had a lot of fun with this game! I got most of the ultimate equipment although I never got all of the secret endings because I got craft happy and ate up my space katana. That was a sad time, but I think I got most everything else! Once the game looked like it was in its end stages I made a concentrated effort to find everything and I got really close.

Conclusion
Despite my critical analysis of parts of the story I felt were lacking, I had a lot of fun with this game. I feel a little bad reviewing a game that another secret santa had reviewed in the past, but I couldn’t put the game down after I had started and I had a lot of feelings about it once I was finished. There’s nothing more you can ask from a game so congrats! 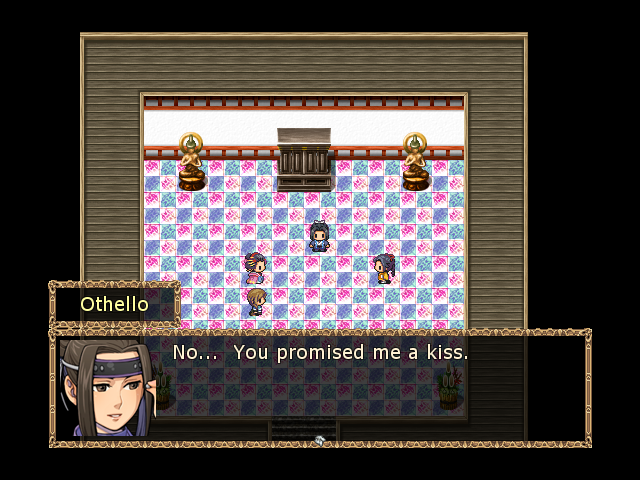 ITS HAPPENING THIS IS NOT A DRILL

OthelloxBasketheadxPaten 4 ever
that is all.