I played (and reviewed "the brief and meaningless adventure of Hero Man", that was made by the same author of this game and is somewhat related to this game. Brave Hero Yuusha is in fact another parody of the 8 bit jrpgs with a new protagonist that is really similar to Hero Man (but his armor is purple, not white!). Unlike the short adventure of Hero Man, this is a longer and more linear story with far more characters, monsters (some were already present if Hero Man's game), locations and quests.

The story is both familiar and new: H̶e̶r̶o̶ ̶M̶a̶n̶... no, wait, Brave Hero Yuusha is a young boy chosen (withour his consent) to defeat the Demon King and save the princess (that he will marry, of course!). BUT things changes unexpectly when thanks to a "shortcut" the Brave Hero Yuusha meets the Demon King, his nemesis, few minutes after beginning his quest. Just before the final combat a new dangerous enemy appears: the Puppetteer, a being that is destroying the story of the hero stealing parts of it (including parts of the bad guy's castle)! 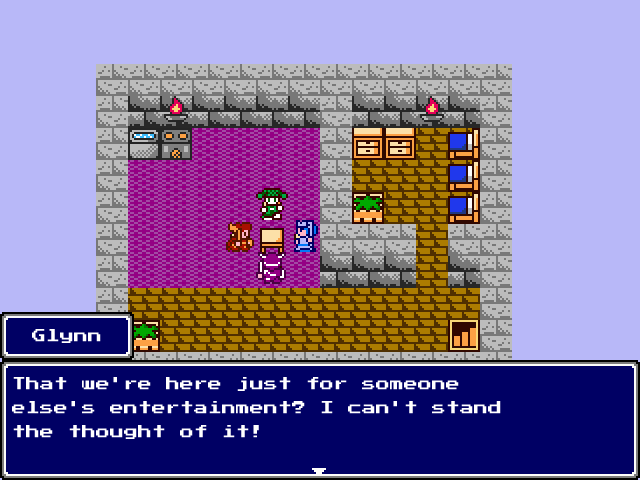 Unlike Hero Man, the Brave Hero Yuusha (that has no default name and can named as the player wishes) isn't a loner and will be joined by two unlikely heroes: the evil Demon King and the kidnapped Princess (that are named Volza and Glynn but CAN be renamed). The first is a warrior with dark and healing powers, while the princess acts as the typical mage with elemental spells and area attacks (and weaker physical attacks). Due to the presence of a party of three, the simple combat system taken from Hero Man is more complex, but there are also some new additions like the presence of some interesting opponents with singular behaviours: expect bosses with different forms, groups of enemies that empower each other, enemies that summon other enemies and so on.

Dungeons are varied and each one has some kind of "gimmick": a tower that need an item to climb some walls, ice caverns with sliding floors and fire dungeons with lava floors are some of the places that will be explored by the heroes. 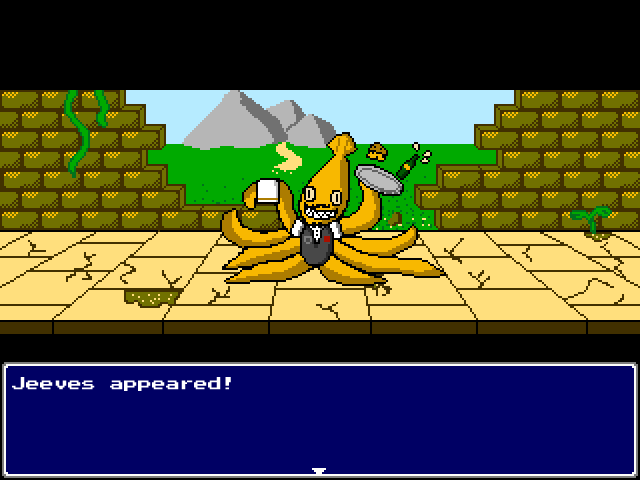 This time the world is larger and more varied, there are different villages (not just one!) that offer various shops and inns, but wait! Often you will have to restore the missing parts and people that the Puppetteer stole and scattered in the dungeons. Graphically the game isn't much different by Hero Man, but I liked the use of custom chipsets and sprites, they are simple and effective and well recreate a typical 8 bit jrpg. There are many monsters, and they look nice, this time there are also battle backgroundsmade with the same style.

There are some typos (like "unaccptable"... others like "solider" I think were made on purpouse for comedy reason, to rapresent badly translated games!) but for most part the writing is good and effective. Characters are interesting and the story is pleasant, I like how the young hero protagonist is unwilling to be the chosen hero, the Demon Prince doesn't want to be evil and the Princess believes she doesn't need a saviour (and she's right)!
The games takes 4 or 4 hours and a half to complete, it depends if you look for the optional moon medals or take your time to explore the dungeons and find optional loot. 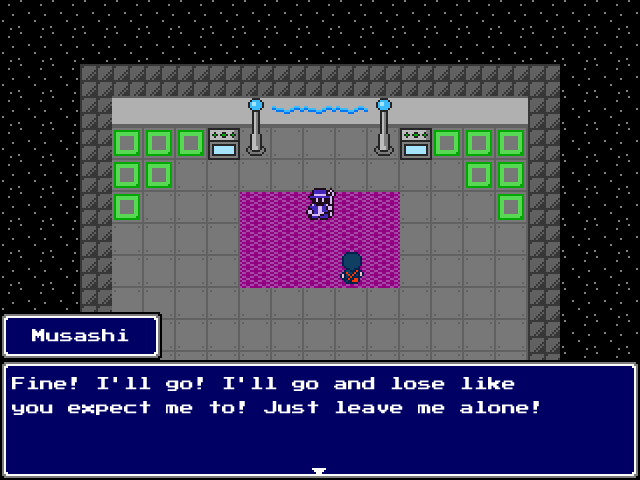 You will be defeated, too!

The only weird thing I found is the first enemy you find after starting the first dungeon: unlike opponents, that appear during random encounters, he can be talked to, but if you do that, without any explanation you can skip the first dungeon and go directly to the first boss with a 30th level party (that's the maximum level) that will also make the rest of the game a walk in the park. It's strange because no one explain or ask you anything about this option, anyway the game is not that difficult even if played normally, I found no need to grind and no unfair opponents. There are both consumables and items that give permanent bonus, besides a good selection of equipment for the three heroes.

Verdict
Brave Hero Yuusha is another great little parody game, longer than Hero Man and more refined, but no less entertaining. The story of the Yuusha is also interrupted by a parallel story about a boy and the book that tells the story of the Yuusha, that gives an interesting view about the adventure.
I liked a lot this game, it's simple but well done and the retro look is really pretty. The only flaw I see are the brevity (but it's still not too short compared to other similar games) and the fact that it's really nothing new or varied (random encounters, simple puzzles, boss fights and repeat!). Anyway the execution is very good.
This gets a 4/5 (exactly as much as the brief meaningless adventure of Hero Man because 1) it's more classic and less original BUT 2) Does everything better under every aspect, from graphics to combat and story!), I had fun and played it from the beginning to the end!

Close
07/25/2020 05:43 PM
Thank you so much for this great review! I've always considered this my first "big" project and it was the first game I did with all custom visuals, so it holds a special place in my heart. I'm glad you enjoyed it!

And oh dear, that npc that makes you level 30 must be a debug thing I left in when I was starting the remstered version's development. I had recently updated this version of game to fix something but I must have left that in by accident.

author=Sgt M
Thank you so much for this great review! I've always considered this my first "big" project and it was the first game I did with all custom visuals, so it holds a special place in my heart. I'm glad you enjoyed it!

Yep! I enjoyed it a lot no matter how old are these games, and I hope that some other people have the chance to play them! While isn't overly original like Hero Man, the custom visuals were excellent. I loved the monsters and how they fit the various "settings" like the final hi-tech area.

I also feared a "Boss Rush" in the last level, but luckily you opted for something quite different! (I won't spoil! But I was not totally wrong at least!)

author=Sgt M
And oh dear, that npc that makes you level 30 must be a debug thing I left in when I was starting the remstered version's development. I had recently updated this version of game to fix something but I must have left that in by accident.

Oh yes, the first time I activated it my mistake and I believed it was done on purpouse, then I replayed the beginning and learned that probably it should not have been there (since there was no message or indication... but it could have been an option for an "easier playthough"!)