*spooky music plays in the background*

Hello!
Loooong time ago I played Deadly Woods, a pretty cool mystery game in which I was able to solve the mystery and get the Good Ending. Looking for similar (complete) games, I found this one!

Mystery Falls can be considered a prototype of Deadly Woods. A shorter, simpler game with a smaller town, little or almost no quest or minigames (well you can still play the videogame inside the arcade parlour, but that's it!) and the same references to the X-Files, Twin Peaks and so on (also to Deadly Premonition and Mizzurna Falls)!

The game starts exactly like Deadly Woods: like Desmond Miles was travelling in his car to DreamVale to solve the disappearance of Sarah Anderson, here our alter ego is David Parker (David appears in Deadly Woods too) that is going to MysteryFalls in order to solve the mystery of the disappearance of the little Sarah... yeah, it's pretty much the same premise (see why I said "prototype"). Oh yeah, like in Deadly Woods you start with a car, and this is extremely useful to move quickly around (but watch out for the other cars!). 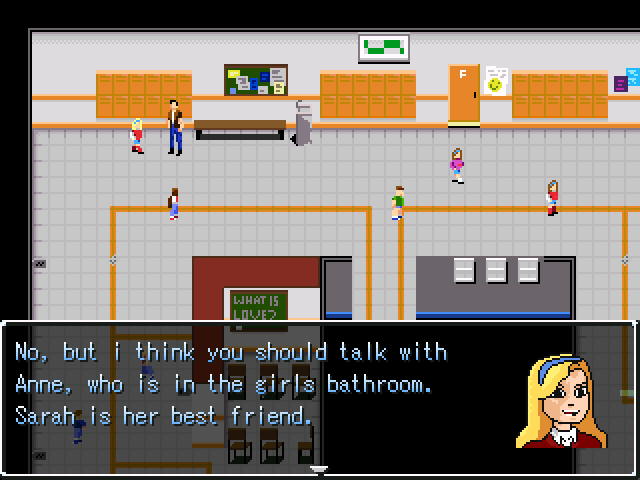 It's time to and enter the girls bathroom to investigate!

A good thing is that MysteryFalls is a little town, smaller than DreamVale, unfortunately here we won't have a map, thankfully it's so small that if you know where you have to go, after a while you will find your destination.
IF you know, that's it!
Don't make the wrong assumption, the game always give you the directions but just once, so if you skip the dialogues you're on your own! Also the game encourages exploration, even if the city is smaller and with less interesting parts and features than the DreamVale of Deadly Woods. But this also means that you will need less time to complete the game, it took me one hour and a half, a little more (about two hours) if you want to see all the possible endings and explore every corner of the map.

In the three chapters of the game we, as the Fbi agent David Parker, will have to investigate, interrogate suspects and explore the little town. But there are also a couple of action parts, like a chase and a run-and-gun action section.
Besides zombies and dinosaurs (oh yes!) mind that there are also two unexpected ways to die: the first crashing against the various vehicles that move around, the second is dying in the videogames of the arcade parlour (I admit that these were easy and this never happened to me!).
Luckily there is no instant death, in fact you can heal, for example
g̶o̶i̶n̶g̶ ̶t̶o̶ ̶t̶h̶e̶ ̶h̶o̶s̶p̶i̶t̶a̶l̶ ... no wait, you just have to drink something from the vending machines for free (!), OR you can spend some money at the local supermarket for some consumables that will be kept in the inventory and used when you need them.
No money is required to change clothes or hairstyle, unfortunately this is temporary modification that will be removed as soon as you pass the nect section, so it's totally negligible. The game can be saved anywhere and anytime, so take advantage of this! 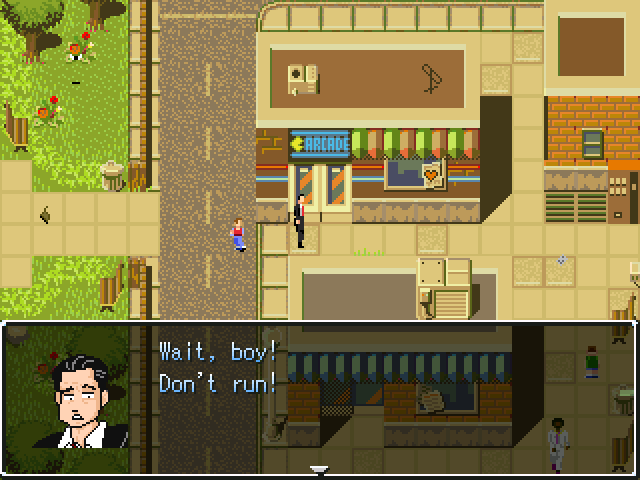 Hey... you are facing the wrong direction, man!

The game is a pretty linear adventure with some different endings that I noticed depends from the last choices, anyway I took the game as a parody of the mystery tv series and I had a lot of fun with the unexpected outcomes of the game (yeah, here the game differentiates a lot from Deadly Woods!).

Visually the game has more or less the same style of Deadly Woods, even if there are facesets instead of busts (and if I am right there are lots of them, for every character, unlike in the other game where these were reserved to the named characters). Characters sprites are also less stylized and more realistic, but it's clear that the custom assets are more or less the same (since the author IS the same!). Anyway I liked those, and I like these!
Music and sounds are excellent too, there are clearly many classic themes, like the X-Files composition, and I don't complain at all for the selection. 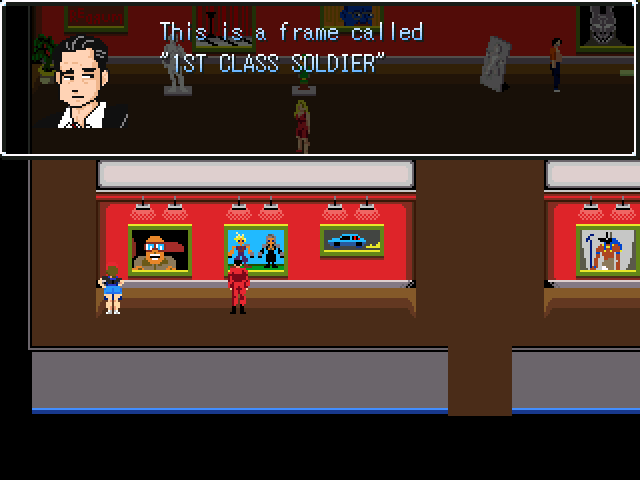 All these paintings here look strangely familiar to me! By the way, do you like my new red suit?

The Verdict is here...
Mystery Falls is a short and surreal adventure game, linear and without the many diversions of Deadly Woods. I know that this may be seen as a draft of Deadly Woods, but this is still a complete game and a different adventure (now I know who is David in Deadly Woods! And ome of the endings somewhat linked with the one I had in Deadly Woods, when I captured the bad guy... but I cannot spoil the story, play and live it!).
The only bad thing are probably the deadly traffic and arcade games (not deadly at all in Deadly Woods, from what I remember!), but there isn't anything else worth mentioning since I saw the game as a wild surreal dream, and even if many things look weird (like the behaviour of some of the few named characters) or totally unreal (like the presence of some characters during the final parts, whose roles is never explained at all) ... this fits the overall feeling of a dreamlike adventure.

For me this is a nifty little game that needs less committment than Deadly Woods, as a sort of little brother. But still a fun guy! Yes, this may be not a perfect game, in some parts it's maybe even a bit cheesy, but the amount of little details is astonishing, and it's clear that the developer dedicated a lot of time to it. Another 4/5 for me!

Close
06/06/2021 11:31 PM
That's awesome! Thanks for the review! This was indeed my very first game. I'm glad you liked it.
looking back, it really is a pseudo-prototype of what Deadly Woods would've become, after i got a little more experience.
Ps: if you ever get to play Similar Mountains, another adventure i made, don't mind all the edgy stuff i put in there. I was going through a "phase" when i made that game XD
TheRpgmakerAddict

author=richterw
That's awesome! Thanks for the review! This was indeed my very first game. I'm glad you liked it.
looking back, it really is a pseudo-prototype of what Deadly Woods would've become, after i got a little more experience.
Ps: if you ever get to play Similar Mountains, another adventure i made, don't mind all the edgy stuff i put in there. I was going through a "phase" when i made that game XD

Oh yes, Similar Mountains is another game I planned to play sooner or later!
But isn't The World Needs you the real Deadly Woods prototype? I mean, it has the same graphics, features both agents and it's also a demo... well just curious!
richterw

Close
06/07/2021 08:56 AM
Yep. It is the "real" prototype of Deadly Woods, so much that i thought about deleting it, but then i decided it was different enough to be it's own interpretation, and worth keeping.
I would say it is bigger in scale, but less focused.
TheRpgmakerAddict

author=richterw
Yep. It is the "real" prototype of Deadly Woods, so much that i thought about deleting it, but then i decided it was different enough to be it's own interpretation, and worth keeping.
I would say it is bigger in scale, but less focused.

Yes, funny thing because it looks like the plot is a little different...
richterw

author=TheRpgmakerAddict
Yes, funny thing because it looks like the plot is a little different...

I made each game like different cases, but with small connections to each other, something like episodes of x-files. They can be played like stand-alone games, of course.
In my mind, it is organized like:

Again, i'm glad you're enjoying these games. Your feedback is really appreciated.