Is the Villain a Rabbit?

On the surface there's nothing really special about Aria's Story. A horror game made in RPG Maker, with a cute young anime girl as the protagonist and the sole player character (well, at least for a good portion of the game) — it isn't surprising to see comparisons drawn to Ib, Pocket Mirror, The Witch's House and other popular RPG Maker horror games. In fact, Aria's Story falls very much in line with them, as the game embraces a lot of the themes and tropes typical of the genre. But what makes it stand out is how well it manages to execute them. It learns a lot from its predecessors, building on what made them good and avoiding many of their common shortcomings. The developer worked on the game for several years, listening to feedback and diligently making fixes and improvements, and the result is a highly polished game — not only is Aria aesthetically cohesive, but the gameplay has been rid of various annoyances that would typically be present in games similar to it. 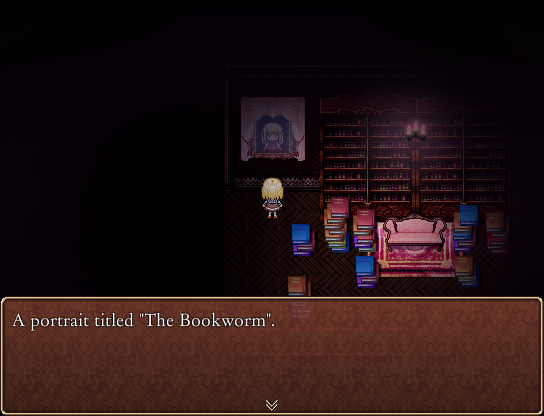 The premise of the game is a classic "trapped in another dimension" type of story. The title character is a huge nerd who's obsessed with books and frequents a certain library, where she one day accidentally falls asleep and wakes up in an alternate dimension version of that library. Your objective is to guide Aria out of there — of course, there's a lot of turns and twists along the way, but your goal largely remains the same throughout the game. The library is massive labyrinth, so it takes quite a while to find your way out. The game is approximately 3.5-4 hours long and is divided into five chapters: each of the first four have a unique theme, namely Comedy, Fairy Tale, Romance and Horror; the last chapter is the culmination and the conclusion of the story, which, depending on certain choices you made earlier, can end in 3 different scenarios.

Aria's Story mainly focuses its gameplay on puzzles. Some of them can be pretty clever, but most simply have you run around collecting items and giving them or using them on corresponding objects. Nonetheless, despite their simplicity the puzzles never feel dull. Almost every puzzle has a mini-story tied to it, be it books going to school and struggling with their exams, or a book being upset because it didn't win a cool prize in a raffle, or a beautiful statue being insecure about its appearance. There's also elements of symbolism here and there, and some of the prevalent themes throughout the game include mirrors, ancient sculptures, dolls, and rabbits. All of these may or may not have any sort of deeper meaning in the larger context of the game's story (I certainly wouldn't want to read too much into helping a jester find his balls), but they do a great job at keeping your journey through the library engaging and exciting.

There's a degree of light-heartedness to Aria's Story that can rarely be found in other horror games. And even though it is still very much a horror game (controversial, I know), it feels refreshingly wholesome — the characters are nice to you, and the library always feels like a welcome place, despite very obviously trying to kill you and there being death traps everywhere. It's something I really personally appreciate about the game, although I could understand other players wishing for a darker and grittier experience. 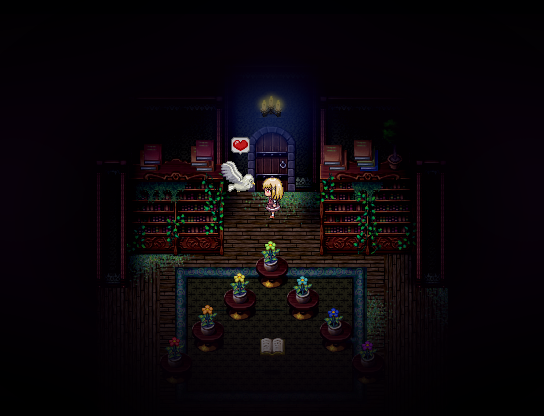 Speaking of death traps, that's one of the things that so many RPG Maker horror games get wrong, and Aria isn't exactly a shining example of them done right either. Most deaths look way too silly and sometimes outright comical (which is, however, probably intentional in some cases). There isn't the same kind of shock value that you would find in other popular RM horrors, and it's admittedly a bit disappointing. But at least here you never have to walk too far to get back to where you were before you died, thanks to the abundance of save points throughout the game.

In general, Aria's Story isn't a particularly scary game. The atmosphere is creepy and well-built, but you do get used to it eventually. There are some moments that might startle you, but none that I would really call "jump scares". There's only chase sequence and it's probably the scariest moment in the game, but even that isn't very scary and lasts only like 5 seconds.

I also feel that Aria's Story lacks a certain emotional punch. One of the main things that I like about RPG Maker horror games is how hard-hitting their stories can be, and unfortunately Aria didn't quite manage to inflict any strong emotions on me. It's not necessarily a bad thing per se, but the problem is that the game makes a clear attempt at making the player emotional, and it failed to do so in my case. There is a pretty sad backstory, but it's not super tragic or haunting. It also only gets fully revealed in the True Ending and only at the very end of the game, and it just feels way too out of the blue to have a proper impact on the player. Which is nothing to say about the Bad Ending — it's completely out of the left field and doesn't seem to fit with the rest of the game's story at all. The Normal Ending, on the other hand, was a bit "too normal" for my liking and felt kind of anticlimactic, which wouldn't have been too much of an issue if I hadn't had to go all the way back to Chapter 4 and replay the entirety of Chapter 5 just to see the True Ending. 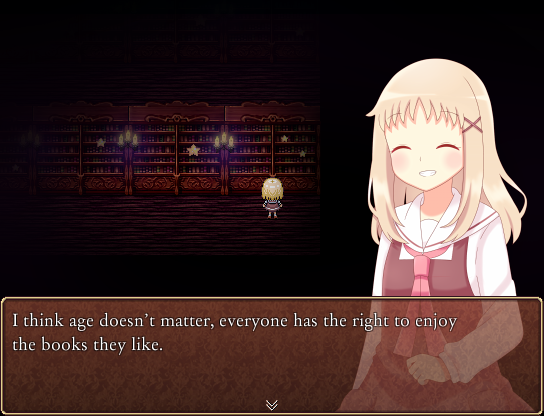 With all that said, I still enjoyed Aria's Story a lot. It has the appeal of a classic RPG Maker horror game with strong atmosphere and intriguing puzzles, but also features what I loved so much about Deep Sea Prisoner's The Gray Garden and Wadanohara — an amusing and heartwarming style of storytelling, fun characters, and a general feel-good vibe in contrast to the dark subject matter, all of which work together really well against all odds. There's a lot to love or hate about Aria's Story depending on your taste, but it is an incredibly well-crafted game in general, if the warm reception it has gotten since its release is any evidence. Personally, I haven't felt this good about an RPG Maker game in a while, and I can't wait to see what the developer can come up with next.