I admit that I discovered Final Fantasy IV only after the release of the 2007 3D remake for Pc in 2014. And I played it even later, but I admit I enjoyed the game both for the 3D new graphics and the old-styled gameplay. 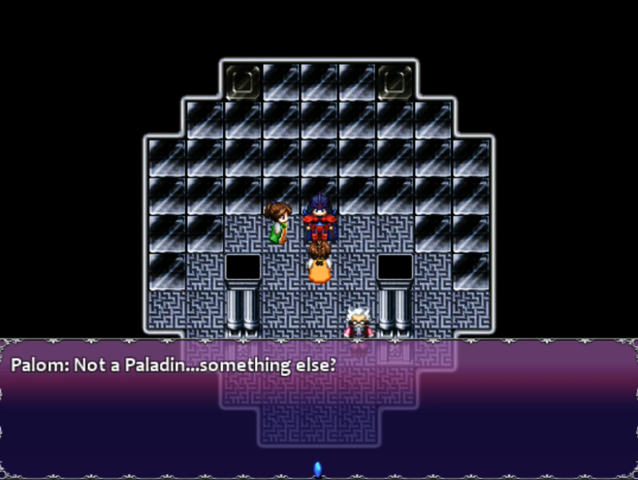 This is when Cecil becomes a Pal... no? Wait, give me the script!

But let's talk about this Final Fantasy IV Alter Destiny: this is a sort of alternate storyline in which a lot of things change. We still play as Cecil but no, he will never become a Paladin. Rydia will never join him, on the contrary she will oppose the hero everytime she meets him (for obvious reasons). So this is a sort of retelling but with there are lots of events that changes and despite the familiarity you may have with the original storlyline, this is a totally new experience that will surprise the player, despite keeping the same actors involved in the epic story.

But, being this a Final Fantasy game you can clearly expect the usual gameplay we love: exploring dungeons with our beloved party members, travelling the world map on foot or flying on an airship, fighting monsters et cetera. So nothing new at all, but it works, anyway it's advise you played the original game to appreciate this fully (because it's also a great game!), anyway I won't judge you if you aren't going to do that!

IF you played the original game you probably won't be surprised much from the first part of the game, since the changes aren't particularly world-changing and they can be probably guessed (like Kain staying for example). Later things REALLY takes a weird turn with new party members and some unexpected deaths... more than in the original game. That quite shocked me! 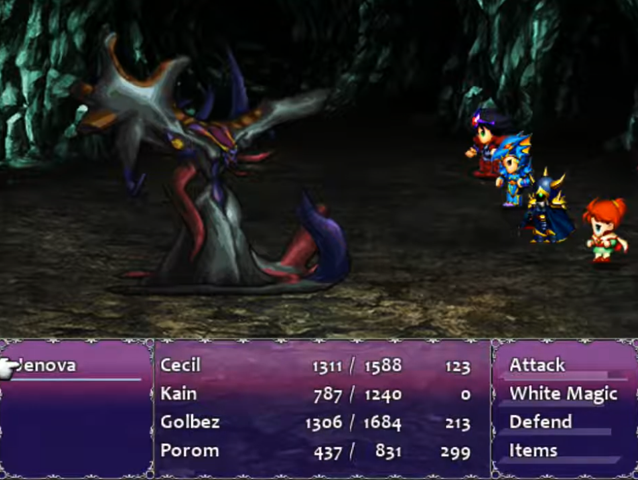 Hey Jenova stop! You're in the wrong game!

I also was surprised because I expected that Cecil wasn't going to become a Paladin like in the original game, but I imagined him becoming the opposite, I mean a sort of Antipaladin or Hexblade... but no, he becomes something else entirely, and a character that is pretty interesting and very versatile. Also fun to use!

But despite al the little big changes, I like how the game remains faithful to the genre and recreates the familiar places of the original FFIV. Maps uses resources that fits well the world that they are meant to recreate (you could say this is a lazy recreation of the old maps, but hey this is what it was supposed to be, a homage, not a new or different game!), and the simple old-styled layout is appropriate, like are monsters and character sprites. There are just a couple of new locations, while others were removed (not without some good reasons, anyway if you played the original game you will understand what I mean), but that's ok! In the end despite the clash of some asset styles, the graphics are for the most part impressive because they translate pretty well to Rpgmaker the fantastic world of FFIV.
Music obviously comes from various versions of FFIV but there are some remixes and the occasional theme from a different jrpg, in any case I did not mind!

What I think was rather out of place was the presence of characters from other games, like Jenova and Aerith (!!!!)... why? 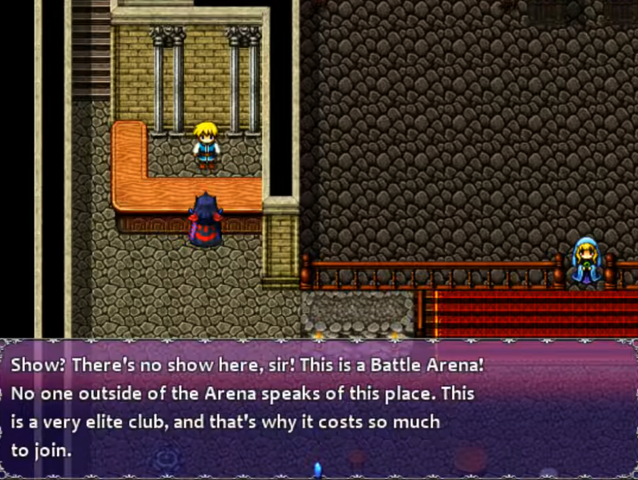 A battle arena is a recurring feature in the Final Fantasy series. So this is not a surprise!

Final Verdict
This game is a good attempt to recreate the fun of playing an old classic Final Fantasy game with some additional twists. I admit I did not like some of the changes, like the impossibility to damage undeads with the cures or the removal of the classical random encounters (it's true that I hate hose archaic random battles, still it was a distinctive trait of the original game so it should have been kept, I think!), and I also wasn't a big fan of this charsets style, preferring a more "chibi" old style (almost FFVI-sh) like seen in Final Fantasy IV: The Complete Collection.
But despite those few aspects I mentioned, for all the rest this is a pretty good game that can entertain a dan of the series for twenty or more hours! I especially liked how Kain and Golbez have more interesting development in this particular alternate timeline. This game is an impressive job, really.