Except that's a lie and we cannot! Uhm nevermind, anyway we must hurry. Hickville is in danger!

In this game we play as Tithus, a Brightblade knight that is called by the captain of the guard to talk about an important quest: capturing a panty thief! Yes in this game we have to capture someone who is stealing underwear, but it's not all! When we exit the pub, where we had the the meeting, we discover that Tithus' house has been stolen! Yes, it disappeared (reminds to me of the good old The Most Stupidest Game Ever - Re-duh!, another silly and parodistic Rm2k game)!

I admit that I was able to die TWICE before arriving at this point and yeah, that's not even ten minutes of gameplay! No, this did not happen due to some awfully balanced combat, but for bad choices, because the game has lots of silly interactions and some stupid ideas that may lead to a Game Over through a silly bad ending. Heh. But since you can save from the menu whenever you want, we're free to experiment, I guess! 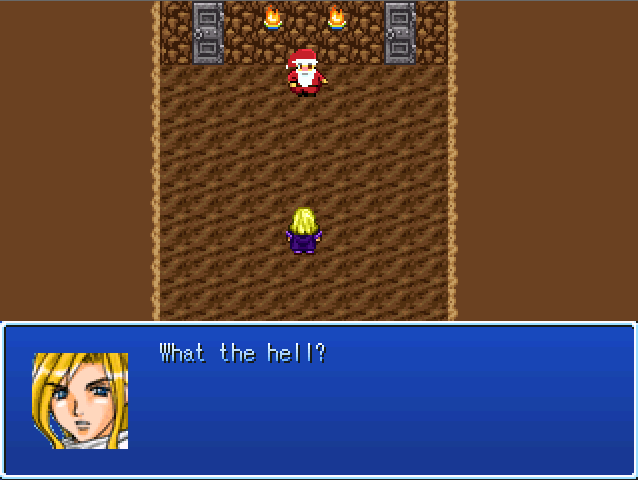 Yeah, that's not just the title but also the leitmotif of this story!

Ok, I probably do not need to explain that this is a silly game with many humorous encounters and cutscenes, anyway we know that humor can be subjective and not everyone will laugh at some jokes, anyway I really liked some part and aspects, like the recurring mentioning that the water of Hickville is terrible, and you can even buy it for FREE, but if you discover the reason for its peculiar taste... I also liked the black knight minigame/stupidgame part but hey I love making fun of classic jrpgs!

The game includes a dungeon with some combat but everything is super easy, and you can win each encounter, including the boss fight, with one or two attacks at most. It's a joke, really, but good thing since I hate ugly mapped dungeons with random encounters, even if in this case it's clearly a parody!

Visually the game uses Rtps with the exception of some hideous custom made sprite, but ok I take this as ironic, I mean this is not a game that has to be taken seriously. I mean there are some mismatched graphics like the battler that's clearly taken from another of the database characters (faceset and charset match instead... at least for the main characters, I cannot say the same for the secondary ones!).
Mapping is ok for the most part, I expected to find horrible maps like the incredibly spacious sewers of other jrpgs (even of these serious ones), but no. Well to tell the truth the only dungeon IS horrible (but it can be skipped if you want), and for the rest there is nothing memorable, but I appreciate the details and some interesting bits, plus the fact that they're pretty much compact in size. 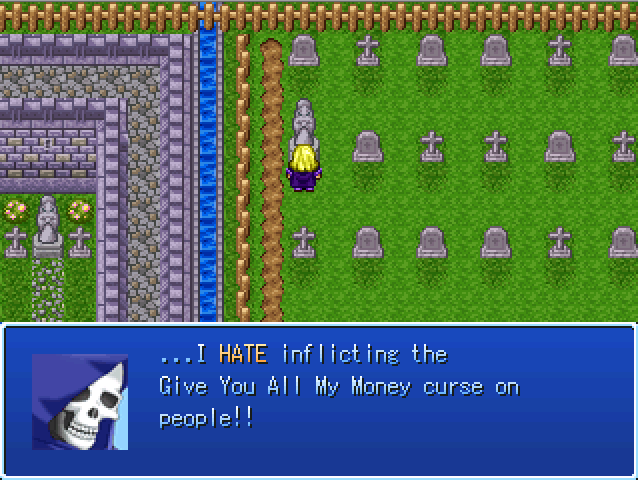 Well I must admit that I do not mind this. AT ALL!

Final Verdict
Ok, this is a demo, still it has enough things to do to deserve a full rating, I mean it includes a mission and the beginning of a second adventure. In my opinion it's not as good as the already mentioned "The Most Stupidest Game Ever - Re-duh!" (that's longer and more varied) BUT on the other hand it's still better than "The Amazing Adventures of Captain Maloneum (has no glitches/bugs except maybe for the final area, that is incomplete but ok): The Pinnacle of Masculinity" (hey these silly games have really long names for sure!), so if you somewhat enjoyed these titles (like I did) you can surely try this one too. The most important thing to remember here is that there are many instant deaths provoked by acting in a stupid way or saying a stupid thing, for the rest there's nothing new or particularly worthy of note to mention, I guess. An ok "lol" game*!


*Note of the Author: we used "lol game" during the gold era of Rpgmaker to define those Rm2k and Rm2k3 games that were little project made to have fun. Besides the lack of seriousness, these games often featured lots of Rtps mixed to some bad custom made assets, cameos and references to other games, stupid dialogues and some bits of gameplay.

author=blazebat
Well, at the risk of being incredibly stupid and not leaving well enough alone, I am now inspired to actually work on this abandonware again. I might make up update in the next few weeks.
There were 4-5 islands planned but I got so obsessed finding ways to blow up the first one. But the second one will be finished.

Nice! I like these old Rm2k/rm2k3 games! They have a distinct charme to me... well I hope I am not the only one!!!
blazebat 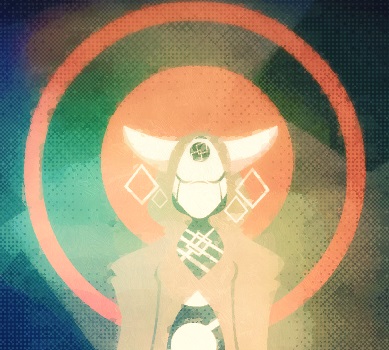 author=blazebat
Thank you so much for reviewing my ancient and stupid-as-hell game! I'm glad you enjoyed (or at least tolerated) the lame attempts at humor!

Yeay it was a funny romp! Short but fun!

Well, at the risk of being incredibly stupid and not leaving well enough alone, I am now inspired to actually work on this abandonware again. I might make up update in the next few weeks.
There were 4-5 islands planned but I got so obsessed finding ways to blow up the first one. But the second one will be finished.
TheRpgmakerAddict

author=blazebat
Thank you so much for reviewing my ancient and stupid-as-hell game! I'm glad you enjoyed (or at least tolerated) the lame attempts at humor!

Yeay it was a funny romp! Short but fun!
blazebat