I think I have a new favourite chill out game...

Phantom Block is a surprise addition to the site that completely slipped by my keen eye. It's a puzzle side-scroller made in Game Maker.

Being that this is a puzzle game, it really has no plot or writing. You're a little cube who goes around to different stages, collecting coins and using various powers you can find in each stage to complete them. It's very simple and doesn't actually need any words to get that across.

What written aspects there are use good grammar, spelling and such. The one thing I'd like to see is an explanation for the various Cheats, but otherwise, it's pretty self-explanatory. 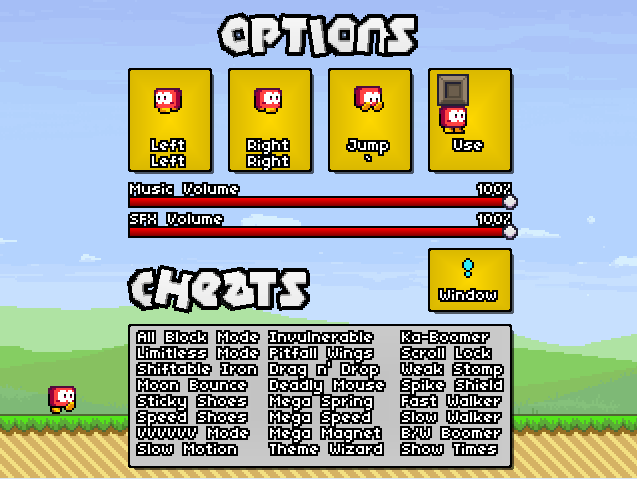 Ka-Boomer? Is that an exploding elderly person? Sign me up!

A game like this lives and breathes with gameplay and aesthetic since there's no story to lean on - which is fine in this case because the graphics and sounds are very well done.

The various worlds have their own themes and the graphical assets are very clear, easy to read and look lovely. You won't lose sight of your main character and enemies are easy to see. The option of full screen or window helps with those who are a bit vision impaired, too.

The sound is a treat. There are a few tunes based on the areas you visit, and each one is cute, boppy and fits well with the tone of the area in question. From the more sombre tones of the forest to the boppy ice area, the music is great and while not an earworm, aren't distracting to the main focus of the game - the gameplay itself.

Sound effects are well-used, too, and there's a decent amount of them. They fit well with the actions they're paired with.

Really, the aesthetic areas of the game shine very well. The only issue I found was the text being a little hard to read in some areas or fading away a bit too fast, but otherwise, it all gels well together. 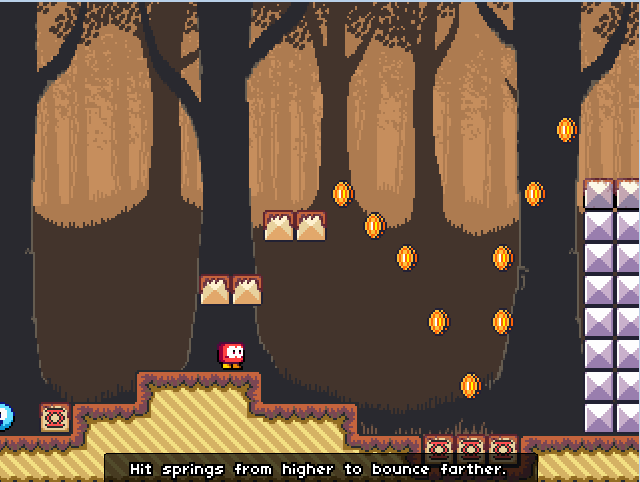 Look at this pretty forest guys. LOOK AT IT!

The meat of a side-scroller and what can make or break a game of the genre is the gameplay and I'm happy to say that while there are a few questionable aspects, on the whole it's very nicely done.

The jumping feels good, giving you a nice amount of control on both ascent and descent. There's a little bit of float but it's not hard to adjust to and it feels nice to play. Even the wall-jumps are pretty nicely done (something that can be hard to nail properly). I'd perhaps like a bit more control/responsiveness on the descent but otherwise, it works well.

The movement is fluid, though it could be a little more so. Speed of movement feels good too. These three things - movement, speed and jump arcs tend to be the main components of a side-scroller and tend to end up making the difference between a good one and a bad one. In this case, though there could be a little improvement,o overall this aspect is nicely crafted.

The rest of the game is interesting, to say the least, and it offers a new take on an old game type. You collect coins in each level to unlock new levels to collect more coins to unlock new levels. It's a never-ending circle but with the variety of levels and challenges within, it feels fresh each time.

The reason for that is due to the fact that instead of giving you powers to keep as you continue through the game, you get them based on what you need each level. One level you might need a magnet, another you might need a jump pad and in yet another, you need wall gel for wall jumping. The game gives them to you on a level-by-level necessity and it makes the gameplay feel different for each level.

It really removes the feel of 'the same thing for each puzzle' that sometimes occurs when you get powers through progression and it really works for this game. The powers are used by clicking on certain blocks in order to change them from one type to another, and in the case of you having more than one power, scrolling the mouse wheel changes between. It makes for an interesting experience and is pretty cool.

On top of that, as shown in an earlier screenshot, you have a variety of options to change the game up a bit, including silly things like having slow motion or showing a timer in the game that helps change things up a bit more. 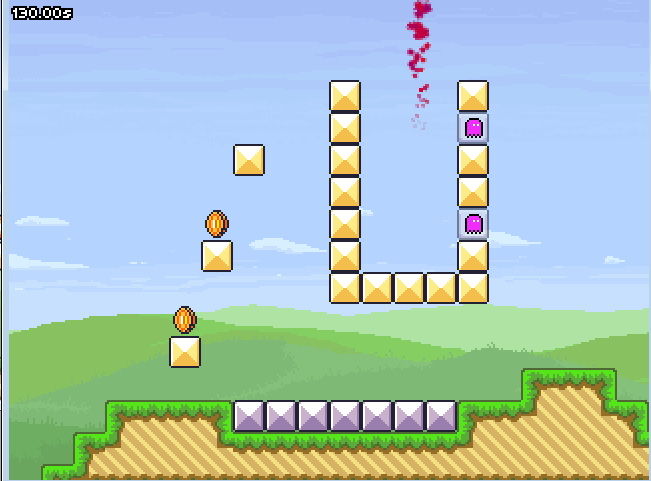 I tried speed shoes, VVVVVV mode, timer, Ka-boomer and Deadly mouse out. It didn't end well for me. ;.;


Unfortunately, there are some issues with gameplay that I really can't ignore. One of those is the lack of controller support. Now, I understand why that is - and it's a good reason - but it really doesn't help the game that you can't use a controller.

See the reason for that is another reason I've got an issue with the game. As you can see in the options menu area, you can change your movement set-up. By default it's set to A/D movement, W jump and E interaction, which is fine... but I've never been a fan of up to jump games, sadly. The reason that this is the set-up is because you need the mouse to interact with the blocks to use your powers. It's not something that can be easily replicated with a controller as the need for speed in some levels is integral to the puzzle.

It's a pity, as this kind of game just goes hand in hand with controller support. Maybe something like a pause feature with a timer to use the skill or something within that time would work (press RB, quickly pick what block/s you need to change, then press RB to unpause/wait for the timer to run out). It's an idea. 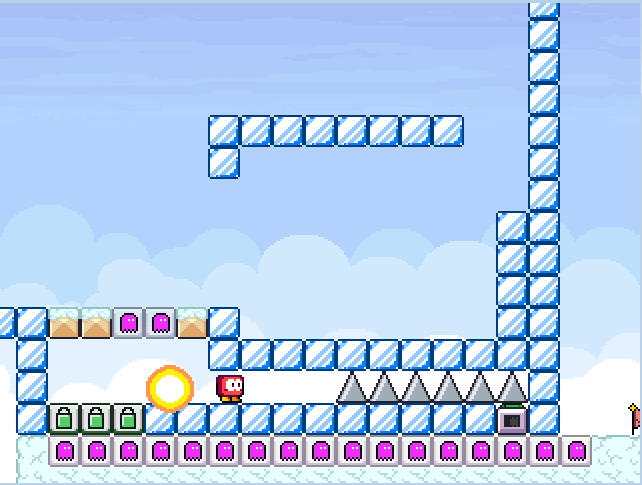 I really enjoyed this game a lot and had a lot of fun playing with it (even if I'm terrible at certain 'challenges'). There's a lot here for people to mess with and customise their own experience, but the default settings are pretty great on their own and really didn't need anything extra.

Overall, the game is a lot of fun and I highly recommend anyone who enjoys a god puzzle scroller to give it a shot. It's been seriously overlooked and could do with more love.

I'm giving it a 4.5, but adding an extra .5 because of the sheer thoughtfulness that went into making all those extra options for customisation. Seriously, that wasn't necessary but that the dev went and did that just puts the icing on the already delicious cake. 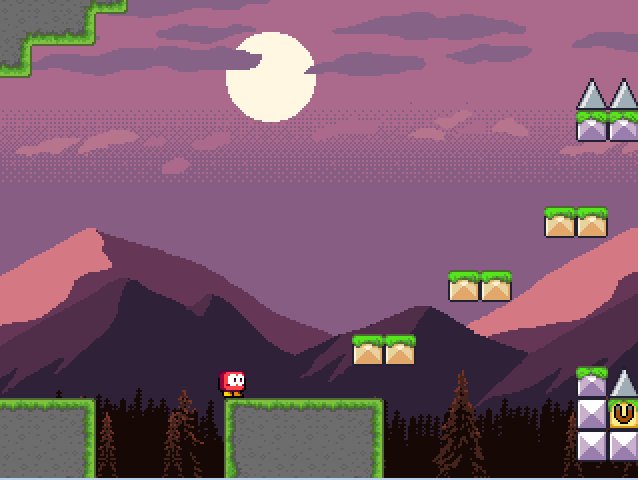 This has been in dev for a long time.
It used to be a commercial game, if my let's play is any indication.
I would like to know why the game page was deleted and resubmitted...
Liberty

Close
11/30/2019 08:54 AM
If I had to guess, probably because it got an overhaul? Maybe it changed engine? Maybe they have a commercial and non-commercial version? Maybe they deleted it at some point for whatever reason and when they came back didn't realise they could resubmit it.
StormCrow

Close
11/30/2019 11:27 AM
I'm slightly stunned to see Libby giving anything a 5 Star review. I don't want to get in the habit of telling anyone how to write their reviews but the presence of multiple substantive complaints in the review text feel at odds with the review score (even considering the extra +0.5 stars).

If I didn't know this was made in GM I'd have guessed it was made in SMBX or w/e it's called. The graphics on display (foreground, background, and platforms) remind me a lot of the ones from Super Mario World and Super Mario All Stars. Like...a lot. Idk if any resources from those games were actually used or there are just only so many ways of drawing trees in the background and blocks of ice you can walk on and so on.

Anyway, unfortunately, not being able to play this with a controller is a deal breaker for me. I cannot play any platformer worth the name with a keyboard it's like...fuck it it's 4:27 AM I'm too tired to make an analogy but it's really hard you give me a USB SNES-type controller and I'm a whiz at anything below super meat boy levels of difficulty, but using a keyboard I probably won't get past the first level.

Edit before passing out face first somewhere: it's cute that the little guy you play as is named boomer. Considering the cultural thing that's going on right now, it would be really freaking funny if every NPC (does this even have NPCs you cant talk to? or maybe just signs) winds up telling him (her? it?) "ok boomer". Well, I would laugh anyway.

Edit aftyer the last edit cuz I lied: I love seeing games like this with only 10 downloads or whatever getting attention/spotlight/love like this.
Liberty

Close
11/30/2019 12:47 PM
I don't give 5 stars often but sometimes a game is just plain fun and deserves it, even if there's a few small niggles. It's definitely a 4.5 star game though, and the extra .5 isn't including the fun factor in it (that's part of the main score) so the bonus for the extra just pushes it up.

Despite the fact it doesn't use a controller, it plays well and like I mentioned, there's good reason that it doesn't. It's not just an arbitrary 'no controller for you' case, it just doesn't fit well with the game style unless a bunch of the gameplay is changed to fit a controller style play (and the game would lose something in that case), so I didn't rate it down for that.

The rest of the game? It's very good. I feel no qualms with ignoring a few quibbles to give it that elusive 5. And they are that, quibbles. Personal preferences that shouldn't bring down the score. They're not at all 'substantive complaints', just thoughts on what might make the experience, for me, a little better - no game is perfect and all that jazz.

I also meant to mention that you can change the key set-up easily enough in the options menu (which you can see I have done to fit my usual RPG Maker set-up). That certainly made it easy to play.
bicfarmer

Close
11/30/2019 10:02 PM
I played both the old version and the new version, and both of them play very well. The two versions actually have very different levels if I remember right. Unfortunately when I played this I couldnt get past the final level and got kinda annoyed having gotten all the way there. Seeing this review I kinda want to download it and try to finish it again. Maybe.

Did you finish the game, libby? Maybe you can give me some pointers for that final level?
Liberty

There's a reason I called it devilish.

I am one of those terrible, terrible people who will grab cheats if something is too painful.
UPRC

Close
02/02/2020 11:34 AM
I have to agree with this review. The game is just SO CHARMING. More importantly though, it's very well designed. Even I, someone who loathes puzzle elements in games to the point where some games I've started remain incomplete to this day because of them, had a lot of fun playing this. The puzzle bits do take some thinking at times, but once you figure out the solution it almost feels like a little "feel good" achievement for yourself.