Weird and Unfortunate is now available in Russian!!! :DDD 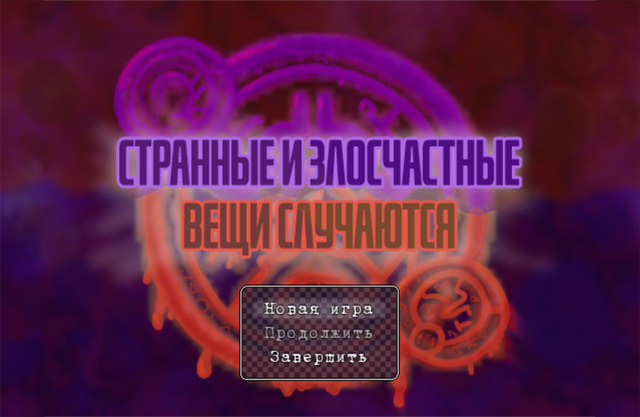 Hello again! I'm super excited to present the Russian translation thanks to bizdick, who went above and beyond with the translation, translating even the scribbles on maps and a ton of graffiti and other stuff! Huge thanks for all the hard work! :DDD

Weird and Unfortunate is now available in Korean!!! :DDD 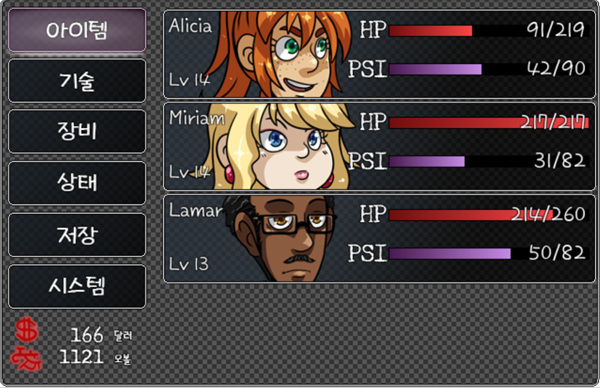 You heard right! W&U is now available to play in Korean!!! :DDD
Many many thanks to TohoTaku for doing all the work to translate the game into another language, that was so awesome, I am very grateful!

You can download the Korean version here, or by checking the downloads tab, or you can grab it here on TohoTaku's web page :DDDD

This is super cool, I'm so happy! Thanks everyone!

Thank You for Voting for Weird and Unfortunate in the Misaos! 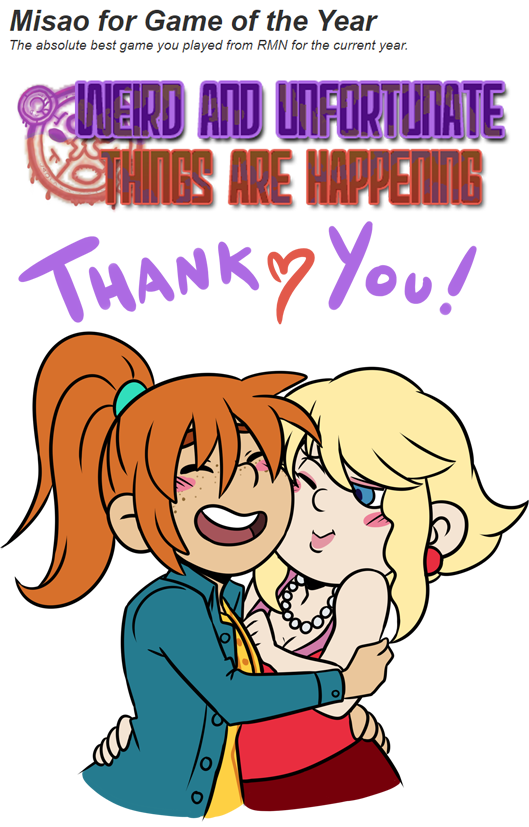 Weird and Unfortunate Things Are Happening won multiple awards in this years Misaos, including Game of the Year, Trippiest Game, and Best Game Title!

A huge thanks to everyone who voted, I really didn't expect to get such an awesome amount of support for this game in the voting! :DDDDD

I want to thank Sooz, Maki, Roden, JosephSeraph and everyone else who helped me bring the game to life over these last five years, and a huge shoutout to all the testers who helped make the game the best it could be!

And I dedicate the Best Game Title award to kentona, who has basically helped me come up with names for the majority of my games, and who can always take a premise and come up with amazing titles!

And again, a big round of applause to Marrend, RpgmakerAddict and LordBlueRouge for handling and promoting the Misaos this year! They were super deciated and the voter turnout was amazing, you three are the real heroes! :DDD

Another new update already, but most of this applies to the post-game, and is really only worth a re-download if you're foolhardy enough to attempt the bonus hell dungeon (doing so is not recommended unless you really want a challenge).

-Map terminal added to the crossroads area (between Fulgham, the road to the school and the area after the clinic) to help players find their bearings if they go exploring

-More details added to the floor of the Makyo underwater area to make it easier to tell rooms apart.

-A couple new NPCs added to the super secret dev room area, as well as another charm you can receive.

-If you break all the seals in the pots in Makyo, then go beat the last boss again, there will be a very very tiny change to acknowledge your deeds. I'm not going to say what it is, but it's still not worth the trouble, really.

This'll probably be the last big update for a while, though I'll try to keep squashing bugs and typos.

Turns out, I got a bit over-ambitious with some of the dungeons in this game, and the Temple of Rebirth was the worst offender. Supposed to be an interconnection of multiple paths that lead to the different ends of the temple, it instead was just too big and too confusing to navigate, plus it kept hitting players with encounters, making them lose their bearings.

I have heavily modified the Temple of Rebirth, stripping out the multiple paths. Now you reach each end of the temple by a single path, and anything else is a side-path for treasure. Because the temple no longer loops around, there are helpful NPCs at two of the dead-ends who will warp you back to the center, should you desire.

To make exploration easier, the temple is no longer an Encounter Bar dungeon, and all encounters are on-screen. You are interrupted much less frequently with battles. And to help navigation, there are now three map terminals spread about the temple which will show your location and the location of the two switches you need to hit to proceed.

Lastly, because there is no more need for wisps of light, they have been replaced with EXP wisps, a new wisp for this dungeon only. EXP wisps will give you a small amount of EXP when collected to reward players for exploring the temple and to even up the EXP difference due to the fact that there are now less battles. The same amount of treasures are still available, some of them have just been shuffled on to other maps.

If you haven't already beaten the Temple of Rebirth, I would *highly* recommend you download this new version and move your save files over. Old save files should all be compatible, though there's one thing to note: if you're already in the Temple of Rebirth, I'd recommend returning to the heal/shop area on your old file and save there before transferring over. Otherwise there is a very slight chance you could get stuck, if you happened to save in the exact place where I put a new map terminal (unlikely, but still possible). 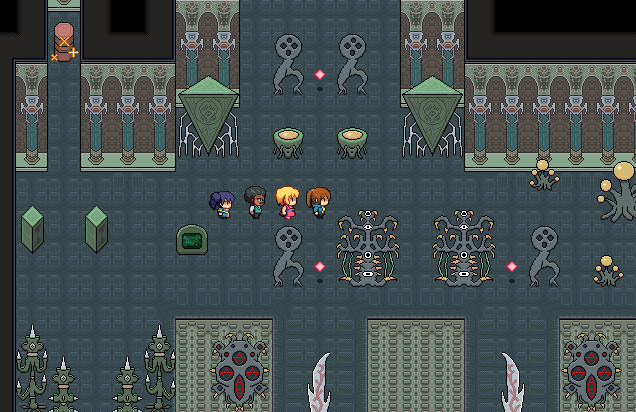 -Map terminals have been added to other particularly difficult-to-navigate areas: Downtown, the last stretch of Fulgham Grove, and F2 of City Hall.

-Monkey's Paw HP Regen Curse no longer drains HP while you walk. I didn't realize how much that made the Regen curse the most terrible thing XD

-If you have too many Fortune Tickets in the final area, a Mushroom Vendor will show up in the Mind Mines entrance and offer to take some off of your hands. He appears if you ever have 35 or more at a time, and will trade them first for a Prism Pellet and then for a random item. This will prevent players from being locked out of the mines by allowing them to dump excess tickets.

I would like to give a shoutout to LetsPlayer The Voice of Dog and his commenters as a lot of these changes came from or were inspired by comments they made. Thank you!!!

Big thanks to Knightowl for finding this, as well as a good deal of other bugs/errors/typos. The script I was using for a lot of the passives applied them at the start of a battle, but did not re-apply them if characters died and then revived.

You'd always get them again at the start of the next battle, but I wanted them to stay for revived characters. It's annoying for a player to spend so much to get, say, Psionic Master, only to not get its benefits if the character dies and is revived.

Luckily, someone named Gamesfreak13563 (cheers and thanks on the off-chance you're ever reading this :DDD) has a script to let states last past death, and that's been implemented, so the problem was fixed, much more easily than I had ever hoped!

The download's been updated to Version 1.03 with this fix, and several other small ones. If you want your passives to last even past death, then I encourage you to download this latest version and move your save files over.

Also, I just want to thank everyone again for all the attention this game has gotten since release! It's really been overwhelming in the best possible way! You are all amazing and I am so thankful! :DDD

Weird and Unfortunate Things Are Happening is FINALLY FINISHED!!!! :DDDDDD

You can download it right now here or just hit the download button on the upper right side of the gamepage! I'll be uploading it to itch.io and gamejolt shortly as well!

Any of your old save files should still work with this final version. Just copy them over to the new game folder and run the game! Let me know if, for any reason, your game save doesn't work when you move it over. 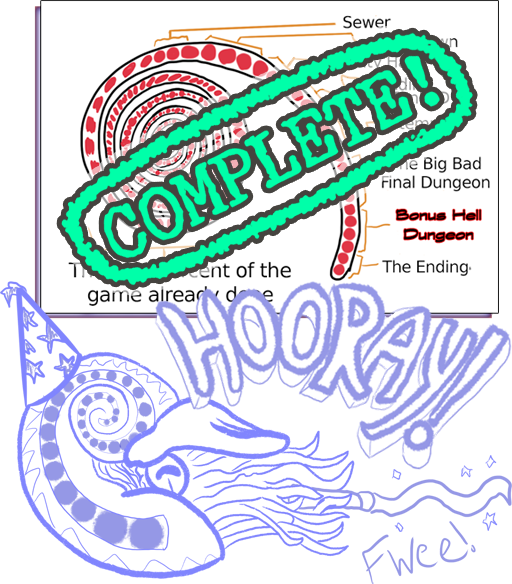 I am so happy to finally bring this game to completion. It's been five whole years since I started, and I feel like so much has changed since then!

There are too many people to thank, but I want to especially thank Sooz for doing an amazing job at transforming the endings' dialog to greatly improve the ending's impact, in my opinion, and putting up with me needing her to edit and write so much dialog! XD

Big thanks to all the testers, especially Malandy, Todpole, Sgt M and pianotm for going above and beyond with their testing!!! Big thanks to Maki for finishing all of the various poses of character art I needed, and big thanks to Racheal for some much needed script help!!! Big thanks to Lewmoth for composing the awesome final battle theme. Thanks again to everyone else who worked on the game! I was so fortunate to work with so many awesome people!!!

Aside from fixing any big bugs or problems that arise, I'm going to take a break from game dev for the most part, aside from scribbling new ideas on my sketchbook and practicing drawing. I need to catch up on playing other people's games for a while!

Anyway, thanks again! :DDD You are all amazing and I hope you enjoy the game!!! You're all magical to me! ^_^

Over the next hour or so, I'll be sending the final test build out to all testers! :DDD I am so nervous but also so excited!!! If I somehow forget to send any one of you testers the build and a few hours pass, please let me know and I'll get it to you ASAP!!!

It's been almost five years since I started this project, and it feels amazing to be so close to the end. A huge thanks to all the testers and everyone who's helped me and cheered me on all this time :DDDD <3

I've been silent for a bit, but things have been moving forward, slowly but surely. In the next week or two, the final build should be ready to send out for testers, and I couldn't be happier!

This build will have the full game for testers, aside from a few placeholder images and some dialog that's not finalized.

Thanks again for everyone's patience, we're almost there ^_^

Call for Testers for an Incomplete Final Build

It's been about a month since the last blog, and things are coming along slowly but surely! It's going to probably be another month or so before all the dialog gets edited/rewritten, but a lot of it has made it into the game proper (a huge thanks to Sooz, you are amazing and wonderful <3<3<3).

I was thinking, however, that the game is pretty big and there's a lot of content that needs testing, so I wanted to see if any testers were interested in getting a head's start with playing what we've got so far. About half of the new content is ready to go (aside from a couple of placeholder images).

Anyone who wants to test, please leave me a comment, and in the next day or so, I'll send you the build, which will tell you to stop at a certain point in the City Hall dungeon. When the full build is ready, I'll send that over and you can move over your saves :DDD

To anyone who wants to wait for the full build to start testing, that's absolutely fine! Feel free to go ahead and comment below, just let me know that you'd prefer to wait.

Thank you so much, everyone! :DDD I can't wait for your feedback!
Pages: first 1234 next last