Just wanted to make a quick blog to let everyone know that after several months, the final dungeon is done! Here's our good friend the Progress Nautilus: 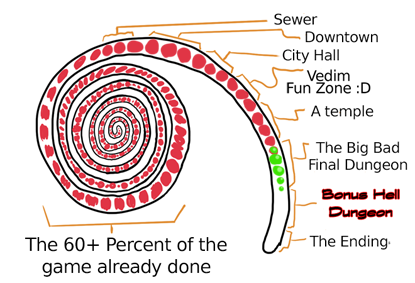 The final dungeon took so long because I decided each little area needed its own tileset. That was a bit overboard of me, but now it's done and I couldn't be happier!

This brings us to the final boss, which will be another multi-part extravaganza with several forms to battle.

Not gonna get into any details now, but if you want a small sneak peak, I'll put a silhouette of one of the forms I'm working on under this hide tag. 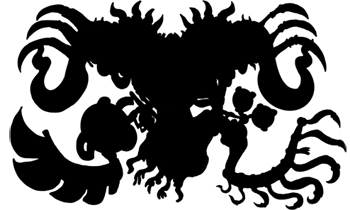 Close
04/25/2020 04:55 PM
Depends on what you count as a phase. If you wanted to, you could boil the final battle down to 2 parts, but each of those parts have multiple forms with different attacks and a flow and sort of story to them.

I want it to feel like you're really going up against something that's hard to kill; I'm going a bit overboard on the final boss, but trying to not make the battle itself take _too_ incredibly long.

I have actually been thinking about finishing my playthrough of this.

author=todpole
Each major boss so far had three phases so how many are looking at here. The same. Five. 100?! No that's too much.

Hmm... Depending on how good at the game you are... The game makes itself more phases, and more and more impossible, the longer you make the fight go, because your party sucks too much...

*Boss after three? Five forms?*
THIS IS NOT MY FINAL FORM!
NeverSilent

Close
04/27/2020 02:35 PM
Wow! I can't believe you're so close to the finish line. I've been looking forward to seeing this game completed so much! Best of luck and success with the final parts, unity. And remember to feel proud of yourself! A lot.
DungeonDevDude

author=NeverSilent
Wow! I can't believe you're so close to the finish line. I've been looking forward to seeing this game completed so much! Best of luck and success with the final parts, unity. And remember to feel proud of yourself! A lot.

Haha, I will! And I do feel proud! :D I'll feel a lot prouder when I'm actually done, tho XD Thanks NS!

Thanks so much! Just a little more to go!
Dyhalto

(although I should probably stop saying that. I think I'm causing 2020)
DungeonDevDude

author=kumada
Yessss. I can't wait for more Weird And Unfortunate Things to Happen.

(although I should probably stop saying that. I think I'm causing 2020)

Hey, at least we’ll get a good game out of it.
eplipswich

author=eplipswich
I'm definitely giving this game a go when the full release is out. Well done, unity!

Thanks so much, eplipswich! :DDD I'd love to hear what you think after giving it a try ^_^
Pages: 1