Unfortunately, I have a bit of bad news. I have been testing a global save script and a couple of days ago, when fixing a small bug, I forgot to take this script out and released an updated version of the game on the site, and it turns out this script majorly doesn't play well with other scripts I'm using.

What this means, unfortunately, if you have downloaded the game in the last couple of days, you may have a borked version of the game. If you have the version titled "Weird and Unfortunate 60 Percent v108" then you have the bad version.

The good news is that I've already got v109 uploaded and you can get it now on by hitting the download button. The bad news is, if you grabbed the bad version, your saves from that version will cause crashing in any version of the game so you'll have to start the game from scratch.

I apologize for this and this is an unacceptable error on my part. Luckily, only a few people actually downloaded this bad version, and hopefully didn't sink too much time into it, but still this is horrible. I will be much more careful in the future and try to make sure something like this never happens again.

TLDR: If you downloaded the game within the last couple of days (file named Weird and Unfortunate 60 Percent v108) your game is bad and your save files unusable ;_;

I am so excited to announce that the 60% Version of Weird and Unfortunate Things are Happening is now live and available for download!

If you still have your original save file from the old demo, you can move it over to the new release and continue the game from there. Unfortunately, I goofed, and the game still replays the ending of the demo before letting you continue the game ^^;; It still works otherwise.

I can't believe it's been almost three years since the original demo released. It took me quite a while to get this version finished, but I'm so glad it got done. A huge thanks again to all the testers for a ton of wonderful feedback and a lot of cool fixes and corrections that made the game play better. And here's hoping I can get the rest of the game done faster than this part took me XD

Thanks again everyone, and please enjoy!

Hello everyone! After working on the 60% release very, very slowly over the past months, it is now DONE and ready for testing :DDDDDDD

Hello everyone. I've been putting off this blog for a long while, but I've come down with some medical issues that make doing creative work really, really slow right now.

On one hand, the release is really, really close to being done. Gameplay and graphics are all done for the 60% release. All that needs to be done is some dialog tweaking and a bunch of eventing to get the rest of the scenes from the script into the actual game.

But for the past two months, I've been confined to bed. I've gotten to the point where I can slowly work on games again, but it goes so slow right now. I don't know when I'll get back to normal but it could be months, so please be patient with me right now.

The last thing I wanted to do was announce more delays. But hopefully I will get back to normal soon and back to making games at my regular pace.

Hello everyone! :D Hope things have been going great for you all!

I'm working hard on what I'm now calling the Weird and Unfortunate 60% Release, which is a playable release with roughly 60% of the total game's content on it.

Whenever anyone asks "how long until you get this release done?" I keep telling them "Umm... about two months!" I think I've said that like three times in last several months XD;;;

Unfortunately, real life isn't cooperating with me as much as I'd like these days between sickness and crazy stuff at work, so things are going real slow. I hope they will speed up now that I've recovered, but I'm still going to say "two months" and hope I can get it done by the end of June. Almost all the gameplay is done. I gotta finish the last of that up, then work on the dialog some more, and lastly, fill in some resources (mostly tileset stuff) that I haven't gotten all finished yet ^^) and then I'll be ready to send it out to any testers still interested before the public release!

tl:dr version: new release coming soon, maybe in two months, working on it, thanks, love you all and thanks again for following and supporting this game!

Wow! This Saturday, it will have been two whole years since I started this project! How time flies!

I wish I had been spending 100% of the time available during these two years developing the game, but the truth of the matter is, I spent about half a year on unrelated side projects (>.>;;;) and another half a year was pretty slow because of job loss and getting used to another job.

But still! Things are progressing pretty smoothly now, and I've gotten my productivity back to about where it was before. So let's check up on the game's progress so far! Progress-o-meter, I choose you! 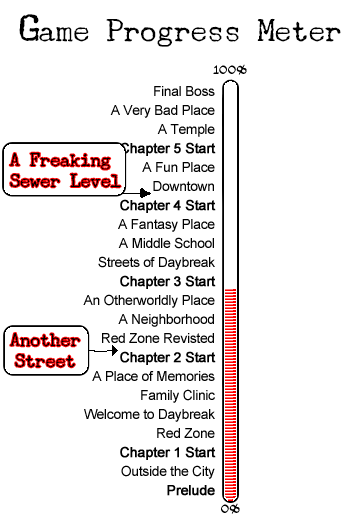 Some things to notice: First, I've added two levels: One, "Another Street," which links the area behind the clinic to the Neighborhood level more smoothly, and an upcoming Sewer Level to link the area around the Middle School to Downtown a little better (also, a small bit of the story has been moved there for pacing).

Also, if you look at how the meter has filled up, it looks like I'm about half done with the game, right? However, I don't think that's entirely accurate, as Chapter 4 and especially Chapter 5 will be a bit longer than the previous chapters, despite the fewer locations listed (and they're listed pretty vaguely to keep things mysterious) so I'd say I'm closer to maybe 40% done with the project.

After I complete Chapter 3, I intend to release a final demo of the game. This will contain a good 50-60% of the game, and will hopefully hold you over until the game's full completion ^_^ I am aiming for an early-to-mid 2018 release for this final demo, with the full game hopefully releasing late 2018 to sometime in 2019, though its hard to predict exactly when it'll be done.

I know I haven't been releasing many new screenshots or sneak-peeks, but I want to keep a lot of the content hidden for when you actually play the game.

So there you have it! I am super excited to share this game with you and all of its little secrets, and I'm hard at work getting it done. Thanks again for following this project and I'll see you next time!

Hey everyone! I realize that earlier this year I made a sort of "I'm still working on this" blog, and here I am, half a year later, making another one.

Since then, I have been continuously working on the game, albeit much slower than I hoped. I lost my job earlier this year, and getting several new jobs and getting used to my new situation took a lot of time away from my game-making, as well as adding a lot of stress.

BUT! Things have been improving for me! I'm finally gotten a schedule that allows for more creative time, and I'm on much more stable ground. I've put more work into WaUtaH in the last two weeks than I was able to for a month previously!

I still want to get a new demo out soon, but by the end of this year seems unlikely at this point. I am hoping for an early 2018 release for the next demo (which will feature about half of the full game).

Just wanted to let you know that I'm (still) working on this, and I don't plan to give up any time soon! :DDDDD

Meanwhile, please enjoy a collage of some of the monsters you'll encounter as you progress in the game: 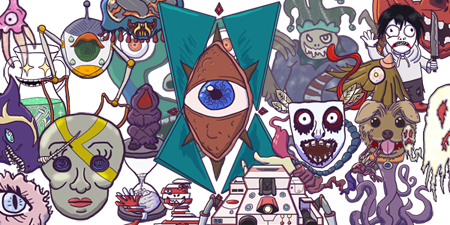 Hello everyone! Sorry for being mostly radio silent on the progress of this game!

2016 was a bit nuts for me. It's been almost a year since the demo was released, and while I've still been working on the game off and on since then, a heck of a lot of my time for the rest of 2016 was spent on a long series of collaborations.

Several of the collaborations still haven't been released, but the ones that got a release in one state or another are: Bloody... and To The Tower's Top for the Swap in the Middle With You event, Ascent with Ziggy and Jo for the 3rd McBacon Jam, and Remie and Alana with Ocean and Kloe for the Yuri Jam. Then 2017 rolled along and I had a bunch of ideas for quests for the Winterruption game and ended up making Quest Questers.

The long and short of it is that I've been a very distractable dev and thus this game has been somewhat neglected. But that's changing! I feel like I do my best when I can hone-in on a single project and since Quest Questers, I've been spending all my dev time working on Weird and Unfortunate again! I'm very excited about the results, and should have several new screenshots to show you very soon!

While I originally wasn't going to do any more partial releases and just finish the game, given the delays, I think it would be a good idea to have another released demo with a good chunk of the game released sometime this year and have the game finished, if all goes well, in 2018.

Thank you all very much for your patience and I'll try very hard to keep any side projects to a minimum! (I get easily excited by RMN events >.>;;;;;;)

Thanks so much for following this game and I intend to work hard to get more content to you as soon as I can!

I've uploaded a new version of the demo with an expanded intro! :DDDD Huge thanks to Pizza and Liberty for the advice to expand it!

Also a really big thanks to Maki for new character expression art, which also appears in this update! ^____^ 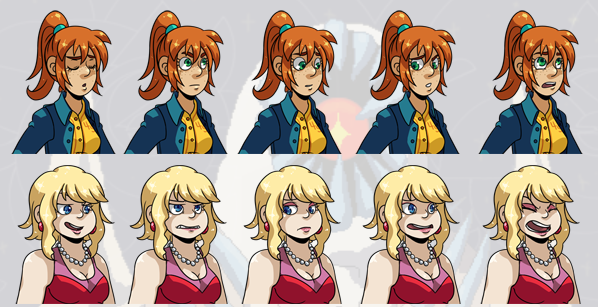 Also thanks to Indrah for giving me advice on how I was handling wall tiles.

There's not much new as far as gameplay goes in this update, I'm afraid, aside from some minor tweaks. But if you do decide to give it a play, I hope you enjoy the expanded intro and the extra artwork :DDDDD

The Demo is Complete! :D

After much testing and tweaking, I am overjoyed to announce that the Weird and Unfortunate Things are Happening Demo is now live and available for download! :DDDDDDDD

A huuuuuge thanks to all my testers and your dedication and advice. I apologize to the few of you who didn't have time or had other issues. I got such a large amount of feedback that I went ahead and made the fixes and prepared the public download (However, I still welcome your comments after you're able to play :D )

Super special extra thanks to Red Nova, MakioKuta and Racheal for going above and beyond when it came to helping me with this! Also thanks to Formar for being awesome! ^_^